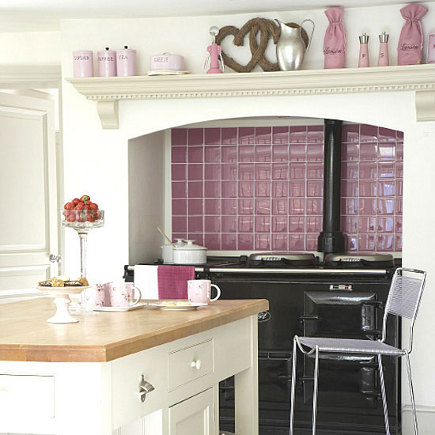 Grayer than magenta and softer than fuchsia, mauve is a muted purple Victorian color that can range from dusky rose-ish to grape. Named during the late 19th century after the mallow flower, it is a color that is currently seen on upholstery, especially in England and in mauve ceramic tile found in kitchens and baths. Not only does it blend beautifully with whites and grays, the most muted variations can be visual shifters in combination with stronger hues. Although I’ve written about a Purple Cabinet Kitchen and Shades of Purple Bathrooms, mauve ceramic tile sounds offbeat but looks stunning in a kitchen. Used in a tone-on-tone scheme with Farrow & Ball paint  – and perfectly framed in the back of a niche for a glossy black Aga cooker – this offbeat tile color creates a focal point with real visual excitement in what otherwise be the type of  white kitchen seen over and over again. 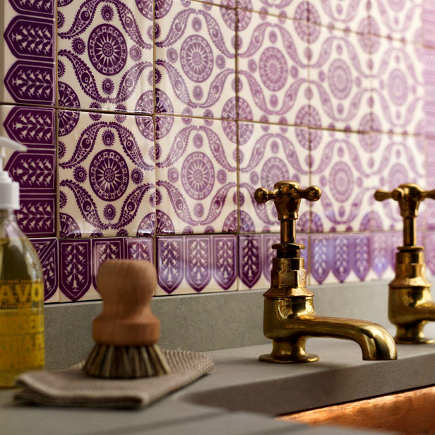 Patterned ceramic tile, also in the mauve family, looks sumptuous as a backsplash for a bathroom sink bordered by limestone and appointed with natural brass pillar taps. One of many distinctive tile ranges based on a fabric designs, this Ottoman II tile panel (in magenta) from TexTiles was inspired by a 17th century Turkish velvet fabric but looks nearly as smooth.