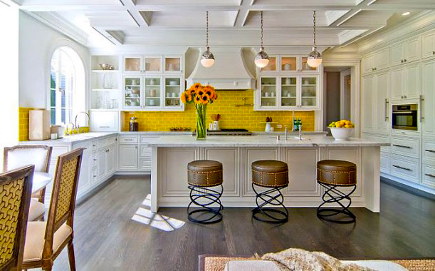 Yellow is the most visible of all colors. That’s why yellow kitchen features show so well.

That’s also why yellow used for traffic signs, pavement markings and for low-vision computer keyboards. I knew it was the lightest hue but never connected that with it being so easy to see. It’s also the color of the sun as well as many foods, and known to be mentally stimulating and cheerful. So while it might not be the most popular kitchen color (though I chose it for mine) yellow kitchen features are a logical choice to draw attention to some aspect of the room.

For a suburban style kitchen-great room [top], Virginia designer Barry Dixon used taxi yellow backsplash to brighten the business side of a huge space with abundant natural light. Keeping tile confined to the area below the cabinets and hood on the range wall, and suppressing it further below the window on the short leg of the cabinet run, helps keep it from taking over.  Across the room a compatible yellow is reprised for upholstered chairs around the dining table while the island stools remain neutral. For me, this is a “swath of color” strategy designed to set up the kitchen as the dominant space in a multipurpose room. 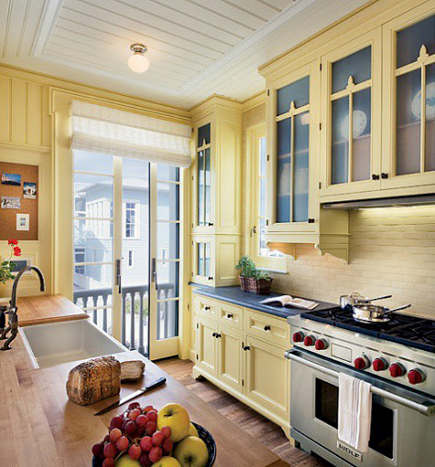 A small but very charming urban cottage kitchen takes advantage of a daffodil hue to point out beautifully detailed cabinets. Whether new or old, the unusual motif on the one-over-two divided-lite uppers suggest an early 20th century style transition from Victorian with Arts and Crafts. Black counters on the range wall blend well with the grates on the Wolf. Across the aisle a farm sink mounted below a wood counter feels logical for the space and the chest-on-chest arrangement in a difficult corner shows a real understanding of how to create essential storage. There is a bit of a mixed message in the Federal style door frame on the left side of the balcony sliders but the yellow holds it all together with the same authority we saw in the equally atmospheric Sunflower Cottage Kitchen. 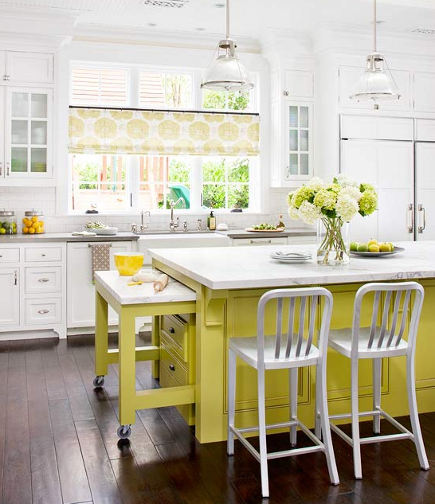 Were it not for the citrus color on the island, this could be any white kitchen, anywhere. There’s plenty of equipment, the usual white farm sink, paneled pro-style fridge and freezer, Restoration Hardware Keynes Prism Pendant lighting and Crate & Barrel’s Delta bar stools. All very nice but nothing special until you come to the end of the island where a marble-topped table on casters is cleverly worked so that it pulls out to become a baking station or a portable serving cart. I love this feature and don’t understand why it’s not done more often because it’s both flexible and functional. Whatever. At least the color of the island base helps to point it out. Yet unlike the hue of the backsplash (above) this yellow almost functions like a neutral. 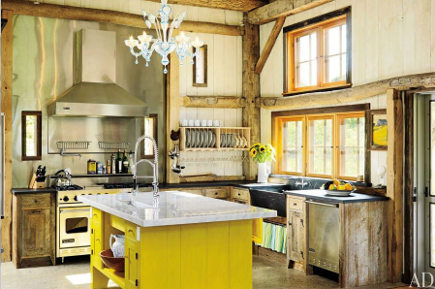 I’ve seen mixed messages in kitchens and this one definitely falls into that category. For me, it looks like a stylist from Anthropologie got trapped in the Adirondacks. I see a real disconnect between the Murano glass chandy over a girly sunflower colored island topped with polished stone and Dornbracht’s Profi combo faucet (an iconic minimalist piece) set down in the middle of a half-timber barn. And reclaimed wood cabinets and a soapstone (or maybe slate) skirted farm sink are speaking a different language to me. But style is often in the eye of the beholder. Perhaps there is meant to be tension in the décor, which the yellow definitely amps up and my decoder ring has simply malfunctioned.