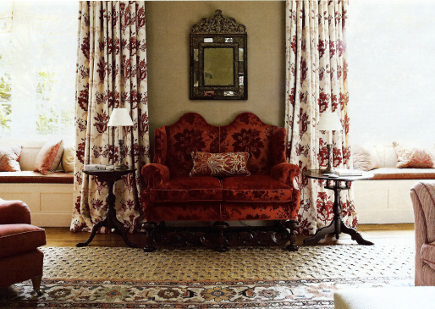 Out of habit and curiosity, I look at dozens of living room and bedroom photos each week. A majority of those rooms have curtains on the windows – some ready-made and others custom. Yet only occasionally do I see custom drapery details with a level of perfection that comes from deep understanding of how to properly dress a window.  Many of these are little works of art due to their fine craftsmanship and detailing. But because they are house fittings they rarely attract the attention they deserve. Perfectly crafted curtains are slightly billowy at the bottom and break on the floor. They stack back neatly on top. Their leading edges – which face into the window – often have subtle details.

Two breathtaking examples can be found in a 350-year-old manor house recently redone by London designer Guy Goodfellow, former director at Sybil Colefax & John Fowler. It’s a large house, originally dating from 1650, according to the House & Garden feature. It now combines old and new. In the expansive library [top], draperies were made in a cabernet floral-print on natural linen (from B.Berger). 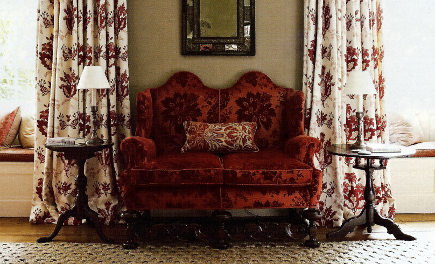 Their luxurious fullness (2-1/2 to 3 times is the bespoke standard) allows them to flair slightly on the bottom and rest gently on the floor. Hems remain full — not pressed. The fine point here is the fullness in addition to the extra few inches in length – I think of this as the “ballgown” effect – which is quite distinct from straight up and down draperies that hover above the floor. 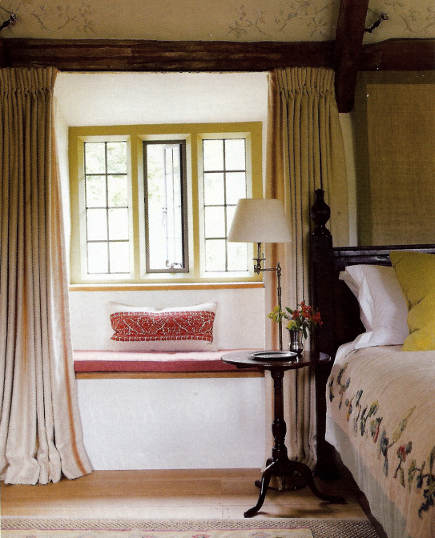 A bedroom in the same house has equally gorgeous curtains tucked directly under the ceiling beam to help frame the rather low, small window. These, made with Colefax and Fowler’s Skomer linen have a subtle red strip on the leading edge to call attention to the red detailing in the little window seat. For me, the allure of the custom drapery details is the tight pleating and weighty simplicity that give these rooms a real sense of luxury.

Copy and paste link to quick-share this post:  http://bit.ly/14xSM6N