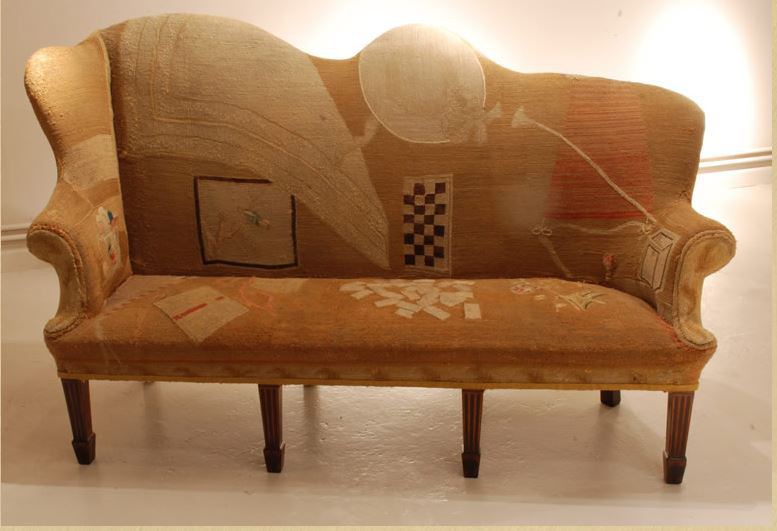 A work of art, this antique needlepoint sofa has stunning details and a fascinating history.

During the late 18th century English women were known for certain attributes: the size of their hair and the cut of their dresses. Georgiana Cavendish — the ill-fated Duchess of Devonshire – also was a famed beauty, disastrous love affairs, and gambling compulsion eventually did her in. So it’s not surprising to see a basket of wool, a ladies’ tasseled bag, a folding game board, or a shawl depicted on an antique needlepoint sofa covered by a large scale piece of Georgian-era needlework. These were certainly elements of a woman’s world in Great Britain ca. 1800. What is extraordinary is finding a George III sofa or settee with original gros-point needlework upholstery that is not in shreds by now. (FOI: George III is the British monarch who “lost” the American colonies to the 1776 Revolution). 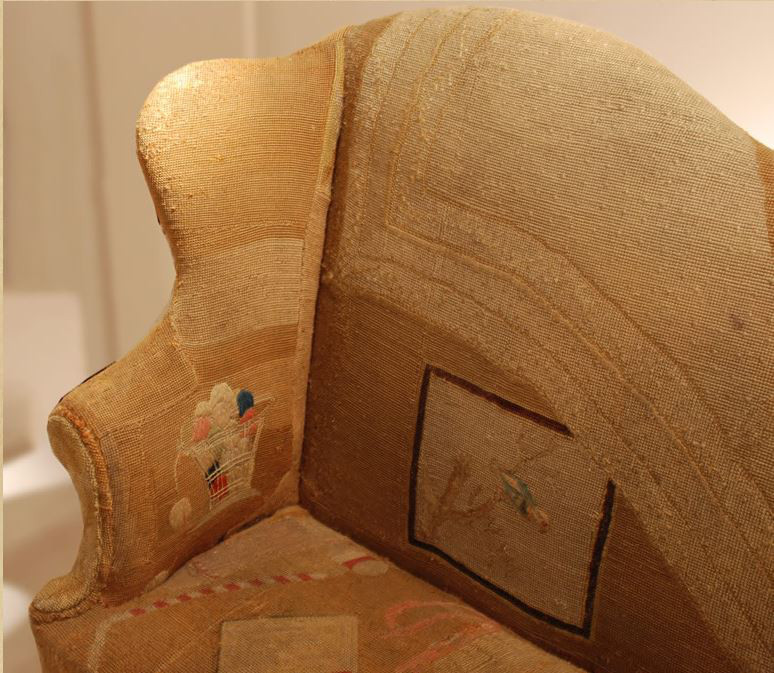 One look at this piece of seat furniture, with a trompe l’oeil shawl draped over the back, and you know there is a fascinating story behind it. However, my favorite magazine, The World of Interiors, enlisted the current owner to tell his part of that story recently. But only a small part. 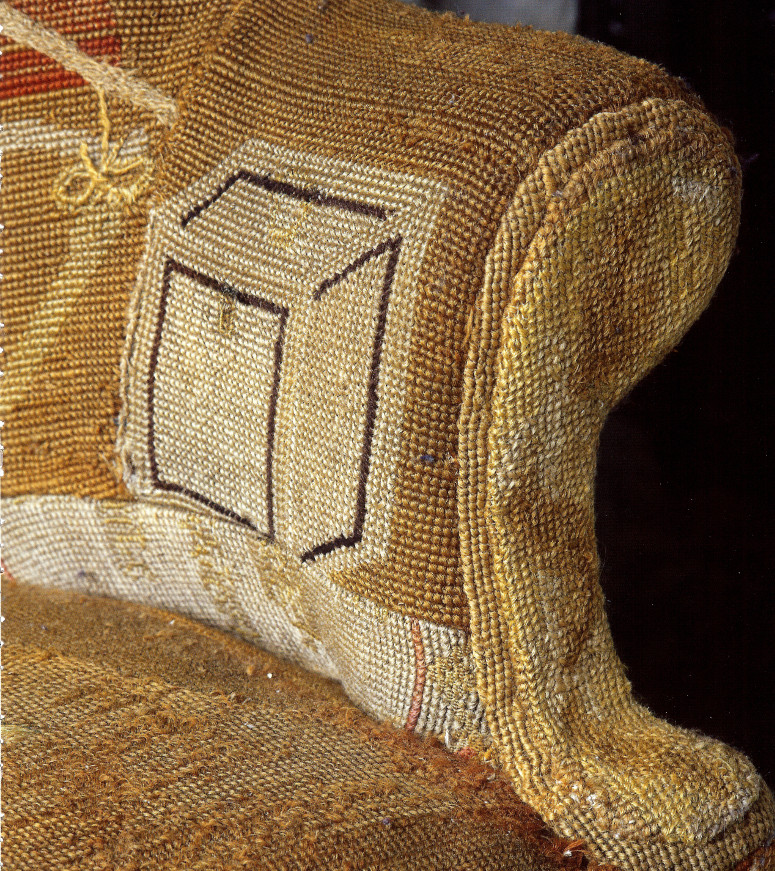 Who created this amazing and charming needlework? That includes a box which must be a tea caddy on one arm — tea was fabulously expensive during the 18th century and a caddy was prized in any home. 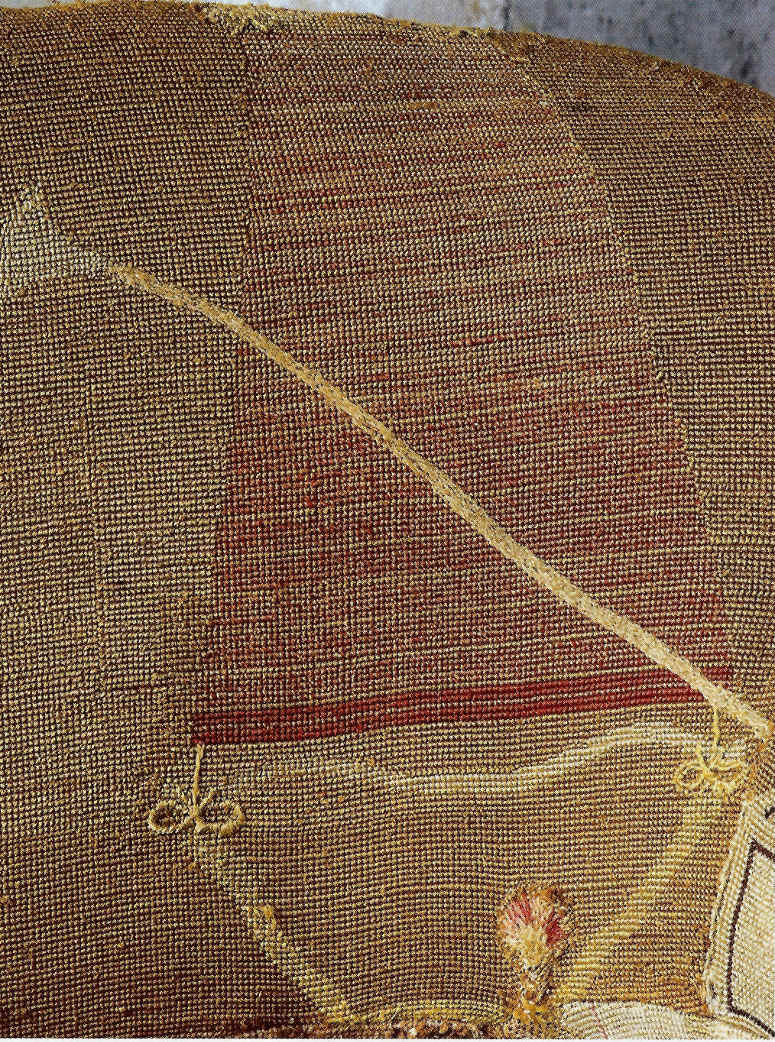 Was the tapestry sewn for the sofa or repurposed? Was such a personal piece of furniture made for a lady’s boudoir (the tasseled bag is upside down) or did it find its way into a more public room? Was it considered a crazy piece in its own time? 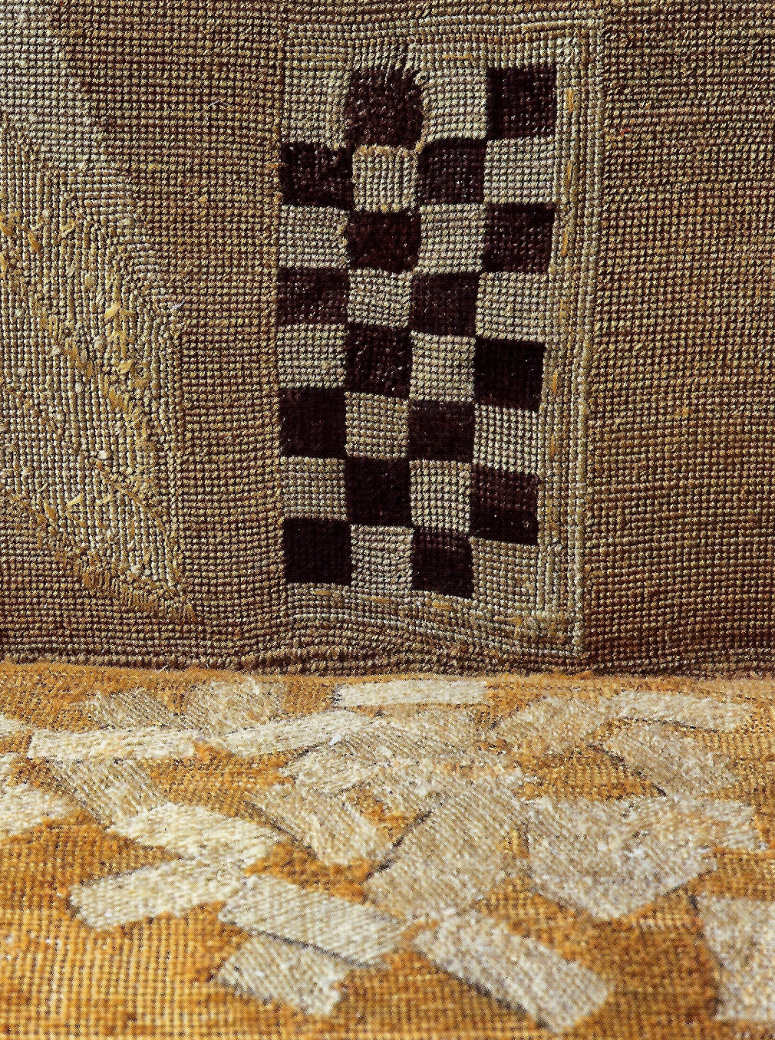 And, apart from the obvious sense of playfulness in the design (which includes a folded game board), why does the back have such an odd shape?

The current owner appears to be British antiques dealer Christopher Gibbs, who has a long and fashionable history of his own, amusingly chronicled on A Dandy in Aspic. And we know that Mr. Gibbs purchased the sofa from antiques dealer Edward Hurst recently enough for a few photos to remain on Mr. Hurst’s website at the time of this posting.

In the WOI piece, Gibbs recounts first seeing the sofa in the home of a Peruvian diplomat and dandy of his acquaintance in London more than 50 years ago. The diplomat’s aunt, one Madame Eugenia Errázuriz, said to have been a patron of Picasso, Stravinsky and Le Corbusier, had furnished the house and is credited with acquiring the sofa. (Was the little embroidery bird possibly the creator’s beloved pet?) 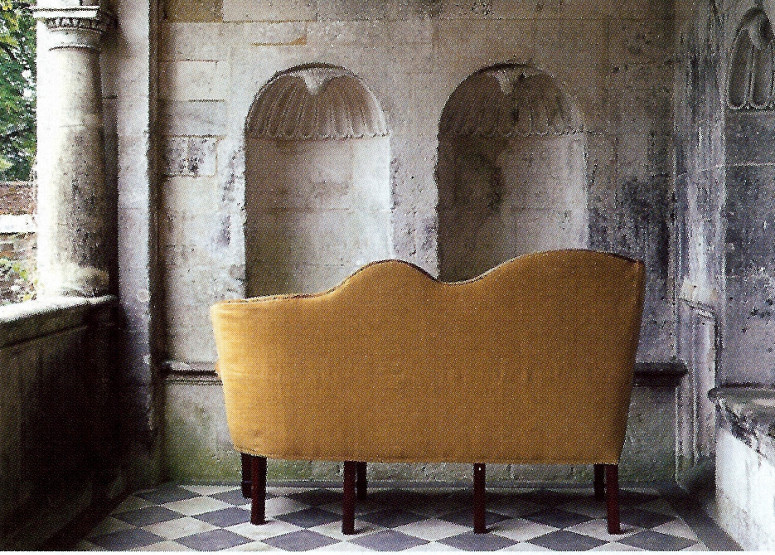 When the contents were dispersed many years later, Mr. Gibbs purchased the sofa but, being an antiques dealer, he then sold it to Evangeline Bruce, the wife of American Ambassador David K.E. Bruce, something of a legendary beauty herself. Mrs. Bruce died in December, 1995. Thereafter, the sofa (according to Mr. Gibbs) was sold at auction by Christie’s. Indeed, the Christie’s catalog for Sale 7746 on September 19, 2009 in London includes Lot 148,  with the provenance “Mrs. David Bruce, Albany, London.” The hammer price is recorded as (£9375) $15,506 (the estimate was $2,477 – $4,128) and was described in the catalog as:

Sadly, this is all we know. But, in a way, it’s as much as we could expect.

Copy and paste link to quick-share this post: http://bit.ly/11wlqaZ