You are here: Home / Decor / Collecting / Bronze and Enamel Tables 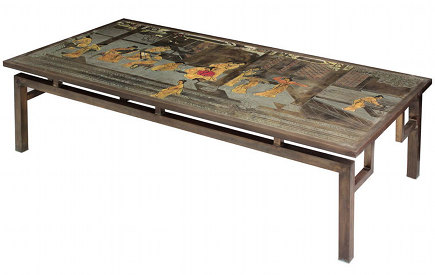 A Philip and Kelvin Laverne metal table is an elaborate work in bronze and enamel.

From the early 1950’s into the 70’s, New York father and son artisans Philip and Kelvin Laverne created furniture and decorative arts from metals, including enameled bronze over pewter tables.  A Laverne metal table is an elaborate hand applied-enamel piece would be buried for six weeks enabling the secret mix of soil to react with the acid-etched design, thus creating a fabulous patina.  The Lavernes designed many one-of-a-kind pieces while others were often limited to editions of twelve.  I admit to having a soft spot for the Chin Ying coffee table, as I learned to walk around the one owned by my parents.

The scene depicts women celebrating the rites of spring.  The varying chemical reactions allow each table to be unique.  While the clothing on this table is mostly yellow, the clothing featured in my parent’s table contains more blues. 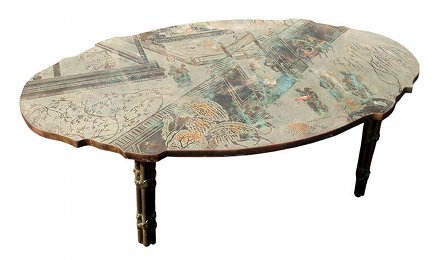 The Chan Boucher table has the form of a carved oval arabesque. The legs are tied with French “ribbons.” 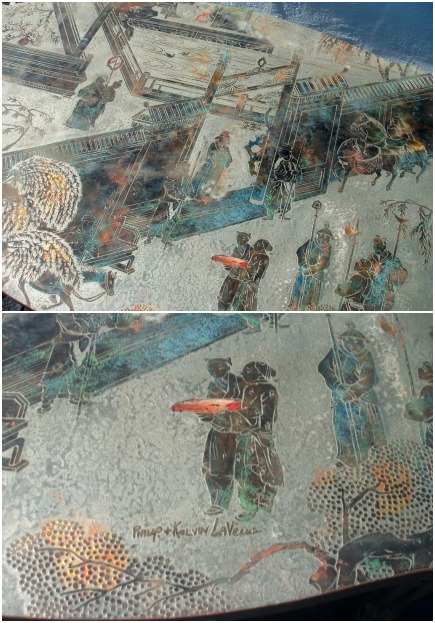 The scene depicts villagers taking gifts to the Emperor’s child in honor of the harvest.  Intricate details are seen in the architecture and clothing, and also in the animals and trees or flowers depicted in many of the Laverne pieces. 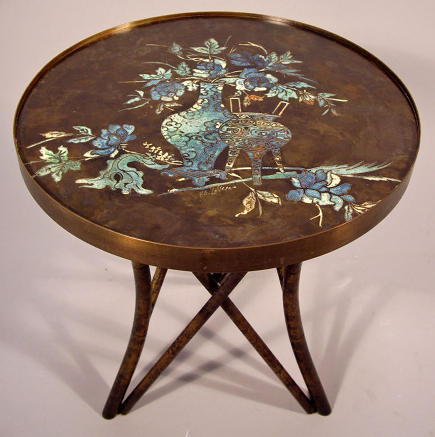 The top of this brass occasional table features a cerulean blue vase, bowl and flowers in the Japanese style.  Intertwining brass bars form the legs.   Laverne bronze pieces are sought after pieces by mid-century modern collectors.  The pair advertised their creations not only as functional art, but an investment, which still holds true today.

Copy and paste link to quick-share this post: http://bit.ly/Z2j2Ge