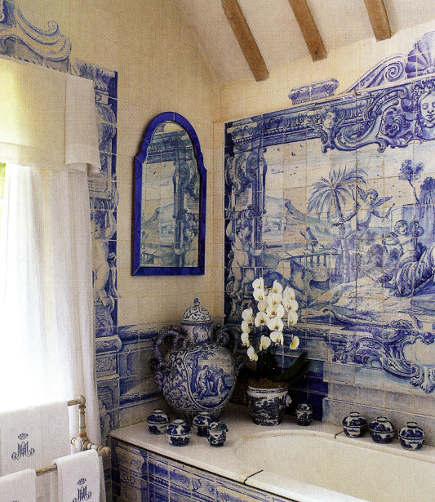 How a blue and white tile bathroom, done in 300-year-old Delft, can still rock the house.

As an admirer of blue and white tile bathroom combos of every description, I couldn’t resist the opportunity to comment on a blue and white tiler in England, plus a more modern one from France. While each could be described as traditional, I’d be remiss to not also call them extravagant – because they are. But even an over-the-top contemporary bath based on original Delft historical-tile style is not always easy to pull off– at any price.

The stately home of British designer Anouska Hempel [top] has a bath based on antique scenic Delft tile. Tile murals over the tub [top] and the sink [below] include cherubs and a palmetto tree which were chic motifs for 18th century Dutch tile makers. The murals are connected by scenic wainscoting and – perhaps most impressive of all – a tile-framed window with an elaborate scrolling rocaille crest incorporating elements of leaves and shells. The wide-plank floor features a Delft-tile border (a corner of that can be seen at the bottom right of the photo below). The tub deck is equally Delft, while the sink vanity is faux-painted to match. 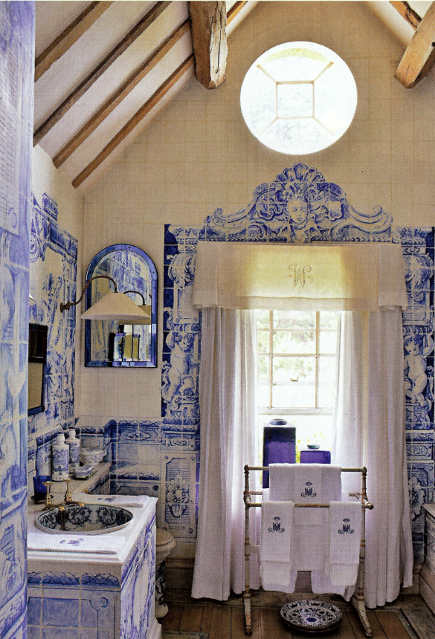 An assortment of blue-and-white Asian and Italian porcelain objects, as well as mirrors edged in cobalt glass, show Ms. Hempel’s  depth of commitment to blue-and-white. I don’t find curtains in a bath especially modern but the simplicity of the plain white linen-look panels, topped by a graceful monogrammed pelmet (a sort of frame-within-a-frame), is a nice soft touch. 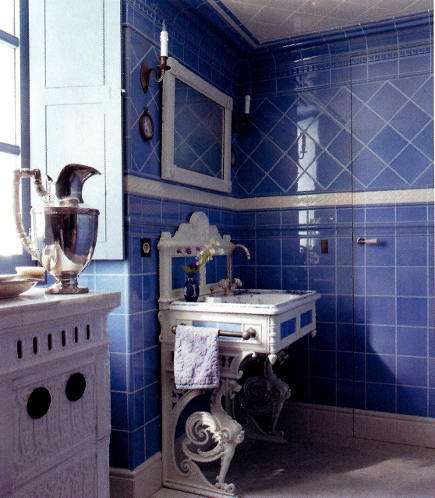 Robin’s egg blue – Marie Antoinette’s signature color – is a powerful bathroom hue not used much since the 1950s. However, the young Parisian designers Michael Coorengel and Jean-Pierre Calvagrac resurrected it for an elaborately tiled steam bath in an 18th century manor house they renovated in Bordeaux.  Sweetened by a white tile ceiling and listello border with a Louis XVI-style relief, the wet room also includes a love-it-or-hate-it white-painted Victorian cast iron console sink with griffin supports. Another intriguing aspect is the tiled door that appears hidden in the wall, betrayed only by the white porcelain handle. All so French and such a small portion! I’d love to see a more.

Copy and paste link to quick-share this post: http://bit.ly/YmSSgV