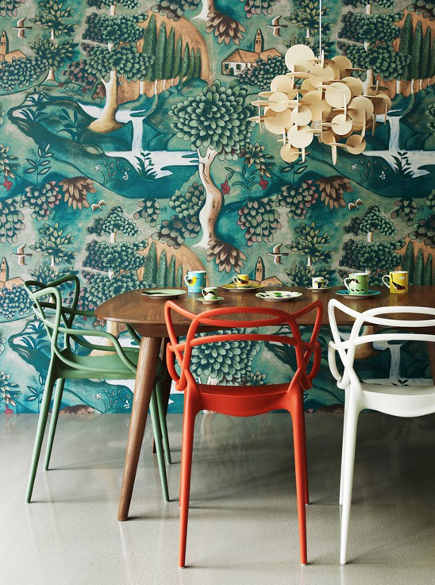 When artists and designers create boho style rooms with looks that are fanciful and offbeat, it’s always interesting to explore their visions. Boho (short for Bohemian) is a catchall term that moved over from fashion to interiors. The boho walls I wrote about back in August had a more informal look that this trio, fished from Pinterest where such eccentric rooms have an avid fan base. Of course, it’s the flamboyant images that count — chief among them (and most attainable) the Zoffany Verdure wallpaper [top] by Melissa White — a fantasy forest scene inspired by a late 17th century wallcloth.  For me, the meandering colors and shapes writ large on the wall have a marvelous dreamy quality that transports the mid-century furniture and lighting, even the noteworthy 2011 polypropylene Masters chairs by Philippe Starck for Kartell, which Allison also has posted about. 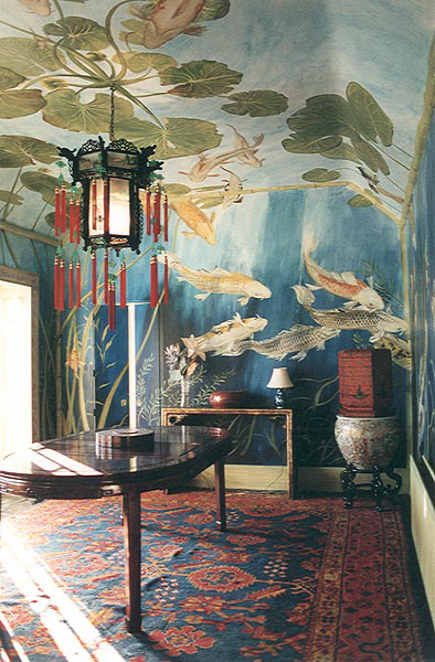 Koi (and other exotic fish) swimming among the lily pads on a dining room ceiling and walls, put us in the middle of a fish tank! The Michael Dillon mural evokes a traditional Chinese motif and is supported by the ebonized lantern chandelier and other Asian furnishings. Koi lovers can evoke a similar feeling with colorful Koi wallpaper. The blue field color of the Oriental rug supports the watery aspect of the walls with perfect pitch. 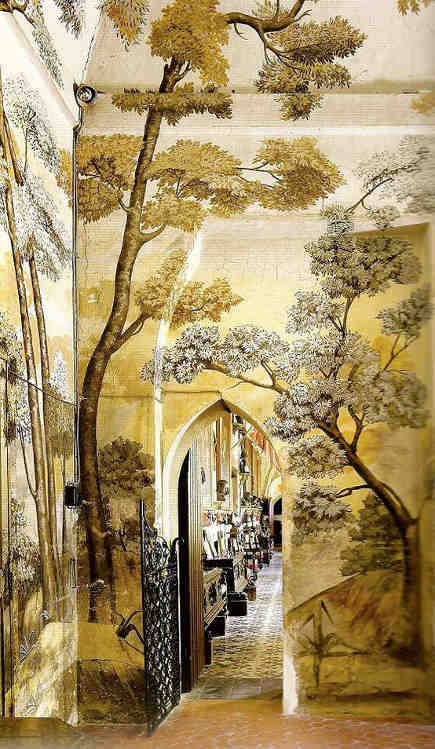 Back when I was an art student I was taught to look for visual clues to help define style. This amazing  entry, with its trees painted right up into the sloped ceiling, had a door in the shape of a Gothic arch, well-worn tile floors and a somewhat primitive electrical set up. So it’s safe to assume it’s an old building that can be appreciated for its thoroughly offbeat look. Additionally, this yellow and gray-black palette is sometimes seen in 18th century faience pottery. If I had to venture a guess to its location I would say Spain or England. Other ideas anyone?

Copy and paste link to quick-share this post:  http://bit.ly/RMU8FN