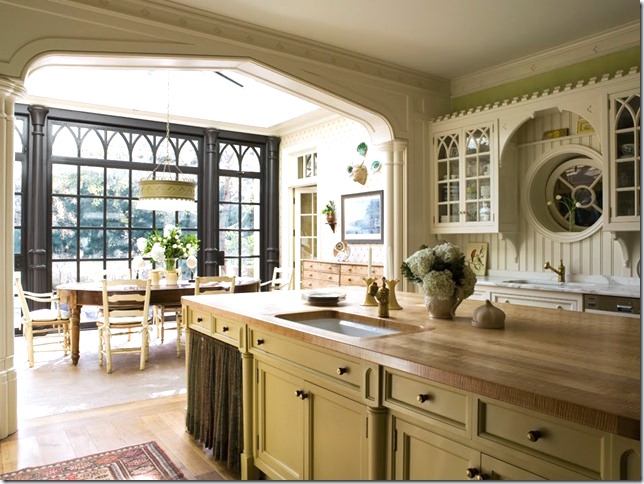 It’s rare to find a Gothic revival kitchen with such a highly defined historic style.

And it’s always a pleasure to see one! The reason? A Gothic revival kitchen is style-specific  (normally the work of an architect, in this case Eric J. Smith) and tends to be memorable because the motifs are coherent, unique and sometimes quirky.  I always favor that kind of individuality. In this kitchen, the architectural features and kitchen cabinetry speak in the visual language of medieval and Tudor buildings. Both were revived in England during the early 19th century and again in the late Victorian era. Key elements include the shallow “Tudor” arch that rises to a center point and divides the kitchen from the dining conservatory.  Pilasters support the arch and are repeated as a theme on the kitchen island as well as on the main conservatory window wall. The sink wall has the most character due to elaborate details on and around the upper cabinets.  Occasionally, we see glass doors with unusual Gothic-arch lites but this is a top example. 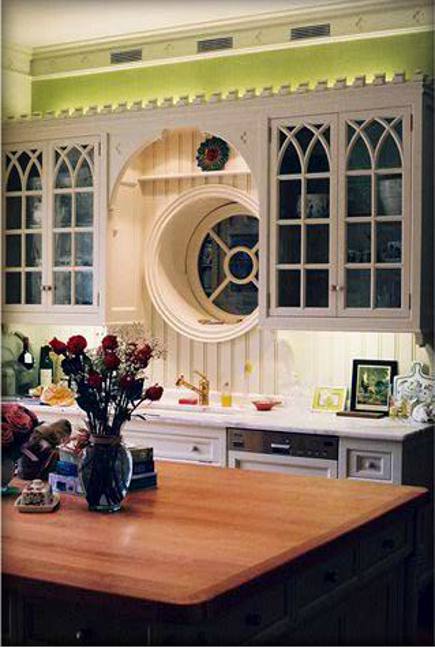 The cabinets create a focal point for the backsplash wall where there is beadboard paneling inset with a highly unusual working circle window — a nod to famed Gothic rose windows which, of course, were far more elaborately divided and inset with colored glass. It’s a charming feature that draws attention to the sink and is framed by an arched molding over it that links the cabinets on either side. As an additional decorative element  there are quatrefoil (four-leaf) motifs worked into the corners of the sink arch and all along the crown molding. Even the frame of the chandelier  over the dining table [bottom] has stamped quatrefoil decoration. One absolutely unique and especially charming feature is the crennellated crown molding on top of the sink cabinets. Made to resemble a battlement on the roof of a medieval castle, it is cleverly backlit. On a practical note, the sink-wall counters are marble, the island has a wood top, a prep sink [above] and abundant storage. 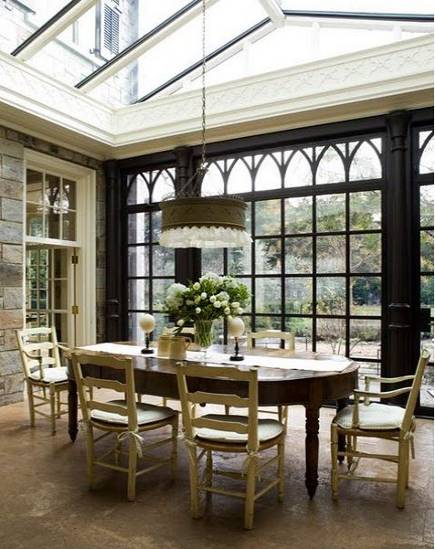 The conservatory end of the kitchen boasts a graceful glass cupola that floods the dining area with natural light, something actual Gothic buildings were known to lack. I like this room so much I also included it in a recent post on Greenhouse Rooms.  Once again, windows on the wall overlooking the garden are defined by Gothic arches and pilasters which supports the kitchen style and a kind of romantic revivalist charm.