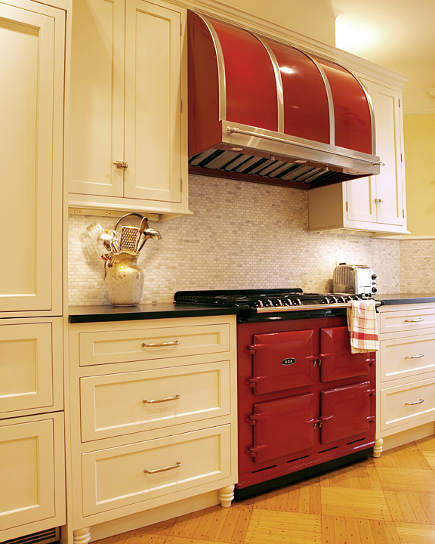 A 1940s kitchen gets a graceful facelift plus a glamorous red Aga range to replace an antique stove.

New York City kitchens often have unique features or situations, particularly in the borough of Brooklyn. There, narrow attached row houses, or brownstones, were constructed for family living during the housing boom of the early 1900s as the city underwent its first great wave of immigration and post-Victorian expansion. Streets adjacent to Brooklyn’s famously huge parks were particularly elegant. So in 1988, when our pal Celeste became the fourth owner of a three-story, 1909 limestone beauty facing Prospect Park, she became the keeper of a historic house. 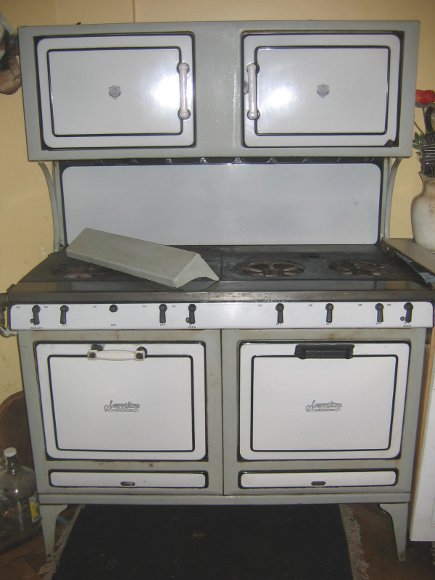 Along with many original details, the kitchen came with a working 1920s “Smoothtop” cast iron and enameled porcelain stove with 6-burners and four ovens (two for baking and two for warming) that Celeste says “could cook like the dickens! At some point, an earlier owner moved the ground-floor service kitchen upstairs to the 14-by 11-foot rear extension on the second (or parlor) floor, where a shallow three-window bay lets in light from the back garden.

But New York City kitchens from the 1940s and ‘50s were unfitted and notoriously cramped, with original plumbing and electrical set ups, miserable layouts and insufficient storage. This was no exception. Yet like many New Yorkers whose working life leaves little time for building projects,  for 20 years Celeste contented herself with removing wallpaper, repainting, and pulling up worn linoleum which had been covering an exquisite, original white-oak-parquet floor. 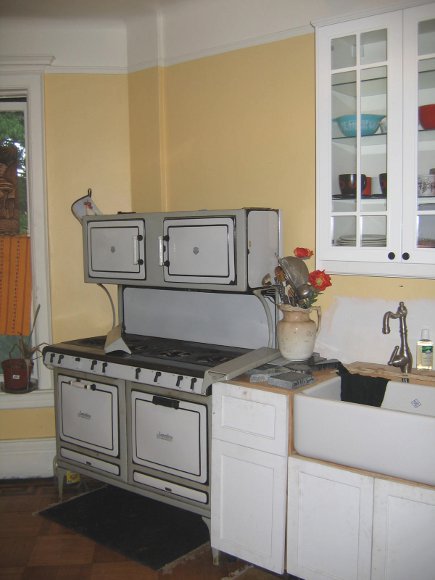 Plans for a modest kitchen upgrade included re-facing the cabinets, refinishing the floor, and removing the peeling laminate counter. But a new base for a 30-inch Shaw’s fireclay farm sink botched by a carpenter she hired, together with a plumbing disaster that permanently damaged the manifold of her beloved stove, led to a full, gut renovation the following year. And finally the “grand old dame” of a range, which had provided nearly 80 years of service, had to be unhooked and retired to the basement. 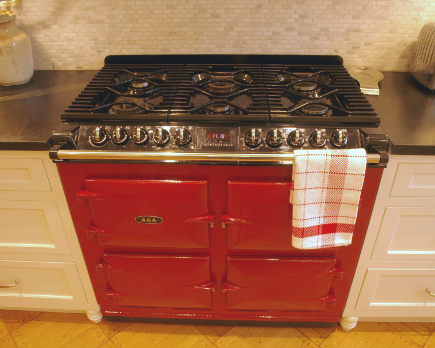 In her place, Celeste chose a claret-red Aga range — a 6-4 with dual fuel. That provided the same six burners and four ovens (broiler-oven, convection oven, regular oven, and warming oven) – the perfect choice in terms of familiar features, a style suited to an updated historic home kitchen, and sufficient panache to replace the antique stove as the kitchen’s focal point. The matching Modernaire hood [top photo] is ideally suited to the range. Inky Green Mountain Original soapstone ties into the black range top and helps create visual consistency on each side of the room. 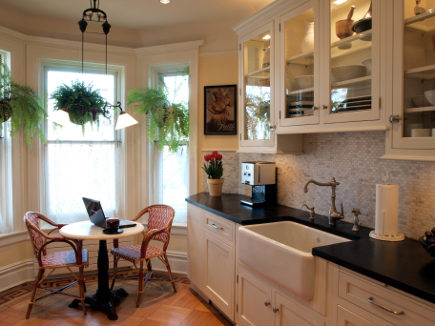 The long, narrow configuration of the space dictated a fitted galley kitchen on the two long walls, with a spacious 68-inch aisle in between. Leaving the center area of the kitchen unobstructed also adds an aura of spaciousness. 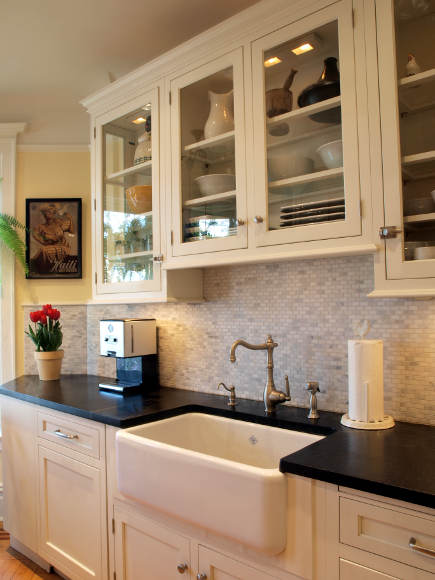 Glass-front cabinets above the sink harken back to the style of grand Victorian kitchens. The small-scale backsplash adds a rich texture and neutral color behind the popular Rohl fireclay sink that helped spark the renovation. The kitchen faucet and soap dispenser are from Graff’s Corsica line. 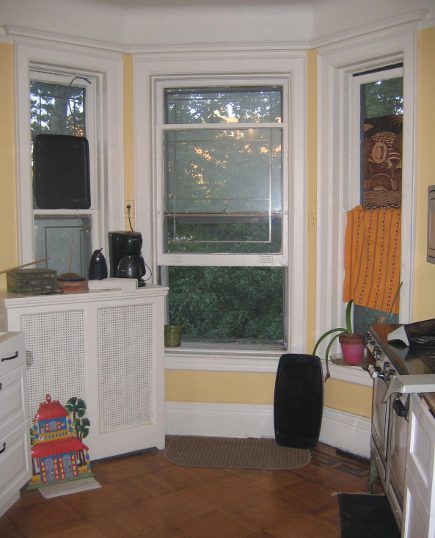 Removing a 40-inch high radiator [above] blocking one of the bay windows created enough space in the bump out for a café table and pair of chairs – a prized eat-in New York kitchen. 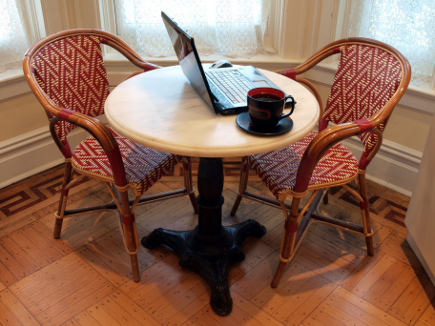 The snug eating area in the bay also helps the kitchen appear wider and conceals the replacement radiator — a Runtal unit attached to the wall below the center window. Celeste found a vintage iron table base and hunted down a round of honed Danby marble for the top. French bistro chairs echo the color of the range. 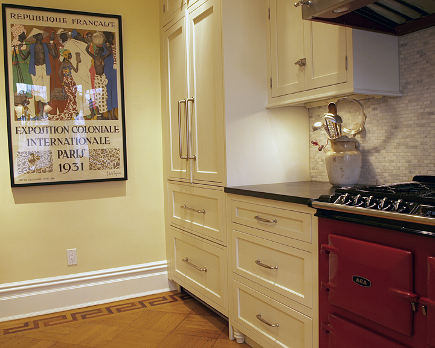 Plain & Fancy Dove White cabinets provided the high quality look this kitchen required along with many refinements. A built-in Liebherr French door refrigerator is concealed behind cabinet panels. The 1931 Art Deco poster adorns the wall that formerly housed the old refrigerator in an unfitted cabinet.

In addition to a Calacatta marble-mosaic backsplash from Urban Archaeology, that might be vintage or modern, this  kitchen has wonderfully coordinated details and accessories we’ve included in the slideshow. (To view photos individually, click on “show thumbnails at the top). 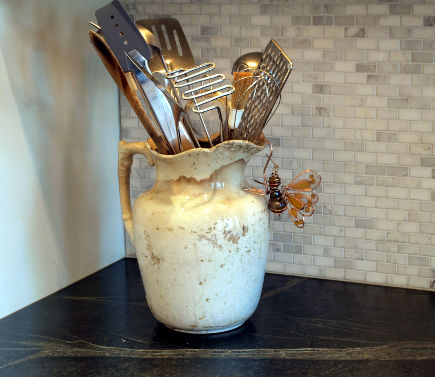 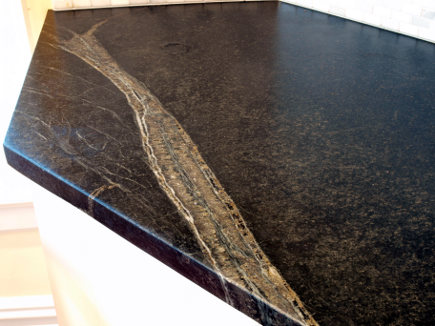 The gemlike soapstone counters have clipped corners on the bay window ends.

A velveteen Norah Wellings doll and wooden black chef figurine are part of the owner's collection of African-American memorabilia.

A narrow passageway leading to the kitchen has an original stained glass skylight panel in the ceiling.