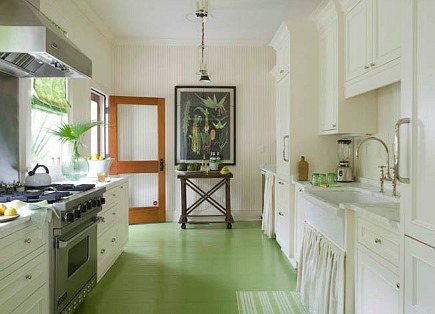 Nothing says updated cottage style quite like a leaf green painted floor.

A recent post, Various Degrees of Green, featured kitchens where green was king. Various verdant shades appeared on cabinets and walls. There even was a pea-green gingham ceiling.  While the ceiling is often referred to as the fifth wall, the floor doesn’t often come into play as a major feature but the green painted floor in this kitchen is an exception. An argument could be made that the floor is actually a sixth wall — which can have a significant impact in any room.

When the new kitchen flooring did not match the old stained floors in a 1915 Victorian cottage,  interior designer Melissa Ervin took charge and decided to paint it. Martin Senour “green leaf,” a saturated color, was chosen to coordinate with the green fabrics used throughout the first floor.   Fabric skirts, a striped rug and roman shades soften the kitchen slightly and keep the cottage atmosphere. And in truth, “green leaf” looks like one of those colors from the early 20th century. That makes it perfect as a background for accessories like the meal rolling cart and the,the vintage German botanical print.  But there can be no doubt that the star of this room is the glossy painted floor.