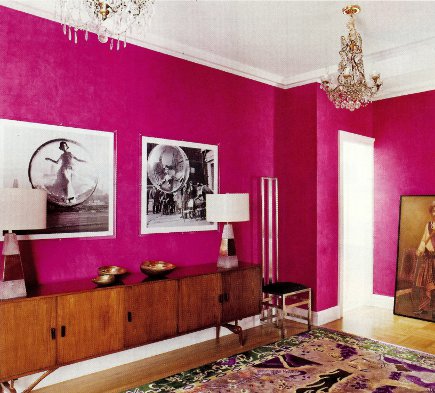 Dubbed Hollywood Cerise and Fandango in the early part of the 20th century, fuchsia is a floral hue.

While the magazines and color gurus are trying to sell us a saccharine hue dubbed Honeysuckle, I’ve been seeing something stronger – fuchsia — pop up as an accent color with black and white, green and gray. We’ve see a lot of it on the web (FFOOFF) and forever in Crayola boxes but not-so-much in home magazines since the psychedelic 1960s. In an apartment [top] for the owner of Stila cosmetics, designer Rafael de Cardenas produced a foyer with unforgettable fuchsia Venetian plaster walls, hung with black and white fashion photographs. 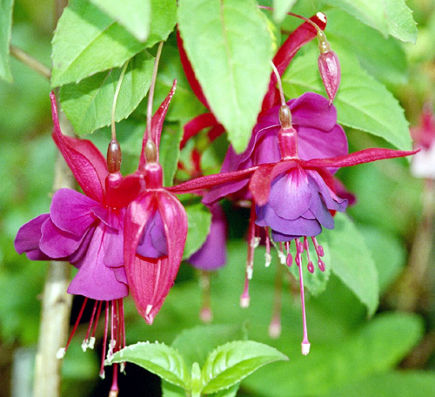 Most people have seen fuchsia blossoms. But you know, before I checked, I couldn’t exactly recall which flower it was — and I really love the color. It’s amusing that the same apartment by de Cardenas has a kitchen with cabinets more or less the color of the plant’s leaves. 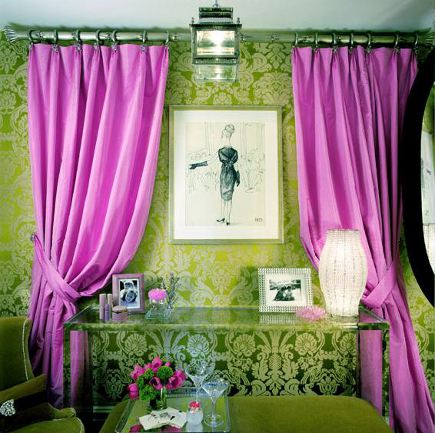 Acid green has been having quite a run this past so it should be expected to see fuchsia turn up. They are opposites that attract, as one of our favorite rooms by Amanda Nisbet proves. 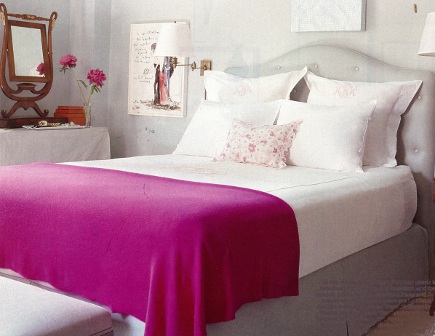 The daughter of L.A. decorator Suzanne Rheinstein used a fuchsia throw in an otherwise serene bedroom with walls painted in Farrow & Ball Teresa’s Green (which looks gray here). That same color was used in a painted on headboard by the  brand’s color consultant. 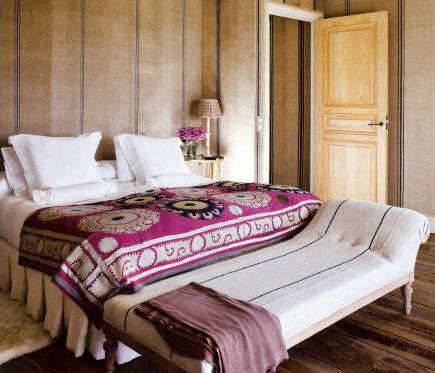 An antique Uzbek suzani with an unusual fuchsia ground (suzanis are often orange) has a primitive design that also uses light gray and touches of blue-black. The bold bed covering  also adds life to an otherwise snoozy bedroom in Spain.

Copy and Paste the Link to Quick-Share this Post: http://bit.ly/HEaZUl