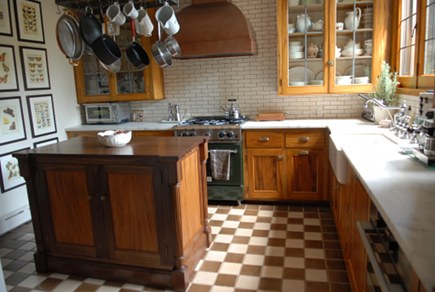 A 1927 gumwood cabinet kitchen has been artfully updated while preserving the original aesthetic.

In a beautiful upstate New York Tudor Revival sat a tired, cramped and dark kitchen. The room had “good bones” but the original layout had inadequate storage and tight work spaces. Gumwood was commonly used in the early 20th century and this kitchen had vividly patterned gumwood cabinets as well as leaded glass casement windows. But over the years much of the gumwood trim had been painted or removed. Luckily, this grand dame has been lovingly cared for by only two families, with the current caretakers being Deborah and Don. 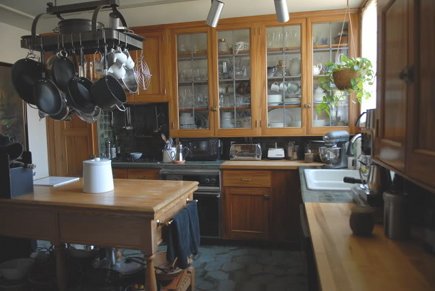 Deborah purchased the home from the estate of the original owners. While she wanted a lighter and brighter space with more room to move and improved functionality, they both wanted a new kitchen that looked original and felt compelled to listen to the house.  The only facelift the room had seen from the first owners was minor — 1950’s red Formica counters. At the time of the renovation the existing kitchen had   green-blue tile and butcher block from the late 1970’s. There was deteriorating grout, old appliances and cluttered counters that created visual chaos. 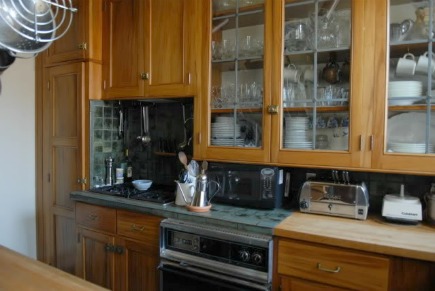 Making things even worse, four glass-front cabinets were grouped together on the right side of the range wall and those hovered less than twelve inches above the counter. On the opposite end, floor to ceiling cabinets left very little elbow room in the cooking alcove. Being an experienced woodworker, Don devised a plan to take the old cabinets apart, reuse the doors and drawer fronts, but build new cabinet boxes with face frames.  He was able to augment gumwood from the salvaged doors and purchase new wood from a local lumber yard. He also did all of the plumbing and electrical work required for the project. 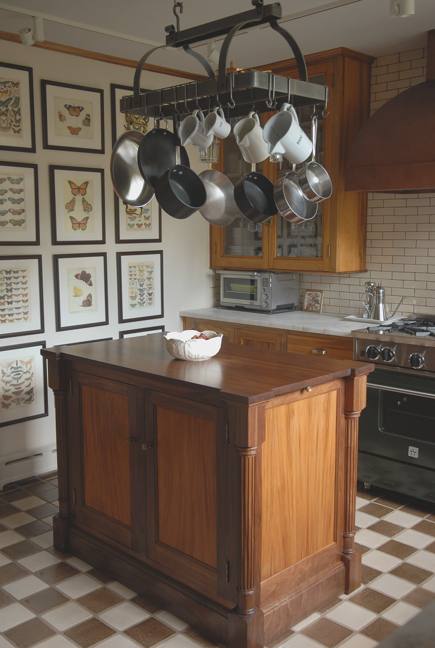 Deborah and Don designed the gumwood and walnut island to look like a piece of furniture, with a liquor cabinet behind closed doors on this side and drawers on the other. The walnut on the island nods to walnut-stained gumwood trim in the formal rooms of the house. Natural trim and baseboard were added in the kitchen to repeat the trim found in the private areas. The original Enclumé pot rack was important for storage. After Deborah fell in love with the butterfly prints in a Cavallini calendar, Don built her frames from stock molding which she antiqued to create a beautiful wall of art in the kitchen. 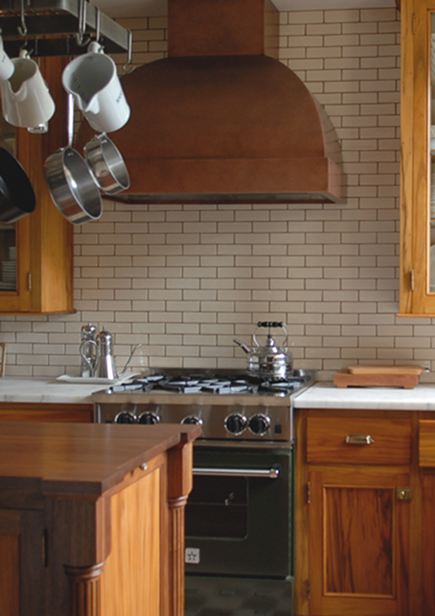 The center of the main wall is now home to a bottle-green Blue Star range and custom copper hood with a Prestige blower. Having always hated the insufficiency of the old downdraft, Deborah wanted a powerful hood this time around. She splurged on a chrome Simplex tea kettle purchased on eBay — previously made in England by Newey and Bloomer Ltd.. The kettles are no longer in production.

Deborah searched for materials with a handmade feeling that also were age appropriate to the 1920s. From Vermont Marble Quarry, she chose honed Eureka Danby for the counters.  It’s a very dense white marble with brown and grey veining. The backsplash is Walker Zanger Gramercy Park in Bone China with Summer Wheat grout. Seneca Select hand-molded 6×6 tiles in Espresso and Cappuccino were chosen for the flooring. The tiles are made in Ohio and fired in original 19th-century beehive kilns. Deborah always hated the fact that shelves in her glass-door cabinets didn’t line up with the zinc leading strips so when Don rebuilt the interiors of the uppers he made sure to line them up perfectly. 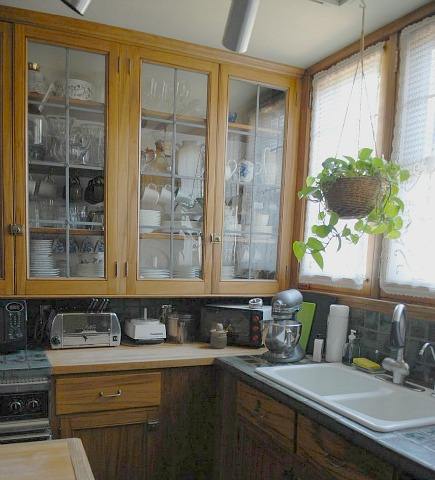 This before picture shows the tight quarters and minimal counter space that needed correction.  Don built old-style wood frame storm windows to replace the aluminum track windows over the leaded glass casements.  This allowed more light into the room and gave Deborah permission to take down the curtains that had been used to hide the metal frames. 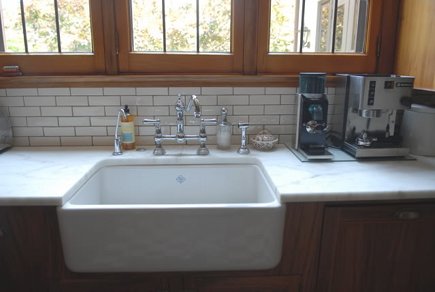 Beneath the casements is a Rohl Shaws single-bowl fireclay apron sink paired with a Perrin & Rowe chrome bridge faucet.  A Rancilio espresso maker and grinder are permanent residents on the counter.  To the right of the sink is a Miele dishwasher with a panel Don made from an old door.  A Miele speed oven sits next to the dishwasher (the handle can be seen in the first photo). 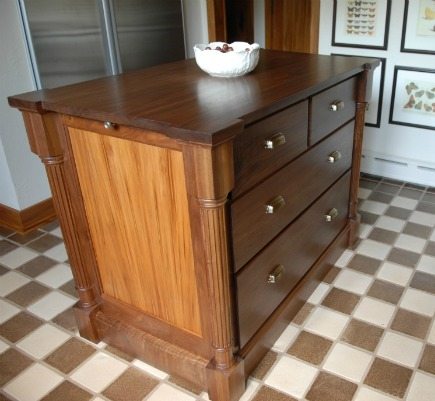 Antique brass Gilmore cup pulls from Restoration Hardware were used on the working side of the island and on the perimeter drawers and pull-outs. All the lower cabinets have pull-outs, so storage feels like it has more than doubled. A glimpse of the original Kitchenaid built-in refrigerator is seen here.  It was given new stainless steel skins from Metals By The Inch. Next on Don’s list is to make a gumwood cover for the radiator. 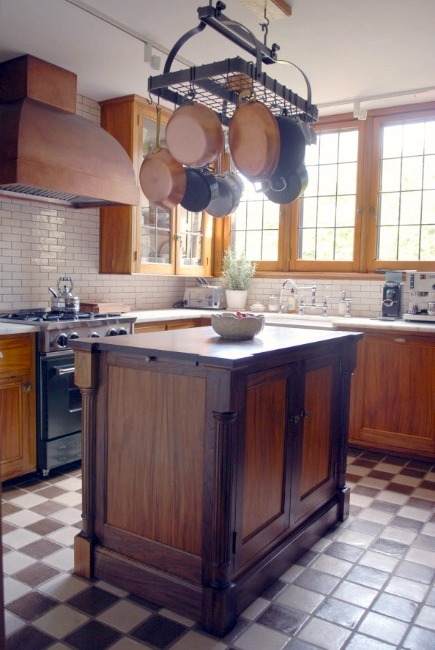 Antique brass latches and butt hinges from the original cabinets were reused. Don switched out the big Lightolier track cans for halogen bullets. Deborah says the new kitchen feels so much brighter and open, plus it’s easier to move around and work in, as well as access cookware and tools.  She is thrilled to have all the counter space, especially on either side of the range.

The project took well over a year, and though there were problems along the way, Deborah said it was great to design and work together.  They were fortunate to have the original gumwood cabinet look to point the way, time to do all the work, and Don’s talent to give back to their Tudor Revival home. 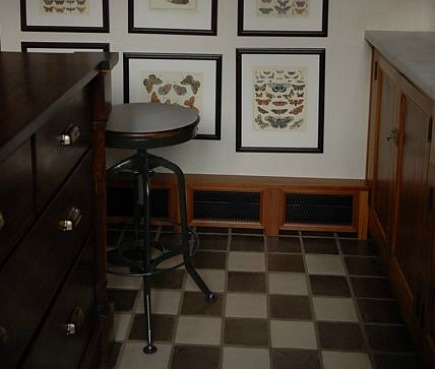 Copy and Paste the Link to Quick-Share this Post: http://bit.ly/Iv9ig8