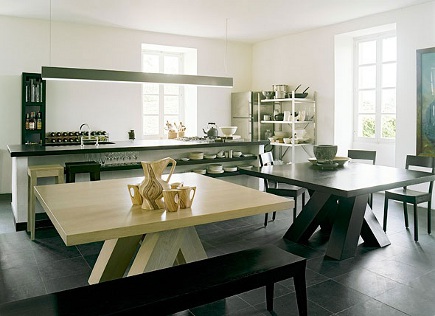 A dreamy modern kitchen — black and white, unfitted — also has two tables for dining + a fireplace.

Let’s talk understated luxury — meaning simple surfaces beautifully used in a kitchen with two tables as a dining option. Few designers do that better than Kate Hume. Based in Amsterdam, Hume uses her own line of modern furniture inspired by the mid-century French style of Adnet and the epic Jean-Michel Frank — creator of the Parson’s table. Who needs great design in the kitchen? I do and I always will. There are too many over-the-top, overstuffed examples out there.

A remodeled kitchen in a 17th century manor house in Southwest France, is anything but overstuffed. Clean décor takes advantage of the large casement windows, great light and those plaster walls I adore. In European kitchens the work triangle is trumped by the “bench” concept where the sink and cooktop are placed on opposing ends of an island with working space in between. The huge, canopy-like light fixture, suspended over the full length of the island, solves many lighting issues in rooms with high ceilings. More practical and less cluttered looking than pendants the fixture also makes a strong design statement, echoing the zero-radius modernism.

A pair of Heijden Hume Metro dining tables in dark and light finishes reinforce the black-and-white color scheme along with the designer’s signature Amsterdam chairs, Harry barstools and Dick bench. Rather than opt for elaborate built in cabinets the freestanding Liebherr 30-inch refrigerator is simply placed in a corner where it functions quite well unfitted, due to a zero-clearance door. Pot, pan and dishware storage is relegated to open shelving along the perimeter walls and on the dining-side of the island. 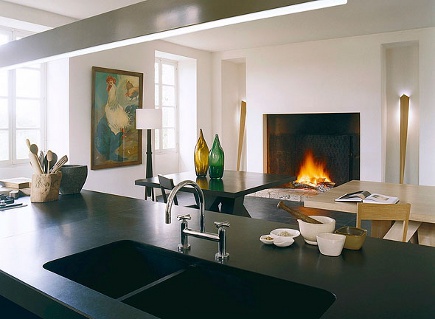 Standing at the sink, equipped with Dornbracht’s Tara bridge faucet with cross handles, it’s clear that the kitchen has been integrated into a broader living space centered around the fireplace. That too, hews to the high-contrast color scheme — except for the large poster of a big rooster – what else would be expected in a French kitchen, even one as esthetically grounded as this?

Copy and Paste the Link to Quick-Share this Post: http://bit.ly/IFIKFA