You are here: Home / Houses / Our Houses / Home Without Power 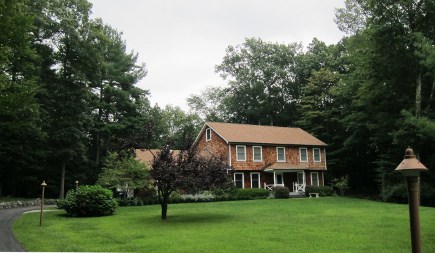 When a major power outage struck, my checklist for emergency conditions helped me weather two storms.

Update, Oct. 31, 2012 – Hurricane Sandy: The power went out on Monday, October 29, at  8:30 p.m., following high winds. While our generator was working, and provided basics, there was no phone or internet. Tuesday morning, I got up and looked around the property but saw little damage. I’ve learned to always walk down our driveway and see what is happening on the road as well. There, I found the downed power line — one that had fallen across our driveway and basically trapped us in our house. 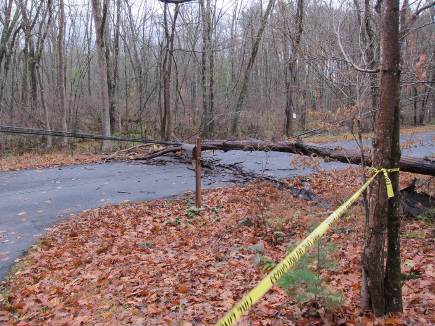 For safety, the power company had taped off our driveway. We were stuck for 24 hours. Then early this morning I caught a glimpse of a repair crew that had come in from Iowa to help out. Within an hour, the high voltage wires were back in their place, the danger was  gone and power restored. 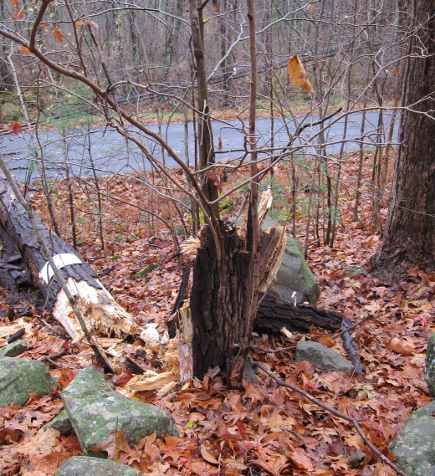 An ancient oak tree, about 1-foot in diameter at the base, had been brought down by high winds from Hurricane Sandy. 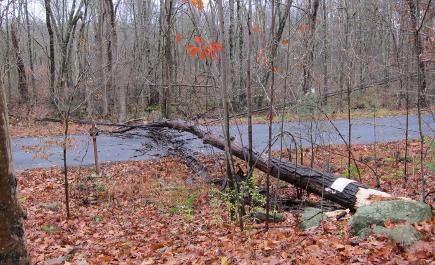 The wind blew so hard from the east, the oak landed like a compass pointing due west. The crew cut up the tree and left it on the road.  Fortunately, nothing was damaged around the house but I had already upgraded my insurance.

The checklist I developed last year worked really well for me again,  However, after Irene I purchased four 5-gallon kerosene cans, which I filled with water ahead of the storm — just in case. I also filled 2-litre soda bottles waiting for recycling with filtered drinking water. My 6-quart dough-rising container can serve as a sink, if necessary. Our generator’s been repaired and the twin trees (in the photo below) have been taken down.  I had cooked ahead — carrot soup, roast chicken, and pasta with broccoli — with things that can be easily heated in the microwave. In case we have a prolonged power outage there is plenty of peanut butter, bread and jelly. My fingers are crossed but the high wind advisory lasts more than 24 hours.

September 2011 – Hurricane Irene – That old witch visited millions of us on the East Coast but, of course, we knew she was coming. For a couple of life-long apartment dwellers, this was an initiation to country life a mere two months after the move. So I dutifully scanned the be-prepared lists online, stocked up on batteries and picked up a small transistor radio. I almost didn’t buy the radio figuring it would sit in a drawer unused like our old tape recorders, film cameras and jogging headsets until it became obsolete and had to be schlepped to the dump. Our house has a backup generator which saved us a few years ago when the main electrical line ruptured. The genny was serviced in July and the battery replaced. Still, I was anxious. 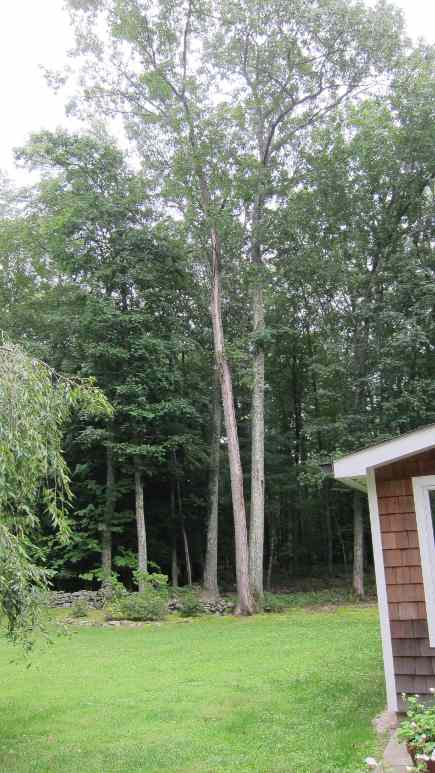 The ancient trees on our property were my main concern. Some are 80-feet tall and several too close to the house for comfort with the storm heading straight up the Hudson River, effectively, into our backyard.

Here’s a checklist of what I had on hand in preparation:

I didn’t do a ‘go bag” since the storm was scheduled to arrive sometime on Saturday night and be over by Sunday evening. The closest town has only a few motels, which surely would be booked.

By Sunday morning we were on backup power but without TV, internet or landline phones. Yay genny! By the time the storm intensified in the early afternoon cell service was out, too. Our sole source of information was that little transistor radio but only the FM band worked. 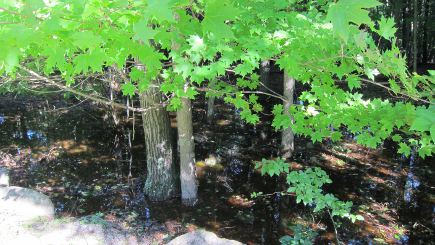 Late on Sunday afternoon, the storm let up. We headed outside for an inspection tour and found two lakes created in the woods on both sides of the house – though well below our lawn level and nowhere the basement windows. 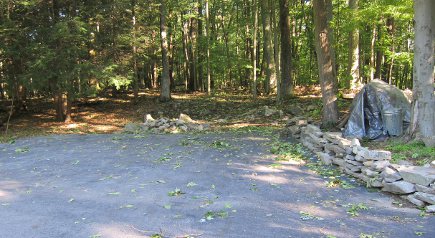 We quickly realized how fortunate we were to have no downed trees, though plenty of branches and leaves were scattered everywhere.

Early Monday morning I headed into town in search of a cell-phone signal. After two hours in the Dunkin Donuts parking lot, I had answered all the concerned phone calls, returned emails and made contact with the bank about our mortgage refinancing, tentatively scheduled later that day. By the time I got back home, the cell service had been restored and the radio (FM is not the place to find emergency news) revealed that our county had been hard hit. I figured full power might be 24 to 48 hours away. 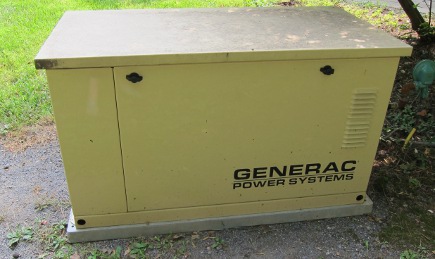 Tuesday morning at 5:45 we were awakened by beeping from the iMac backup battery.  When that beeps, there’s real trouble. Jumping into my jeans, I raced outside to find the  generator still hot, but not running. I turned it off and switched it back on. It started, sputtered and died. Unable to reach the repairs guys by phone, I decided to head over to their office, nearby. I was able to manually open the garage door but had to roust Mr. AM to hold it up so I could get the car out. But flooded roads along the nearby river left me unable to reach the generator repair office just 2 miles away. I set up outdoor potty facilities (don’t ask) and kept calling. Somehow, I managed to throw the freezer paks and the important cooked food into the insulated food carriers since now all the power and the water was gone.

Meanwhile, the bank’s attorney was set to arrive to close on the new mortgage that afternoon. He ran late and got lost. By 6 in the evening, I realized there wasn’t enough water on hand to get us through the night and was lucky to find a motel room in town, where power had returned.

I threw my go-bag together  quickly, grabbed the food coolers, dropped frozen shrimp and chicken breasts off at the neighbors, and made it to the motel in time for Mr. AM to see the start of the Yankees-Red Sox game. (It’s good to know what’s really important when the power goes out). Wednesday morning the electricity was back, along with TV and the internet. Telephones followed, which made us feel very blessed when we turned on the tube to see saw people losing their homes to floodwaters in neighboring states.

So here’s what I learned:  I needed every single thing on the “be prepared” list and more. The next day I purchased two brand new 5-gallon gasoline cans which I hope to never fill with water for emergency use. But if necessary, I’m all set.  Meanwhile, genny may be dead, which means a huge unforeseen expense to replace her. It’s a must-do. The first snowstorm, and next probable power outage, is only a few months away.

Copy and Paste the Link to Quick-Share this Post: http://bit.ly/xxs8xg