You are here: Home / Houses / Outside / Gardens Most Amazing 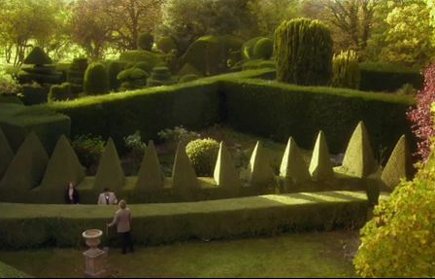 A topiary garden of heartstopping beauty was shown in an episode of Agatha Christie’s Hallowe’en Party.

The great Belgian detective, Hercule Poirot, traveled to the English countryside to investigate a murder. The gardener turned out to have done it – which gave us a glimpse of the monumental topiary garden composed of sculpted yews [top] at Beckley Park, a private estate in England. Organized around walls of huge neatly-clipped hedges, there are giant topiaries in the form of pyramids. This topiary garden was created in the 1920s and is a form of living sculpture. Hedges divide it into areas akin to outdoor rooms. I am paraphrasing Poirot when I call it “a garden most amazing” but I find topiary gardens to truly be amazing. It is not the only one. 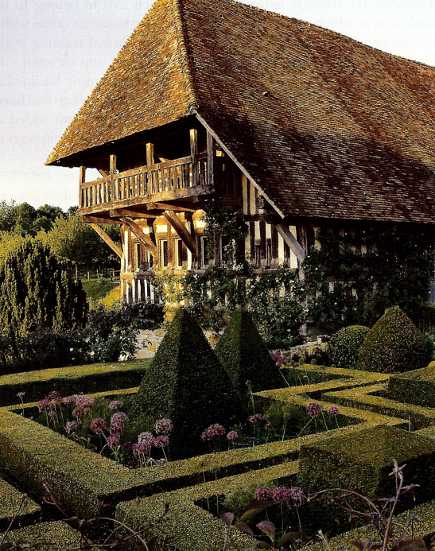 I quickly realized that I had seen a series of similar geometric gardens, mainly on the pages of English House & Garden. The first which came to mind is this 16th century Normandy Manor house, restored in 1973 and now a French historic building. The garden is the work of the late English landscape designer Russell Page who placed pyramid and square topiaries in the center of boxwood parterres – low, symmetrical shaped hedges trained into in geometric shapes. 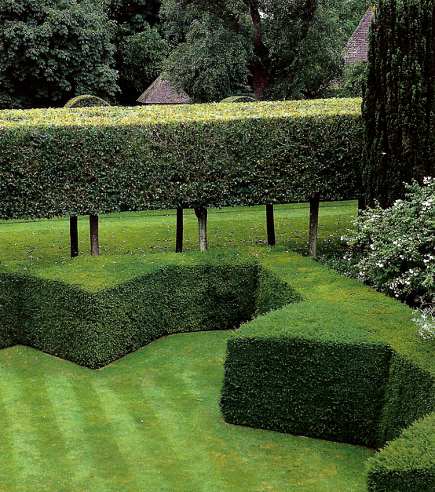 The zig-zag hedge in one section of the garden is set against a double row of squared-off trees. The artfulness required to create these forms (not to mention the skilled maintenance) is principally found on the grounds of stately homes in England and France where the aesthetic of landscape architecture is well understood. However, an ambitious gardening enthusiast might well take up the style, shaping a spectacular garden as his or her DIY know-how progresses. 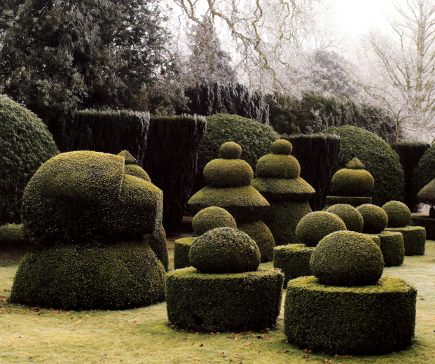 English decorator Nancy Lancaster (of Colefax & Fowler fame) purchased Haseley Court in 1954. A feature of that 80-acre property was a late 19th century sunken garden  centering on a topiary chess set. Fortunately, a local man kept it up during World War II. The current owners have maintained the garden in its original form (including 4 outdoor rooms) since 1982. 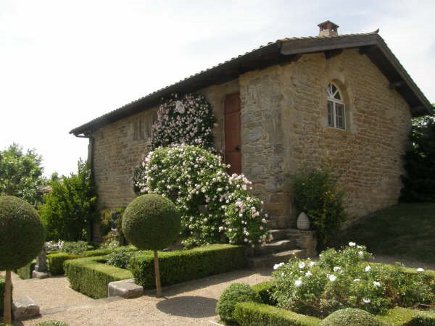 On a simpler note is this French provincial garden composed of parterre boxes around white roses. Globe-shape myrtle trees flank a walkway.

Apart from the general style and dramatic scale of architectural gardens, the attribute I find especially appealing is the lack of multiple colors. Generally, these are green-on-green affairs which sometimes include a color such as white or lavender. The added bonus is cold climates is a garden that remains somewhat the same throughout the year and, in some cases, even defies the weather.