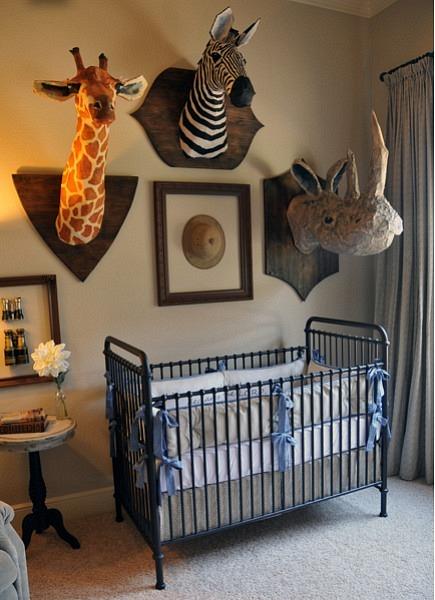 A safari theme baby’s room by a DIY mom is designed for growth and exploration.

We’re having a baby boom at Atticmag, and our first new mom-to-be is Brandy O. You may remember her guest post Rugs in Morocco.  I’ve known her long enough to believe there is nothing she cannot do. Expecting her first child in July, Brandy began a safari theme nursery by painting the walls of the baby’s room with Sherwin Williams Pavilion Beige. She used, SW Irish Cream for the trim and ordered a hand-forged Millbrook crib from Restoration Hardware. Having  decided on an African safari for the nursery (no overload of animals), she went to work creating three papier-mâché trophies. 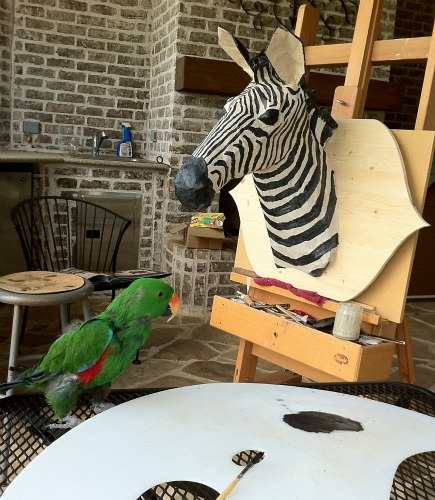 Brandy worked outside on the patio with a little help from her Eclectus parrot.  Titus is an excellent talker, he even mimics Brandy answering the phone.  He’s also a handful, and broke into a tube of paint when she wasn’t looking. “My plan was to make three papier-mâché trophy heads that would hang on the wall — a rhino, a giraffe, and a zebra — sort of like Anthropologie’s set but much larger,” she explained.  After a huge learning curve, she had made the rhino but it was 4-feet coming off the wall and heavier than she intended. An hour of plotting in a big box store — buying lumber, hardware, and brackets — she then cut 10″ from his neck, mounted him onto a board and screwed it to the wall so that it’s safe.  The giraffe is adorable with its long lashes but, as a horse lover, the zebra is my favorite. 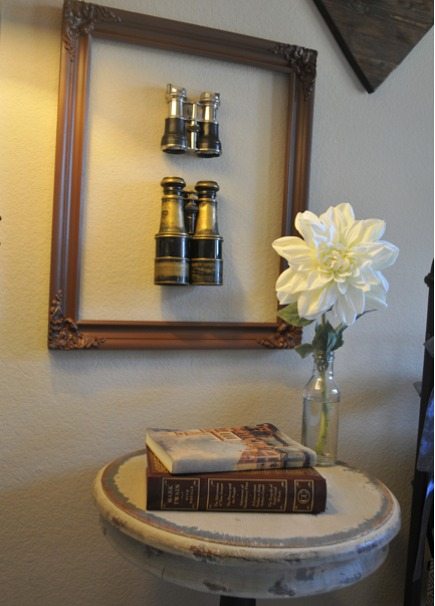 A pair of vintage opera glasses from her mother’s California shop, The Green Pea Boutique, replicate binoculars.  The pith helmet (shown in the first photo) was found in a childhood neighbor’s barn.  These items were “framed” with vintage wooden picture frames. 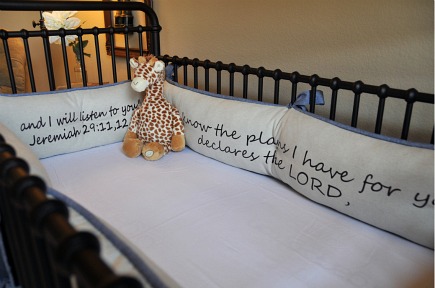 Before sewing the crib bumper, a favorite Bible verse was added to the fabric in vinyl lettering by a local digital designer.  Blue fabric used for the ties and cording was repeated inside the inverted pleats of the crib skirt. 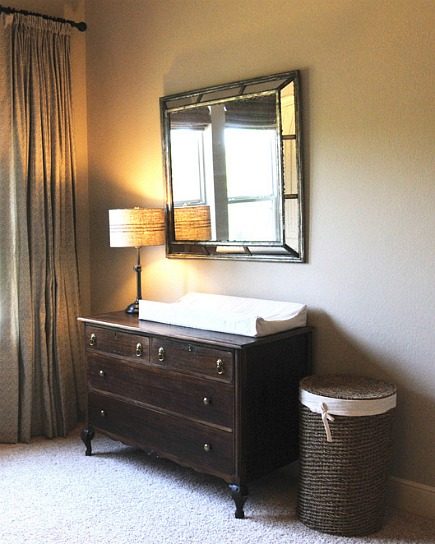 Brandy selected a greige geometric fabric for the nursery’s French-pleat curtains.  Generously sized at two and a half times the window width, they were allowed to hang from the hand-forged iron drapery rod for a few days before hemming by hand.  The fabric was also used for the flat-paneled crib skirt.  Pottery Barn’s Chelsea series lamps were topped with French stripe drum shades — a textured linen/hemp resembling European grain sacks.  A vintage dresser found at a local antique store became a changing table with the addition of the contoured pad. 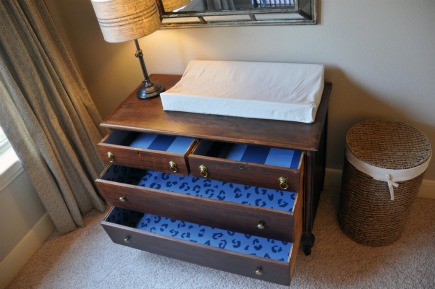 What I first thought was fabric turned out to be painted blue stripes and cheetah spots.  It’s a fun reveal when the drawers are opened.  The lined wicker hamper is a convenient, yet stylish, solution for laundry.

For bonding moments (otherwise known as sleepless nights), Brandy chose a tufted Amity rocker recliner in custom gray fabric. She found the La-Z-Boy most comfortable and practical.  The chair can be used elsewhere once the baby becomes a toddler.

Congratulations to Mr and Mrs O on the upcoming birth of Baby B, and to Brandy for creating an amazing, one-of-a-kind nursery that will grow with their son while providing hours of imagination.

See the Eclectic Gender-Neutral Nursery for another baby room.