You are here: Home / Kitchens / Yellow Kitchen / Mother of All English Kitchens 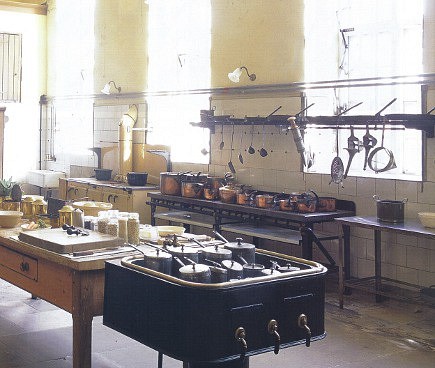 Back in 1834, a grand picnic for 6000 was prepared in Petworth House’s English kitchens.

Those tantalizing glimpses of English kitchens we see in the new Upstairs-Downstairs rarely offer time to study the differences between contemporary kitchens and how they different from older examples that lacked all our how our elaborately fitted kitchen cabinets with pull outs and knife drawers. One of the great English kitchens is preserved at Petworth House, part of Britain’s historic trust since 1947. Beginning in the early 19th century it was located well behind the main house in a 1100-foot-long stone building, which also included servants quarters and the complex of offices necessary for the administration of the 100,000 acre estate belonging to the Earl of Egremont. Famed for its food, Petworth supported an enormous staff whose numbers contributed to  the reputed 30,000 yearly meals cooked here during the early 19th century.

The main room boasted a high ceiling and huge windows. Originally, walls were plastered, with tile and electric lighting arriving around 1900 and the Aga-style cooker likely later. Food preparation took place at the central table – the precursor to our  kitchen islands. Sauces and hot liquids were held in pots set into a large black cast-iron hot water bath for transport to one of three dining rooms in the main house. Along the exterior wall, plumbing to the small fireclay sink (far left) left pipes exposed above an iron utensil rack. A close look at the steel table adjacent to the yellow cooker reveals a grated top  – indicating that it was a destination for hot pots while hot lids or shallow baking dishes could be set on the stone-lined shelf below. A thick rail running along the front of the table helped keep cooks safe from the heat. 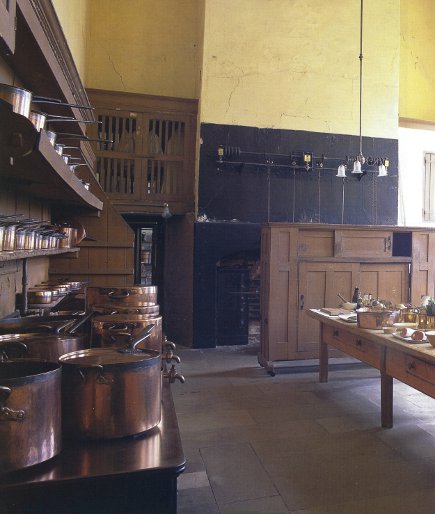 One end of the kitchen housed the large roasting hearth, unfortunately obscured by a portable cupboard where meats were placed to rest after cooking. The preparation table extended nearly the length of the kitchen. Across the aisle is a cast iron flat-top cooker. Shelves above it hold various copper stockpots and saucepans, arranged carefully in descending order of size. Over a doorway in back is a high, two-sided slatted  cupboard for curing meats. While stone walls were plastered and colored, the fireproof stone floor was left in its natural state. 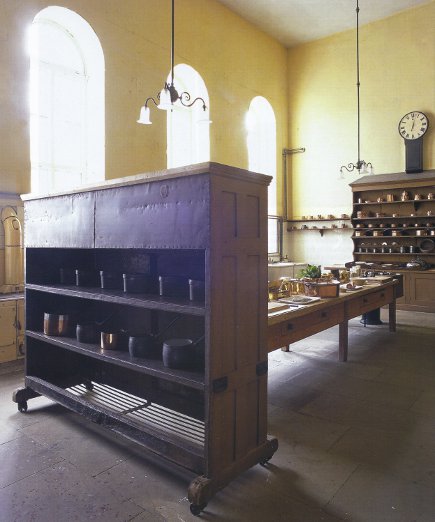 The roast-resting cabinet, known as  a “hastener,” also acted as a heat shield. An English dial clock was mounted high over a dresser which would likely have been filled with crockery while the kitchen was in use. A pair of sinks discreetly occupy the far corner. 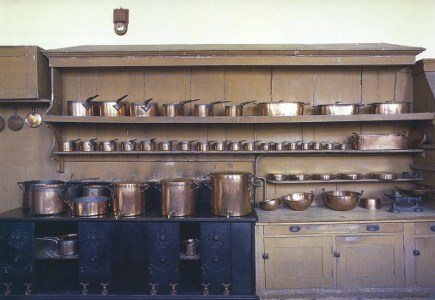 Adjacent to the flat-top is one of the few closed cupboards in the kitchen. Note the length of the drawer spanning two base cabinet doors — which all open in a single direction.  Here is where the stocks, sauces and soups were prepared and fish would have been poached. Copper cookware arrayed according to size and type had a hutch of its own, with saucepans and braisers on top, and smaller saucepans and a fish poacher on the second long shelf. Flat, reversible covered molds used for baked dishes occupy a shelf of their own above unlined copper beating bowls. 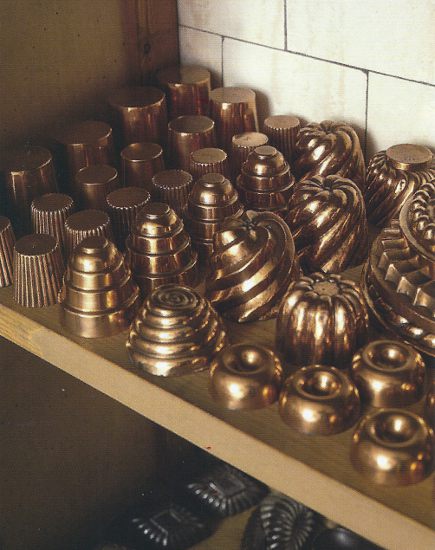 During the late 19th and early 20th centuries all manner of elaborately molded puddings, aspics and baked goods were in vogue. Tin-lined cooper molds became highly specialized, from plain and fluted darioles (far left) used for savory mousses, to the elaborately tiered and swirled molds sometimes used for for sweets. Donut-shaped savarin molds were a typical shape for dense cakes soaked in rum-flavored syrup. 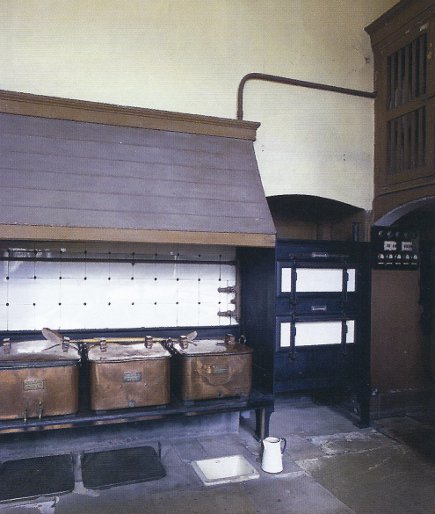 A trio of steam kettles are protected by a primitive hood that no doubt helped trap the heat. During the 1920s, the freestanding black-and-white Benham ovens were added. 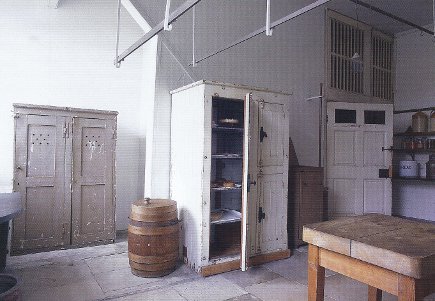 The main kitchen opens into a “cool room” where the white wood cupboard, an early refrigerator, offered food storage on one side with hatch doors for blocks of ice from the underground ice house on the other. This room also was used for preparing and hanging the hams and slabs of bacon that hung behind the ventilation slats above the door, while rails were used for hanging other salted meats. The cocoa-colored wood pantry cupboard,  boasts pierced doors to allow for air circulation – a motif still used by some custom English kitchen cabinetmakers today. 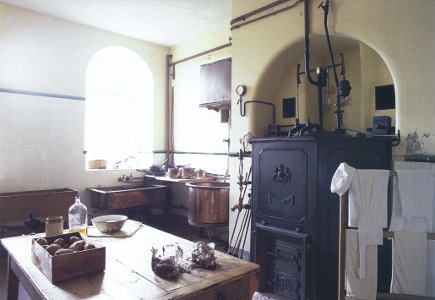 This scullery is fitted out with a cast-iron steam boiler and unlined copper tub sinks large and deep enough to clean large pans, in addition to the essential central table. A drying rack took advantage of the boiler’s heat. Both well and river water were routed to the scullery. 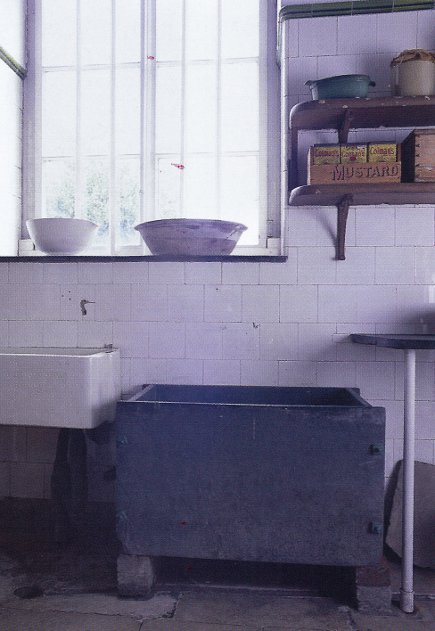 A  curing room utilized a fireclay sink and a slate tub, set on pavers, for brining meats. The window was netted to keep out flies. 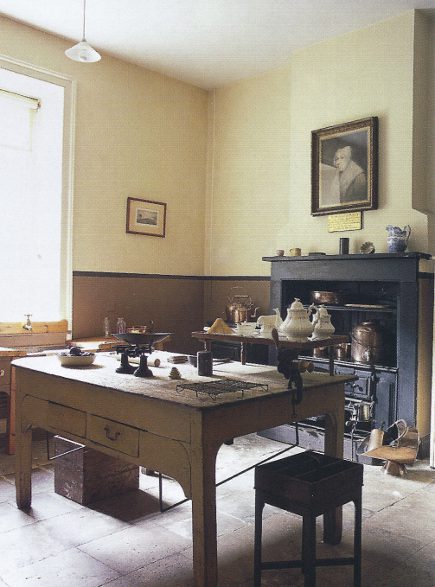 Canning aficionados will appreciate this “still room,” the central assembly point for tea trays as well as the place where fruits and jams from the estate harvest were juiced and preserved. The single-spigot sink (below the window) is uniquely fitted with a table on each side. Above the coal-fired hearth, where boiling water for tea was kept at the ready, is a portrait of Mrs. Purser, the legendary housekeeper who ran things  at Petworth until 1814.