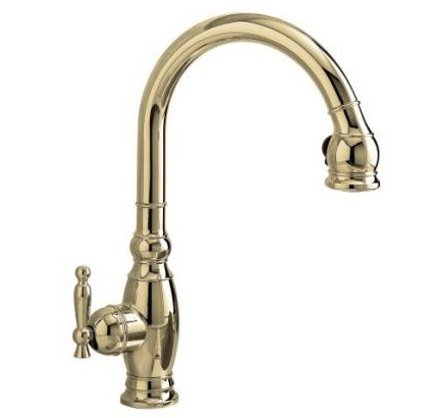 Two year-long surveys asking respondents to name the top kitchen faucets purchased for their home renovations ranked the imposing Kohler’s Vinnata pull-down (about $600) as #1. The pull-down style also is trending as the current top choice.  Kohler also was the brand most frequently purchased by respondents in both polls, followed by the Grohe Ladylux collection of four different styles. And overall, results proved that price does matter to buyers.

While one Vinnata owner said “the kids had a blast playing with the spray on/off!” fun wasn’t the driving factor in its selection. “The [faucet] is so much easier to use then my previous pullout, which was awkward and a leaky mess,” an owner commented, adding that “we did the front handle installation after trying it on the right for a week.” Flexibility counts. Another purchaser “wanted something a bit more traditional looking,” which aptly describes this 16-5/8-inch-high workhorse.

In addition to the Vinnata the two surveys put Grohe’s Ladylux Plus pull-out (left, about $350-$425)  and Kohler’s Simplice pull-down (right, about $300) in the top three overall.

However, the Ladylux Plus — #1 in 2005-6 — was absent five years later when the Simplice came in first. Meanwhile, Kohler’s Vinnata retained the #2 rank throughout — the only faucet to sustain high-ranking popularity over time despite a steeper price point.

Some 54 different kitchen faucet brands and styles were named in 176 responses in the pair of informal surveys published between 2005-2006 and again 2010-2011 on Garden Web, a major online source for real-life information, experience and opinion on redoing kitchens.  In the interest of full disclosure, Allison and I were both respondents in those surveys and I originated the second, 2010-11 query. The raw data, tallied here for the first time, forms the basis for the rankings and conclusions about trends. Faucet features, current prices and other information is based on our own original research.

The Pull-Down Outpaces the Pull- Out
A pull-down faucet [left] is generally 12-inches high or taller and has a concealed flexible tube attached to a mobile head that gives the user extended reach inside and outside the sink – allowing a vase, pot or glass nearby be easily filled. Faucet heads come with and without a spray switch, offering all-in-one convenience and a flexible working area between the faucet head and the sink rim. A counterweight on the hose helps the head retract and stay put. A pull-out faucet [right] has the same general features but the head tends to be larger and heavier and draw outward as opposed to a vertical tug downward.

Top Faucets and Trends in 2005-06
The first survey, with 96 responses, cited 28 different brands. Following the Ladylux Plus and Vinnata was a tie for third between budget-price pull-outs: Kohler’s Forte (left, about $225) and Price Pfister’s Marielle (right, about $200). “I didn’t want the faucet to be the focal point of the new kitchen so I looked for something low and small. This Price Pfister worked,” one owner stated.  Single lever faucets and pull-outs dominated three of four in the top tier. 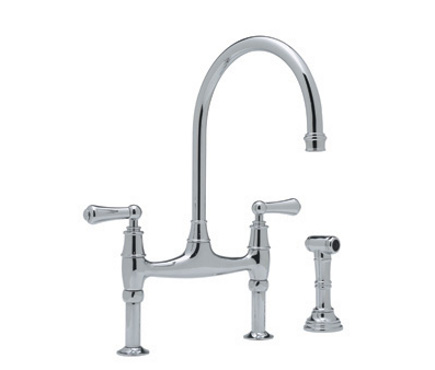 The Perrin & Rowe bridge faucet (about $800-$1000), with separate hot and cold water controls and an optional side sprayer, was notable in the dual-control category in the first survey and remained equally popular in the second tally. 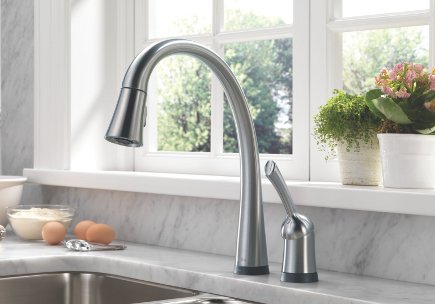 The News in 2010-11
The second survey of top kitchen faucets cited 26 brands via 80 responses. Kohler’s Simplice, a budget-loving pull-down (in the second photo from the top) took the #1 slot. A six-way tie followed! That gang-up split roughly between two technically innovative faucets, three traditional bridge and pull downs, plus the now-discontinued  Delta Saxony single-lever pull-out and a somewhat retro choice by today’s standards.

Delta faucets showed a strong uptick in popularity, led by the electronic Pillar Touch pull-down faucet (above, about $525).  The Pillar Touch — which turns on and off with a tap on the spout or the handle – moves faucet function forward and falls in the mid-range of the price scale. “The touch on/touch off feature works really well when we want to use it and the faucet works like a regular faucet when we want that,” an owner noted. 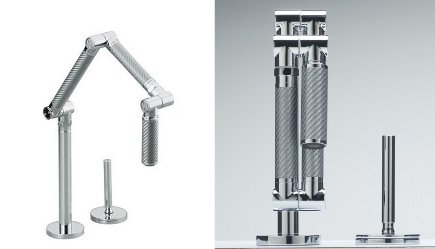 Kohler’s unique “articulating” Karbon faucet (about $1050-$1600) made a strong first showing. A sleekly modern all-in-one, with integral spray and three joints, it moves and remains in any position then folds up when not in use. “I got the Karbon …for the look,” one owner admitted. “Fortunately, it turned out to be awesome functionally as well.”

Classically elegant, Perrin and Rowe bridge faucets ($500-1500) and picks from the extensive but well-priced 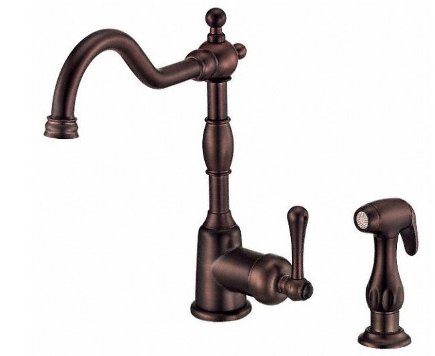 Danze Opulence collection (below, $200-300) could be grouped with the Vinnata in terms of style. “I chose the Perrin & Rowe bridge faucet in polished nickel. I love its simplicity,” one buyer wrote.  “While it never screams for attention it’s no wall flower either.” Another buyer commented that “I have the traditionally-styled Danze Opulence faucet with the separate sprayer…never liked the look or feel of the pulldowns.”