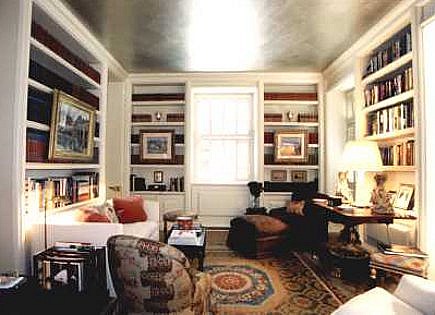 My fascination with silver ceilings began when I watched my dad use silver leaf on old furniture.

My Dad would have loved these silver ceilings. He always had a project or two going. I remember watching him painstakingly apply the sizing (adhesive) then position oddly fragile, 4-inch silver leaf squares on a chest of drawers, peeling away the paper around them and testing out how much overlap was needed to cover. Unlike his mosaic tile, we weren’t allowed to play with that. The next time I thought about silver leaf was a lifetime later when I saw a photo of it on a dining room ceiling. A bell went off and I realized how amazing it would be to do in any room – imagine the tour de force of gluing down Post-It size, tissue-thin metallic paper evenly over the surface of an entire ceiling.

It’s still possible to find craftsmen who know how to leaf a ceiling such as this library on Park Avenue designed by Mario Buatta [top]. The beauty of these ceilings is their cool hue, the shimmer and the natural ability of the surface to reflect light – particularly candlelight. 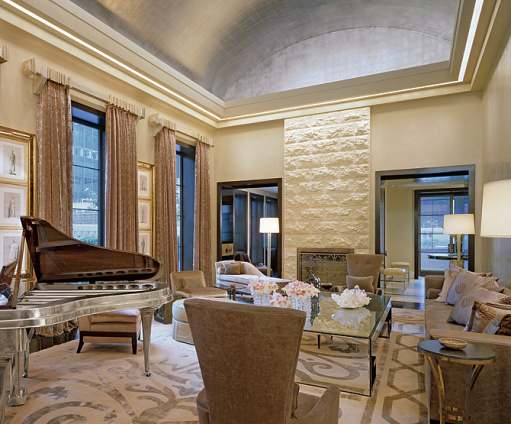 The barrel-vaulted silver-leaf ceiling, in an otherwise staid room by designer Charles Allen, shows how it can be enhanced when properly lit – and also the way the material appears. By drawing the eye up and painting out what looks to have been a fairly unsuitable (or unattractive) stone fireplace, the ceiling sets a formal tone for the room. 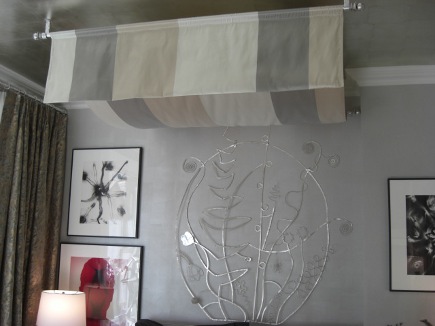 A lovely gray bedroom by Patrik Lönn, at the Inspired Design Showhouse, included gray walls and a leaf ceiling – this close up shows some of it peeking out from above the tented canopy swag mounted on the ceiling. Unfortunately, the room wasn’t large enough to capture an overall shot. 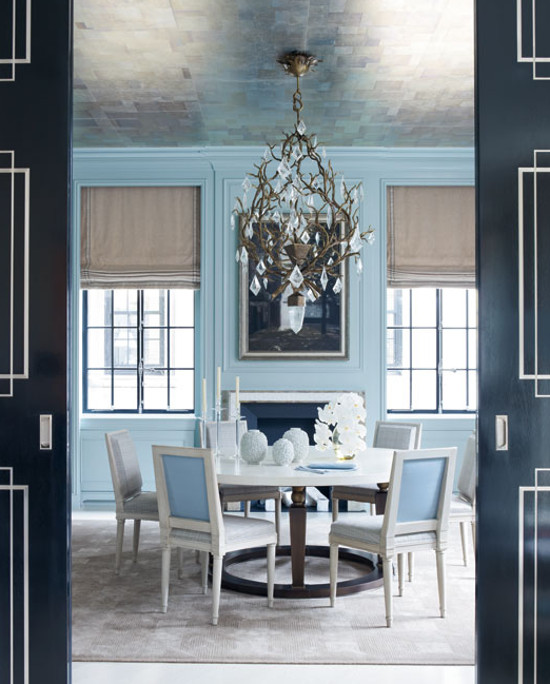 Anyone looking at these photos might assume that the same effect could be achieved with silver paint, metallic wallpaper or even Venetian plaster. It can be. In an elegant pale blue dining room by David Kleinberg, silver leaf wallpaper was used on the ceiling. It’s an exciting idea to mull as a DIY project, though perhaps a mirror, a box or an accent wall would be enough of an adventure for an intrepid home decorator. Like heaven, the ceiling can wait. Or not.