You are here: Home / Decor / Accessories / Mantel Jars and Vases 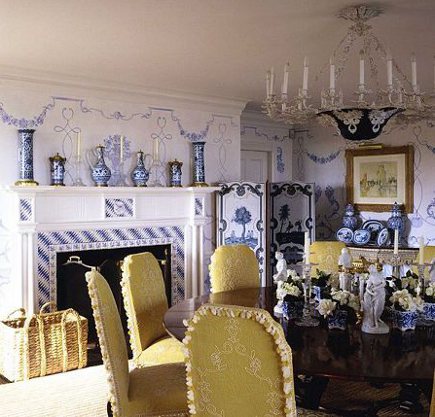 Sets of ceramics, known as garniture, have been timeless fireplace mantel decoration for centuries.

It’s always fascinating to see the creativity people bring to the decorating a fireplace mantel. Inevitably, the fireplace becomes a focal point in a room. Because fireplace walls tend to be symmetrical (and problematic if not) the starting point, in my mind, is a quick look at timeless mantel decor, if only to understand its basics. In any house — no matter what the style — scale and number of what’s displayed tend to be the critical factors.

That quickly takes me to blue and white garniture — essentially sets of three, four or five jars and vases that have been standard mantel décor in Western Europe for four hundred years. A  contemporary view of how blue and white garniture looks today (outside of a palace in England) is illustrated by an ethereal dining room in Long Island by designer Alberto Pinto [top].

While the room is studied and collect-y, and certainly not youthful, it makes a point about color, scale and display that can serve as a format for ceramics, frames, candlesticks or any object of any age destined for a mantel. The traditional formula boils down to: 3 pieces with the most important item in the center. Five pieces for very large mantels, especially if the objects are large and tall. A set of four can consist of similar pieces or two pairs. Pinto’s mantel goes over the top with three pairs and a triple — 9 pieces in all. 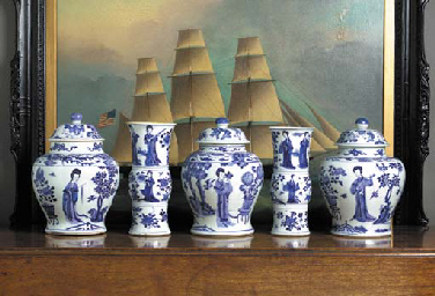 In the world of blue and white, 17th century Chinese K’ang Hsi porcelain, made from about 1680 to 1722, is the mother ship, both for the depth of the blue color and for the intricacy of the decoration. During the 18th century it was brought into Europe by the boatload (literally). The covered jars can be relatively simple or rather elaborate. 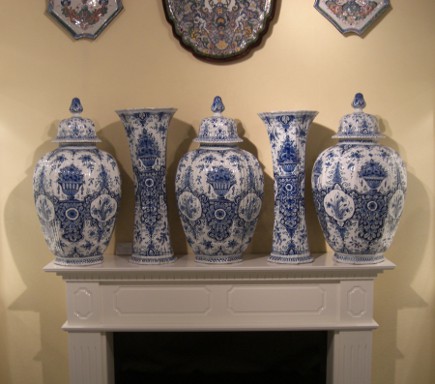 When a war broke out in China that stopped production, the Dutch took up the style, particularly in the city of Delft. They used softer clay but their intricate blue and white decoration was heavily inspired by the Chinese and continues to be collected today at incredible prices. (Delft tiles are perhaps the most famous expression of Dutch blue and white).  This photo, taken in a booth at an Antiques show where the garniture was displayed on a faux mantel, shows how crowded things can look when the scale is off. 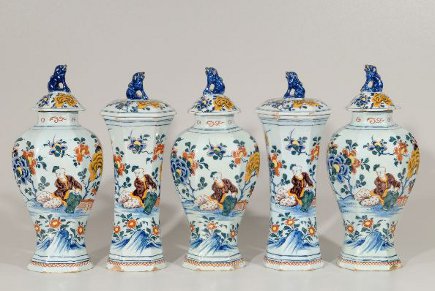 Delft vases also have a blue and white base with the addition of other colors. In the case of this Chinese-motif set that dates from 1760-75, it’s mainly yellow. Note that the vases also have covers and the elaborate finials are in the shape of seated lions. While most of us those of us who thrift and salvage for decorative pieces may not come across a set as valuable or traditional as any of these, I always like to hone my hunting skills on the good stuff so my eye stays sharp. So I’ll stay on the prowl for lion finials.