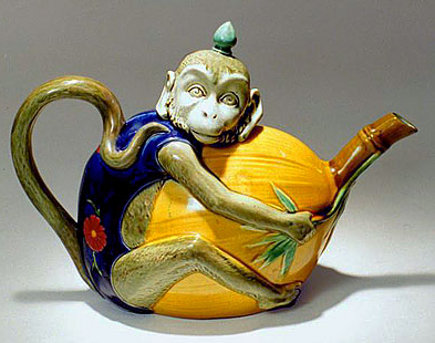 One thing that makes me so partial to antique majolica is the silly foodie-ness of it all.

Before I ever heard the word majolica, I already owned a soup tureen shaped like a head of green cabbage. I’d also been eyeballing salad plates shaped like green lettuce leaves for years — you know which ones I mean. Then I  discovered the “good” stuff, English majolica from the late 19th century — pieces like this iconic large monkey teapot depicting a monkey hanging onto a coconut with a bamboo spout. Judging by the finial, the money’s head is the teapot lid. All these years later, this guy has become one expensive pet. 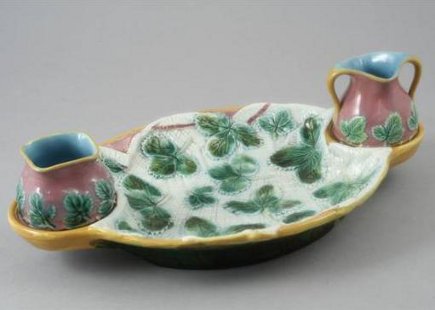 Funny, intricately formed and incredibly colorful, majolica was created in Victorian England for 19th century dining tables and garden rooms by serious china companies like Minton and Wedgwood. George Jones, the Leonardo da Vinci of the majolica world, is a key name who had his own manufactory. One example of  Jones’ works is this majolica strawberry dish, molded with strawberry leaves. A small cream pitcher and sugar bowl are integral to the 14.75-inch long dish. Eventually, majolica was made in  America, and reproduction pieces are still sold today in stores and catalogs. 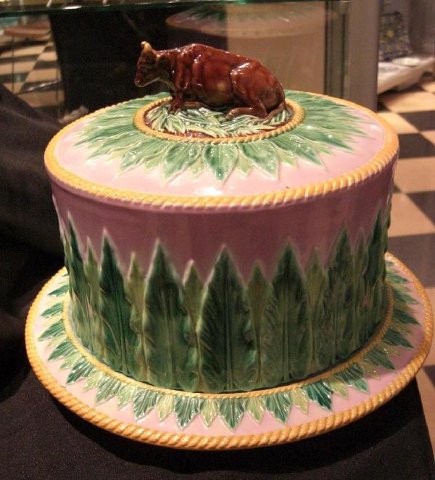 George Jones pieces, like the domed cow cheese keeper with bovine handle, are the gold standard of antique majolica and definitely fall into a you-can’t-miss-this-stuff collecting category. You know it when you see it. And prices reflect the quality. 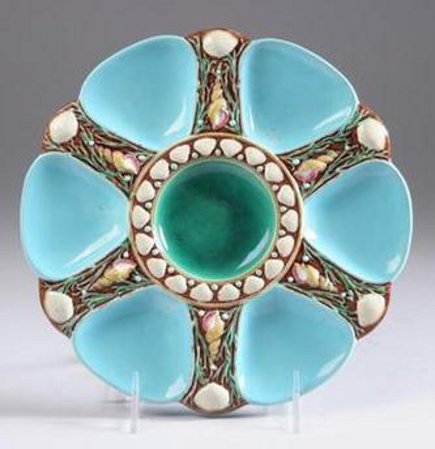 Minton catered to Victorian taste for oysters with plates like these (from 1973) which include seaweed and shell decorations. Seafood and shell motifs were very popular. 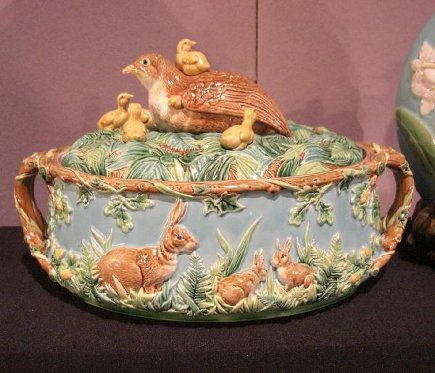 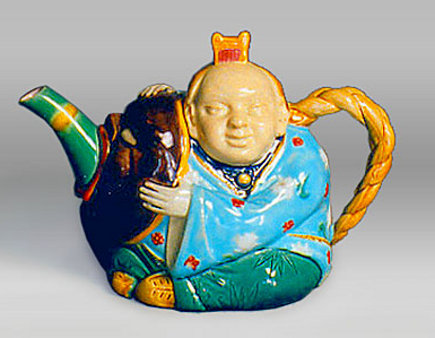 There’s a soft spot in my heart for all the funny-looking humans, animals and mythological figures and historical theme pieces, especially when they are made into teapots. The phrase “all the tea in China” comes to mind with this Minton teapot in the form of a Chinese actor wearing a turquoise floral robe holding a Noh mask. His head is the lid (again) and the handle is formed by his braided pigtail. Revival styles during the late 19th century were commonly inspired by Asia and political correctness had not yet been imagined. 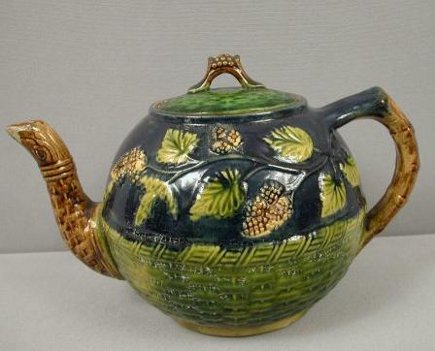 I’m especially partial to the fruits and vegetables or trees and flowers pieces. At one point, I started collecting teapots (but stopped due to their cost) so I collect them virtually and I thoroughly enjoy the many variations on naturalistic themes (even though they may have nothing to do with tea). 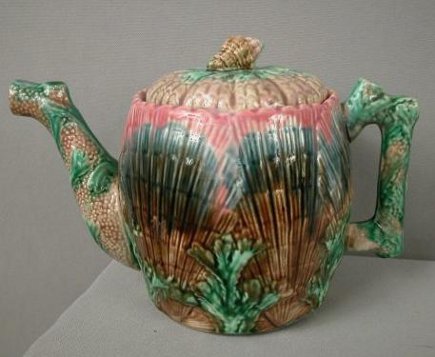 The Victorians actually used majolica pieces like this Etruscan shell and seaweed coffee pot until about 1875 when it became pretty poison, according to information provided by the Majolica Society. Ironically, the glazes that made the vivid pinks, cobalt blues, turquoises and greens look glamorous were lead-based. As in lead paint. So, while many reproduction pieces can be used (I do serve soup in my cabbage) old majolica is strictly for  display. 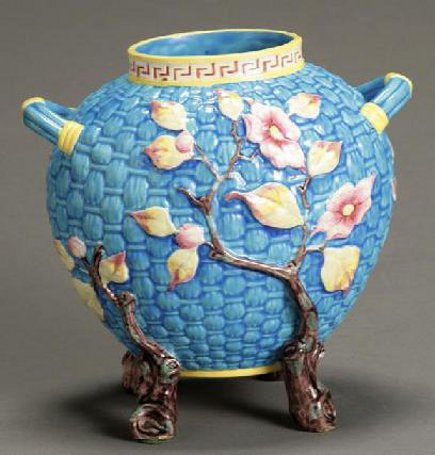 Vases as elaborate as this Royal Worcester turquoise basketweave beauty, with flowering branches and trunk-form legs, have the power to upstage fresh flowers though if I owned this piece I wouldn’t hesitate to use it! 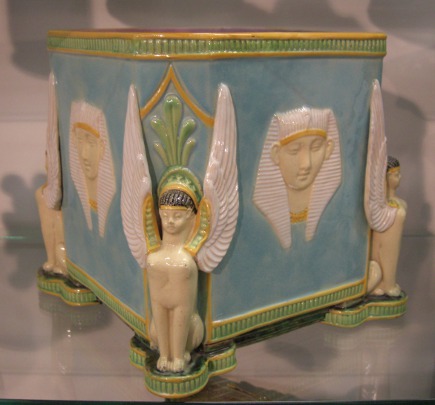 And because most majolica is well beyond my budget and bargains are flukes, I always stop to see it at shows, where this rare jardinière (flower pot) with Egyptian motifs was snapped for my virtual majolica collection. How fabulous it would look  on my antique table surrounded by my blue and white-painted Swedish chairs with sphinx motifs on the backs.

Copy and paste link to quick-share this post: http://bit.ly/IPFIOh