You are here: Home / Houses / Our Houses / My Kitchen Hutch Search & Redo Saga 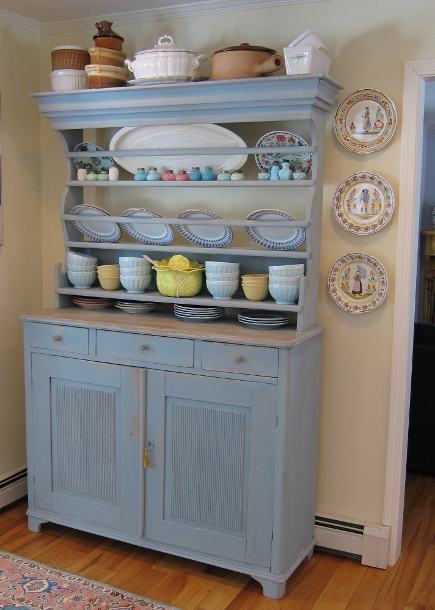 Recently I was honored to see my antique Swedish kitchen hutch pictured on an influential website.

That would be Home Décor News, which picked up a piece from Shorely Chic, where my antique blue kitchen hutch was featured as an inspiration photo. That was taken from a piece the lovely Kat from Low Tide High Style wrote about me last year! Ms. Shorely is engaged and wants a hutch to display her wedding china. As a dish collector I had the same desire which kicked off a two-year kitchen hutch hunt that often felt like an impossible dream. 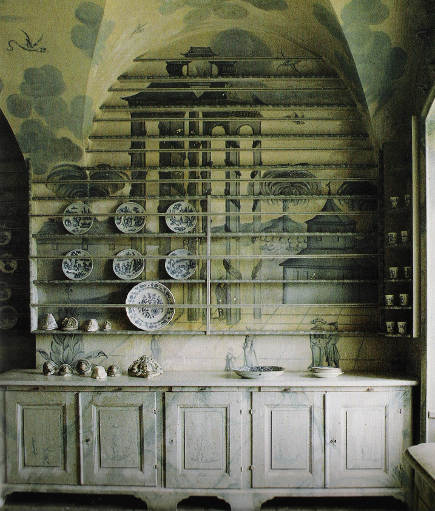 The hutch-of-my-dreams jumped off the page of a book on Swedish historic homes. It’s a magnificent 5-door piece in the spectacular “porcelain kitchen” at Thureholm (1744-47). Naturally, I wanted something smaller but in that same distinct form – buffet cabinet on the bottom and open plate rack on top. I prefer old furniture so a new piece wasn’t an option. And it quickly became clear I wasn’t going to find anything like it on Craigslist or in a thrift shop because I live in New York, where it’s impossible to compete with professional pickers and dealers. 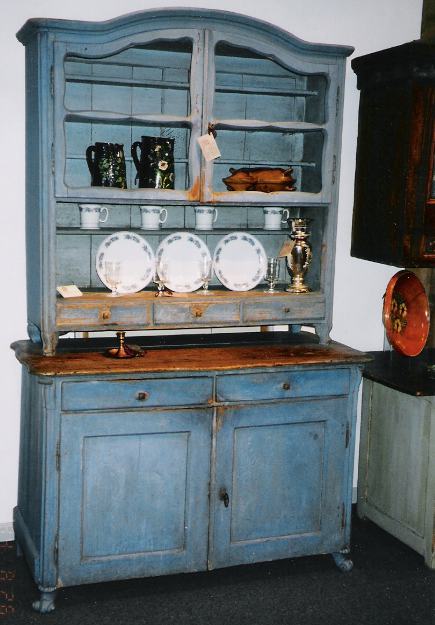 So I began collecting hutch photos and over the summer drove around several nearby states to learn the market. One of the great Scandinavian painted furniture dealers kindly gave me a photo of this amazing blue Rococo hutch she’d sold, which would have been perfect for me had I been able to afford it. So close and yet so far.

After that, I scaled back and focused on finding a buffet cabinet plus a separate plate rack. It was the same idea. And while my first choice was blue, I came to love the soft gray of original Gustavian paint. Less enthusiastic about white, I would have gone with the right one. Then I made a great connection with a dealer who buys old furniture at auction in Sweden at reasonable prices. I know that sounds unbelievable but at that moment — before the decorating magazines caught on to painted Swedish furniture — it was possible.

Over the next year we looked at buffet after buffet.  None really fit my requirements: carved decoration on the doors or drawers, a gallery rail on top to keep things from falling off the sides and back, original paint, not too tall and just about 5-feet wide. I also wanted a time-worn look – something many of us have learned to create with a vintage piece in our own garages. 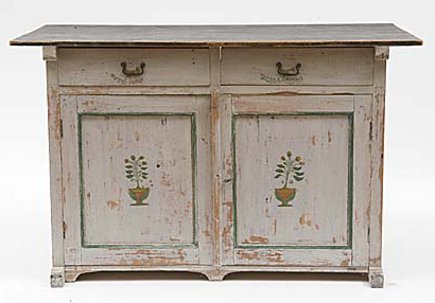 Then a super-charming white buffet with amazing green floral details came along. It was dated 1847 and signed by the maker in one of the drawers. Imagine living with that history! I went for it but dropped out when bidding soared.

For a time, I also looked at separate plate racks (two of them were painted to look like marble!) but I realized that without knowing the exact dimension of the buffet, it made no sense. My search stalled. 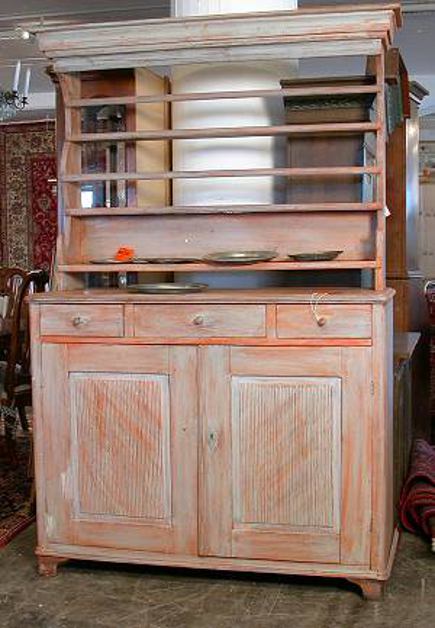 Then this hutch came up for sale. Someone had tried to paint it white but an odd rust color was bleeding through. It was a mess and, as a result, the price was low. It also was old, hand-carved and – miracle! – exactly the right height and width for my wall. The key was missing but I was assured one could be found. But buying it would end my dream of original paint since it needed to be scraped and repainted.

After we won it, I had to decide whether to paint it myself or have it redone by a pro. I love a furniture refinishing project but as I hadn’t actually seen the hutch there was no way to know what I’d be getting myself into with a DIY job. Plus, the low purchase price gave me leeway so I opted to have it hand-scraped and refinished with authentic Swedish tempera paint by professional restorers there who – I was assured — could make it look as old and worn as I wanted.  Did I want to provide a color sample? 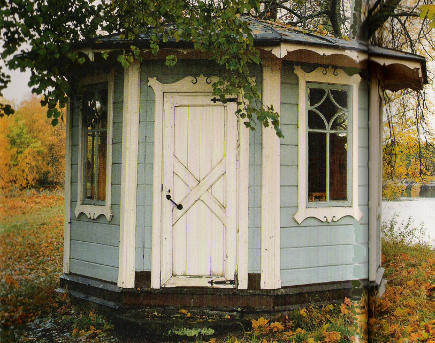 After settling on blue, I sent a photo of this 19th century gazebo for reference. When the swatches came back green, I panicked and rejected them. Six months passed but the promised second round of color swatches — painted on tiny scraps of wood — never arrived. I began to wonder whether I’d ever see the hutch and if I had made a terrible mistake. 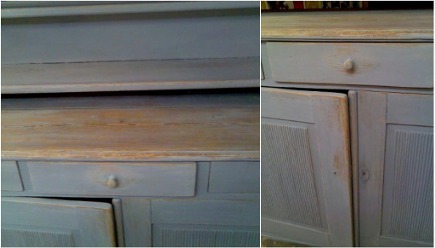 Just as panic was setting it, the dealer sent me photos taken at the restorer’s studio. Was the color, a pale blue, okay? Was there enough sanding and  distressing where I wanted it (mainly on the top and front)? There wasn’t much to say. The repainting was done and it looked great. 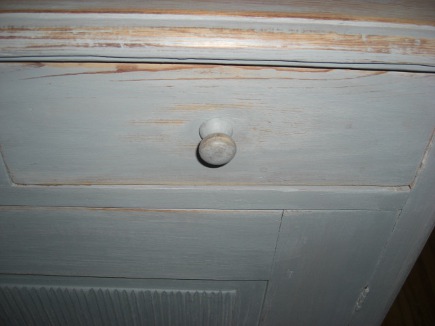 Six more months passed as the finished piece sat in the warehouse waiting for shipment. Then, suddenly both halves were being wheeled through my back door. Only then was I able to spot the handmade knobs on the drawers, old hardware, and the graceful hand-carved raised design on the doors called gadrooning. The pale blue looked great against my ivory-yellow walls and blended well with other blues in the house. Plus, the key had been found in a drawer. 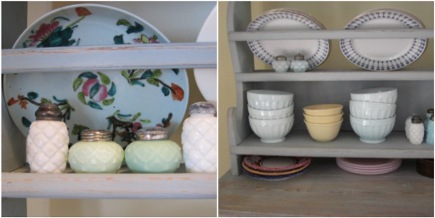 The inside was filthy and dusty. So after wiping it out and letting it dry, I brushed on two coats of Tung oil and waited for it to cure. Weeks passed before the smell dissipated and only then was I able to fill the cabinet and arrange my plates and bowls on the open shelves.  The hutch immediately looked like it always had been in that spot – my criterion for judging whether a piece of furniture is exactly right.

Not everyone has the time or inclination to have an impossible dream, or turn a hunt for a piece of furniture into a major two-year project. And I could not do it the same way today. Still, there are always great finds for someone with the energy and persistence to track them down. And if I can find the perfect piece against all odds, anyone can.

For more on dishes displayed on the hutch see my Swedish Heirloom Tablescape.