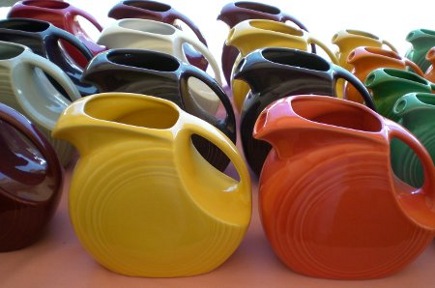 America’s most colorful dinnerware Fiestaware has been a popular favorite for nearly a century.

At its initial introduction by the Homer Laughlin China Company in 1936, Fiestaware was produced in five colors: Red (orange red), Blue (cobalt), Green (light green), Yellow (deep golden), and Old Ivory (yellowish cream). In 1937 a sixth color was added: Turquoise (Robin’s egg blue). These were manufactured until 1950 — with the exception of red, which was discontinued during WWII when the government halted the production of uranium, which was used in its glaze. 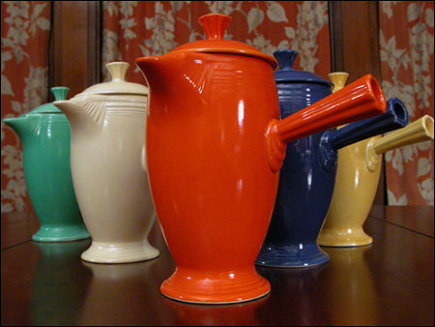 In 2007, a vintage Fiesta Harlequin Coffee Service, 31 pieces, sold for $130 at auction. That’s a great price for so many pieces! 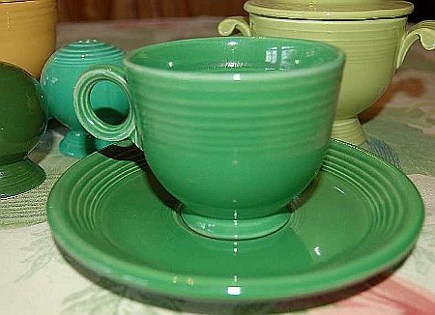 In 1959, red was once again produced, along with this new medium green, while some other colors were retired. The four available Fiesta colors were Red (original orange red), Green (new Medium green), Yellow (original golden), and Turquoise (original Robin’s egg blue). These were produced for only ten years and in small amounts, since the line’s popularity was declining. As a result, medium green was not produced in great quantity and today is the most highly prized (and expensive) collectible color. Vintage red is very popular since it, too, was out of production during the war years. The original yellow, and the 1937 turquoise, were produced continuously until 1969 and therefore two of the colors most commonly found.

In the late 1960’s, Homer Laughlin offered a new color as part of a supermarket promotion—a dark brown known as Fiesta Amberstone. Then, in 1969, Fiesta Ironstone was introduced in only three colors: The original red, renamed Mango Red; Turf Green, and a brownish yellow dubbed Antique Gold. This new line, though, was not successful and Fiestaware was discontinued in 1972. 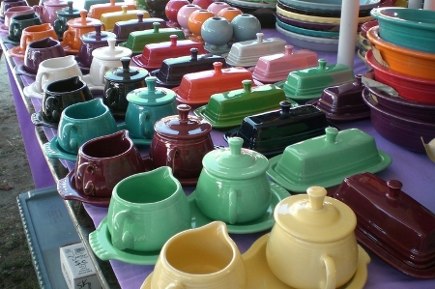 When I attended the Brimfield Antiques fare I saw literally acres of Fiestware for sale by dealers. These while these were not vintage pieces the bright colors show why this china has such universal and long lasting appeal. This was the china of my childhood and all I have today and six lavender plates. One day, perhaps I will buy some more. 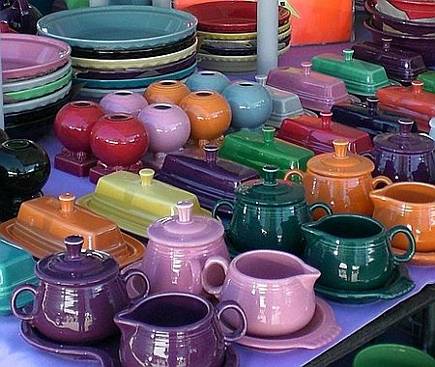 In 1986, Fiestaware was reintroduced by Homer Laughlin to mark the 50th anniversary of the introduction of the vintage line. Post-‘86 Fiesta Ware differs in material construction from its predecessor, with significantly shinier glaze. New colors have been introduced — recently Indigo and now Evergreen. But neither matches colors in the original line.

–Text and research by Jeanmarie Evelly