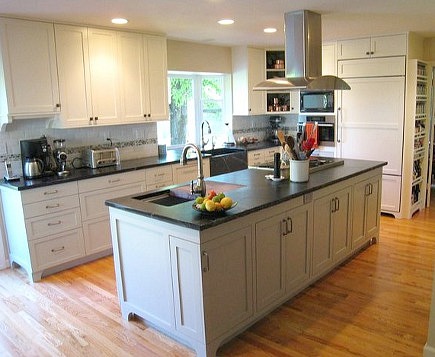 How a retired chef created a serious cook’s kitchen with great storage and two amazing sinks.

When Care Morgenstern set out to create the kitchen of her dreams in a 80’s house in the California wine country, she thought about all the “crappy kitchens” she’d had to put up with over the years. “Function was my primary goal,” Morgenstern says. “I hoped that it would look nice but I really wanted it to work the way I wanted.” As a retired, self-taught personal chef, her needs were for a serious cook’s kitchen — basic but not simple. 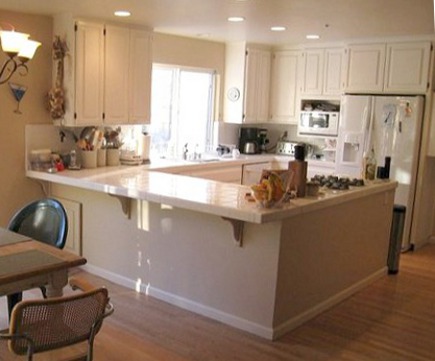 In this house, she had struggled against a kitchen with a peninsula that created a logjam. And like many kitchenistas, she craved a six-burner range plus double ovens even though the working space is a modest 15- by 16-feet. Reality bit when two different contractors explained the ovens wouldn’t fit and the budget proved to be an issue as well.

Many good kitchens have such a story — a path to beauty and success that required a detour. In this case, it was question of accepting what could be done “without knocking down walls and making do with the space I actually had. I really thought about the kitchen and the end result is much better than my original design,” she says. 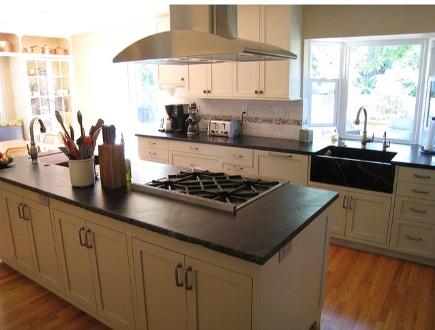 A cousin who is an interior designer came to her aid on the aesthetics and helped communicate what she wanted to the father-and-son contractor and cabinet maker who dispatched the remodeling job in just six weeks. The result is a highly original open kitchen with a unique island, customized dining area, and top appliances that function superbly for someone willing to make intelligent renovation trade offs. 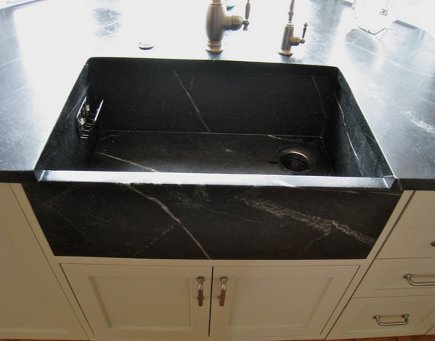 The keys to this serious cook’s kitchen are two big sinks. On the kitchen’s perimeter in front of the new bay window is the custom M. Teixeira Barocca soapstone farm sink used exclusively for clean up. The drain and disposer are located in the top right-hand corner so they are “not covered up when there are a lot of dishes,” Care says. 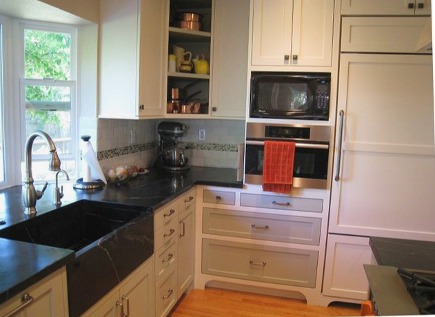 A Miele Optima dishwasher sits on the left of the sink. The faucet of choice is the large Kohler Vinnata pull-down.  Nearby [right] is a Miele speed oven — “it heats up quickly and is the right size for cooking for two” — microwave and Sub-Zero BI-36. Perimeter base cabinet drawers are contrast painted with pale green-gray, Dunn-Edwards Serene Thought. 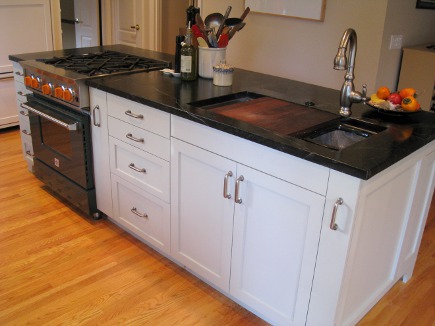 The second sink – used exclusively for prep — takes up one end of the 9-foot-long island which replaced the peninsula and opened up the kitchen to the dining area. 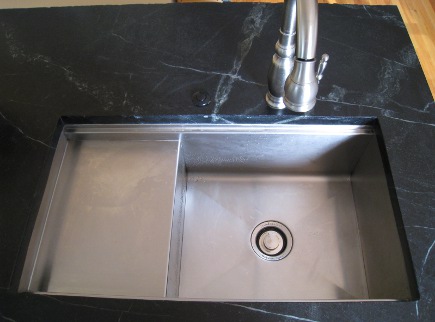 It is a 33-inch stainless steel Kohler Stages – the small version of the best and most functional sink on the market right now. “I knew it was perfect for me,” she says. “I had originally planned a 6-burner range in the island and a 18 to 20-inch prep sink. So I gave up the two extra burners for the Stages. I haven’t regretted that decision at all since I spend so much more time at the prep sink and I rarely need that extra burner.” 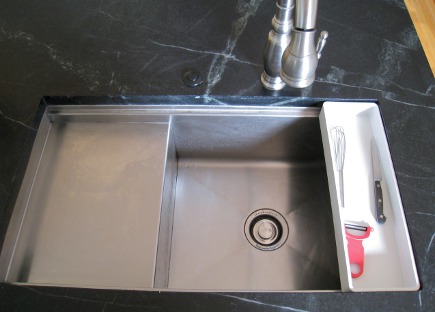 The Stages features an interior rim and a stepped down integral ledge which helps keep things off the counter. Two inserts – a utensil tray and natural wood cutting board – slide across the top or stow away in a rack under the sink. A smaller Vinnata faucet keeps the counter styles consistent. 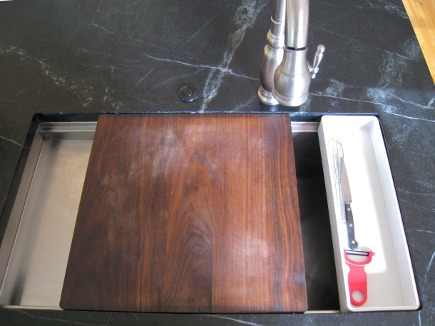 “When I have company, I cover the sink with the cutting boards and use it as a countertop. It’s perfect.” 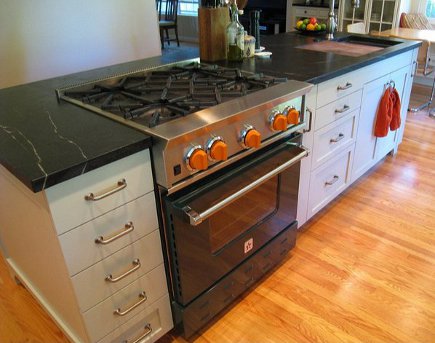 The island also houses a 30-inch, black-green Blue Star range, retrofitted with “Signal Orange” custom knobs. Orange is the favorite accent color for the kitchen which is painted in Dunn-Edwards Pearl White. The 36-inch island hood from FuturoFuturo “does a great job with smells,” Care says, though she adds it’s a bit noisy when cranked all the way up for wok cooking, as most hoods are. 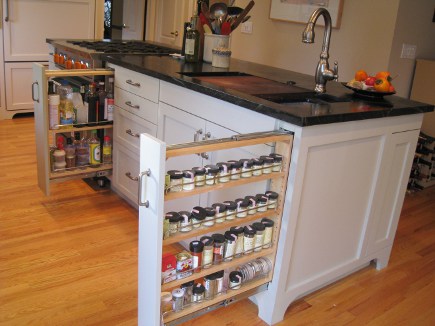 To make every inch of the island count, two narrow spaces became condiment and spice pullouts fitted with Rev-a-Shelf inserts – one on the range end and the other nearer the prep sink. 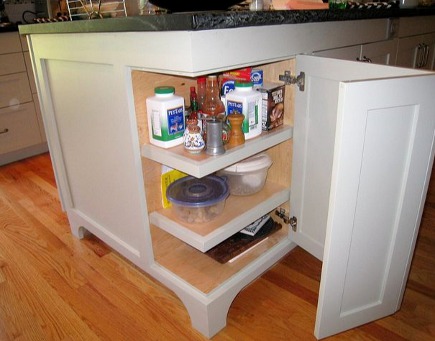 There’s even a surprise corner cabinet on the non-working length of the island as well as a special edge on the soapstone. Concealed hinges have a definite advantage when used on this type of cupboard to cover corner spaces easily and discreetly and are easy to install with just a few instructions. 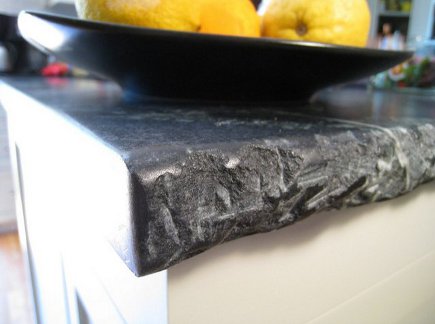 The chiseled edge of the island is “very subtle,” Care  explains. “Most people don’t see it right away but when they do they go “Oh!” And they always want to touch it.” 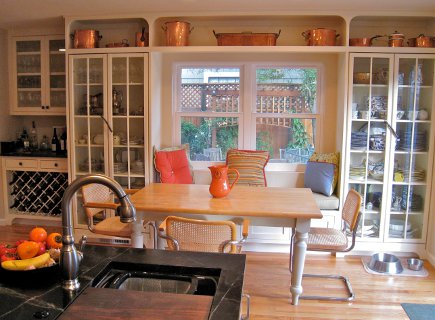 To create a congenial dining area, one set of French doors was replaced by a pair of windows and a 6-foot long banquette. Existing cabinets flanking the new built-in seating were reworked and hardware was replaced. Even with all the great details, the room isn’t completely done. “We really need to replace the dining room table and chairs,” says Care. “So if you find or think of something that might work, please let me know.”