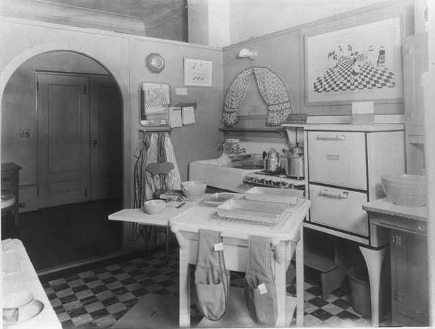 The 20th century ushered in huge changes in the kitchens which is why I wanted to explore kitchens 1920-2010 in actual photos. Many times I’ve mentioned the Victorian era kitchen style popular between 1900-1930 and how we keep reinventing it nearly a century later. Still, there’s nothing quite like photos of vintage kitchens — like The Kitchen Practical, 1929, above — side-by-side with recently renovated kitchens to put the point across specifically. When I came across an album of 1920s kitchens, it became clear to me how much things had changed – and also how little. 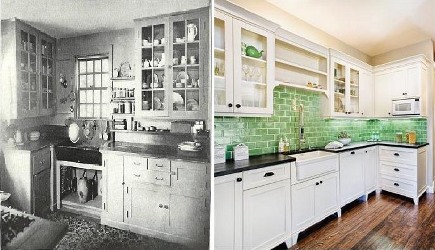 The 1920s prototype for the built-in (fitted) kitchens [left] combines cooking, cleaning and storage. Previously, those tasks had been delegated to separate, adjoining rooms. The vintage sink featured separate hot and cold water faucets mounted on the sink wall. There are open storage shelves and commonly, no cabinet to enclose the area below the sink. These cabinets have no recessed toekick – much like those made today by Plain English, a British firm and the same cupboard latches and drawer pulls are still popular. A contemporary fitted kitchen has a surprisingly similar look overall with open storage, too. Updates include a colorful tile backsplash and, of course, a built-in microwave. 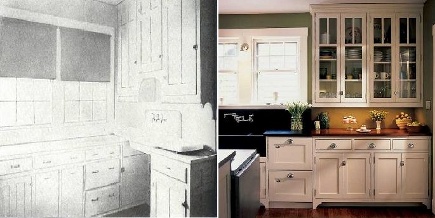 Such similar sinks, cabinets and window walls show that new is not always different and nostalgia is never far away. Even the two sinks faucets are basically identical. 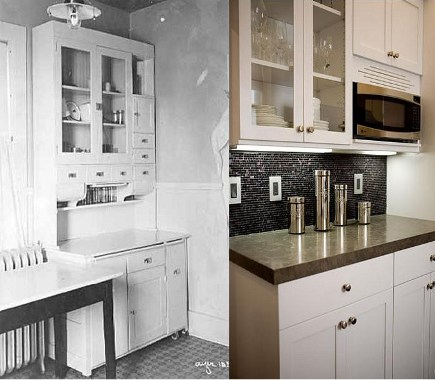 Hutches in the 1920s were treated like furniture – note the table to the left. They also included small drawers and a storage shelf just below the top section. Today, drawers have given way to under-cabinet lighting. 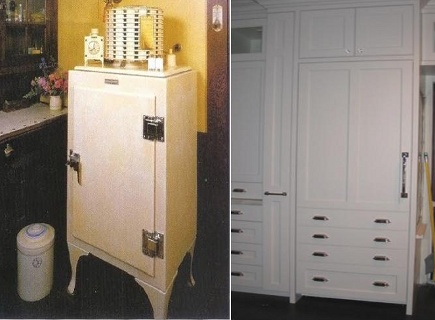 The Monitor-top refrigerator, with a top exposed compressor, was introduced in 1927. Today’s paneled fridges still have compressors on top, plus freezers below, and retain the same boxy shape with legs.

Vintage kitchen sinks like this 2-leg fireclay console were freestanding and often had a drainboard on each side. Today’s version is smaller, with a board that slides across so a pair of faucets can be used. 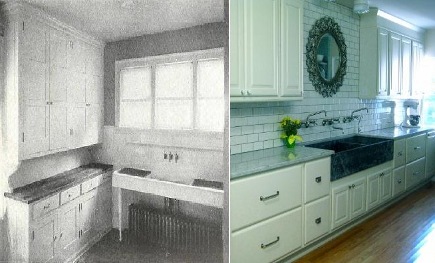 Scullery sinks are the largest of all. Though the style of these is different, each is so grand it boasts a trio of faucets plus adjacent cabinets. 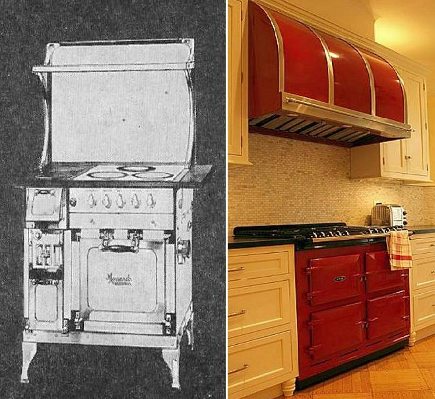 The 1929 Monarch stove is a black and white beauty. It immediately made me think of our pale Celeste’s red Aga 6-4 range with its matching Modernaire hood. 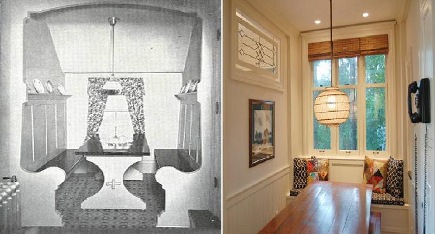 Breakfast nooks in separate, but adjacent rooms, were common in the early 20th century. The vintage nook [left] was converted from pantry space. In one of my favorite kitchen 2009 renovations, the owner pierced through the wall to provide a pass through to the kitchen for the narrow breakfast nook in her home.