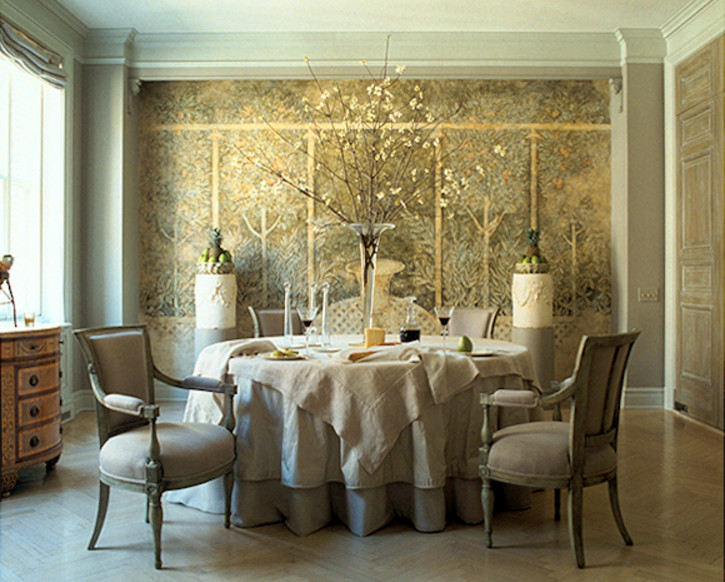 Accent mural walls used a single image as a backdrop to add atmosphere to a room.

My fondness for elaborately decorated mural walls – painted, stenciled, fabric-lined, or papered — isn’t very limited. The dynamic image a large scale mural provides creates a focal point and functions like a stage set. These images from New York designer John Saladino show murals that are elegant and one-of-a-kind with amazing effects. His style is stately and each of his murals contributes both a sense of architecture and atmosphere to a room, which is what might be expected from a high end designer. The mystery of a golden garden infuses and enriches a monochromatic dining room [top] where there’s no rug and very little furniture in the relatively large space. While the table is round, it’s centered on the mural wall. That’s helped along by sculptures on tall pedestals positioned along the wall in line with vertical elements in the mural design. That symmetry adds formality and a stately air even though the table is draped with rumpled linen. 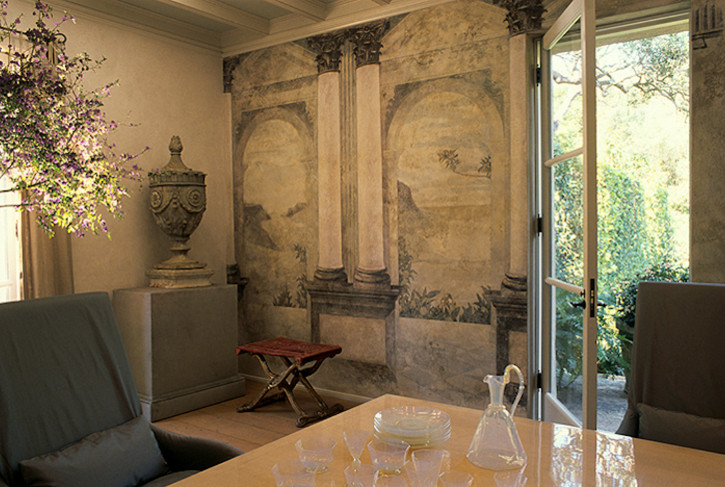 In an intimate sitting area adjacent to a garden, a grisaille mural with classical columns and arches enclosing landscapes acts as a pair of windows adjacent to an actual door. The perspective of the scenes inside the mural’s arches gives a sense of depth to the wall in a most old fashioned way. The lack of color here also keeps the wall in balance with the other furnishings in this tone-on-tone room. It takes a refined eye and keen design sense to produce great accent walls but with the right image and materials it really isn’t out of reach.