You are here: Home / Houses / Our Houses / Cinderella Fireplace 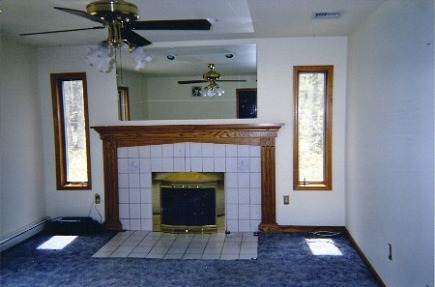 The story of a salvage mantel and how that lucky find transformed a really ugly fireplace.

The dirty little secret when we bought our house is that neither of us liked it. My husband fell in love with the property. I wanted a mid-century ranch – all on one floor. But there we were, buying a two-story center hall colonial with ubiquitous not-our-taste wallpaper and a fireplace described even by the demolition guy as “butt ugly.” Essentially, left over floor tiles had been used on the surround, the fireplace mantel was out of proportion for the size of the firebox  and glass doors made it difficult to use. However, the fireplace functioned perfectly, which is always the most important issue, our contractor said. 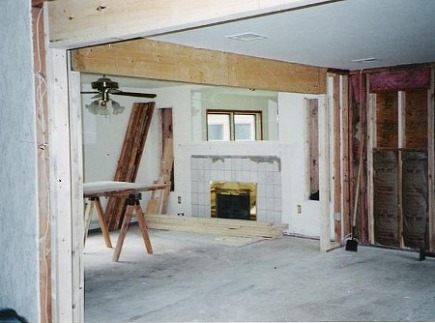 The plans called for creating a new living-TV room by removing a wall then enlarging all doorways on the first floor to create an open flow through the kitchen and front hall. That made the fireplace important because it would be framed by built-ins and visible from every sight line downstairs. At the time – 2003 – the affordable new mantels I found had zero personality and seemed too formal.  By chance, I saw a red and gray chippy mantel for sale in a salvage store. The dimensions didn’t work but I realized that, with some running around, I might find one that would fit. 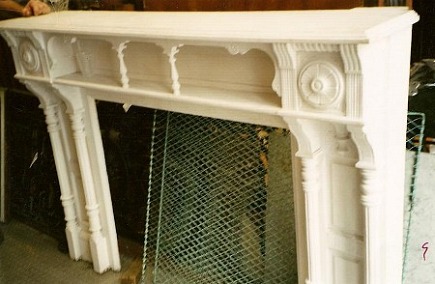 My next stop was a NYC salvage shop. Near the entry, a charming Victorian mantel with double shelves that looked way too large was propped against a wall. I passed it by and headed down to the basement where there were several lovely pieces, one painted a soft gray, but after measuring I realized that old house mantels can be really small. None of them would fit. On a whim, as I was leaving, I pulled out my tape and sized up the white Vicky. I was shocked to find that the firebox dimensions were near perfect — and the overall size ideal for the built-in wall. The downside was that it needed to be transported 90 miles, and stripped. I had no idea what I’d find underneath but after rechecking the size, I bought it. 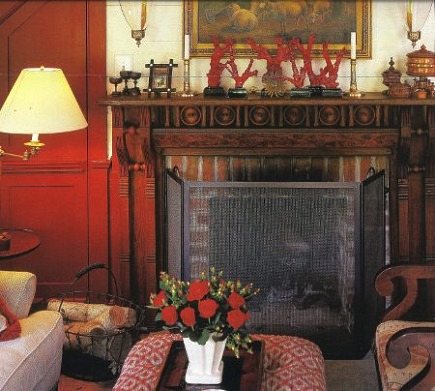 Only later did I realize how much it resembled the only mantel inspiration photo I had clipped for my files.

One day, I received a call from the strippers to come look at the mantel which was ready for a stain and finish. When my contractor and I arrived, we immediately saw that it was white oak – absolutely blond, quarter-sawn white oak without a single streak or mark — the Jean Harlow of all mantels. The guys at the strippers didn’t quite get why we wanted to immediately load it onto the contractor’s truck without staining or adding a single drop of polyurethane. 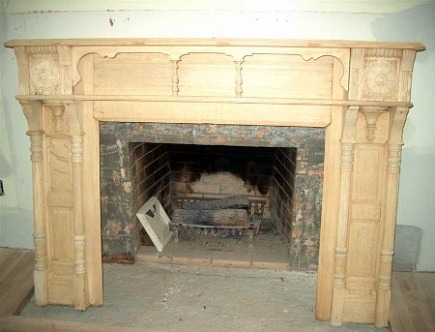 Old white oak is heavy stuff, so it wasn’t easy for the two of us to get the mantel off the truck and inch our way into the house where we propped it up against the firebox. Clearly, it was “the one,” and close in color to the new ash floors. 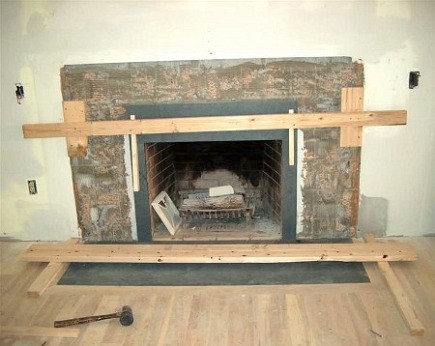 For the stone on the surround, marble seemed too fancy, a lagos-blue limestone I liked too stain-prone, and tile not an option. The contractor found pieces of steely gray pietra Cardosa, sometimes used for kitchen counters, and installed it before I could object. The style and color proved just right. 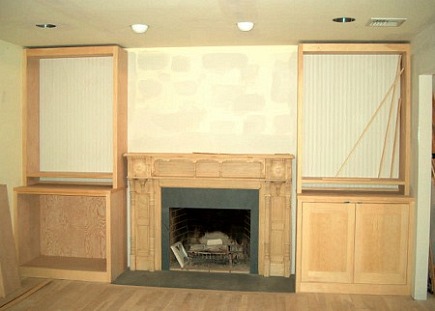 Somewhere in the basement, I have the 6-foot piece of oak our carpenter removed from the back of the mantel when he cut it down and fit it perfectly to the wall. 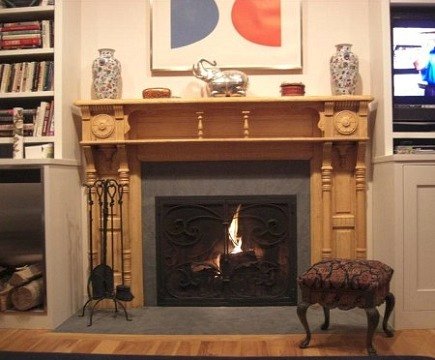 Three coats of tung oil later, she was honey-blond and a nice match to the floor. Once all the furniture went in, the fine tuning began. Originally, I chose ivory as the wall color but that washed out as did a blush-pink the following year. The dark gray stone around the fireplace was the problem and the wall didn’t look right. 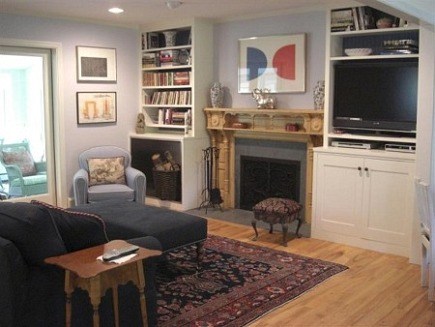 Once I painted the backs of the bookcases a blueberry hue from Benjamin Moore called Old Blue Jeans and the walls in Ellen Kennon’s Seaglass — a soft Gustavian blue – the fireplace stopped nagging me. At last, the transition from tragic to terrific was complete.