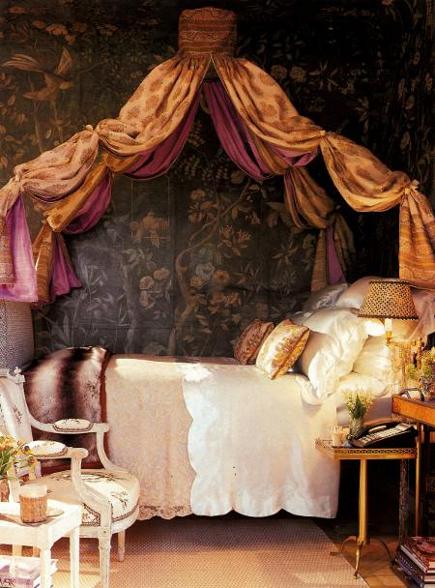 Extreme decorating and elaborate interiors never feel modern to me. Too much furniture, fabric, texture, color, or too many accessories – anything that impedes ease of use or requires abundant maintenance feels out of step with today, at least until someone creates an iPhone app for housework.

However, the Slatkin apartment  — splashed over 19 pages of House & Garden in 1999 and aired again, unchanged, last Fall in New York Magazine with “before” photos —  has the complexity of a giant jigsaw puzzle and a treasure trove of ideas (large and small) along with juicy details to savor. Practical? No. Slightly mad? Yes. But fascinating.

First let me say to 99% of you reading this: it’s not your taste, you couldn’t live in it, and neither could I. The point of showing this 6000-square foot soufflé is not love/hate, good-taste/bad-taste judgments, or how-much-is-too-much to spend on 12 rooms, even in a Fifth Avenue apartment building when the next owner is likely to rip it apart (the new owner of Jacqueline Onassis’ apartment gutted hers).

Part real, part faux, this is purely obsession-decorating, a profound need to display (by actualization) a designer’s deep and arcane knowledge of the golden age of interiors from 18th and early 19th Century France and Russia. It’s also “I’m-one-of-the-gifted-few-can-do-this” marketing to an elite clientele by a designer who is rarely photographed, has a web page (but no site), creates these rooms from scratch, and can afford to live by his own definition of necessity.

The guest room [top] features a French Empire (ca. 1805) lit de voyage (portable bed) festooned with silk. An 18th-century Venetian lace coverlet and Louis XVI  bedside table and armchair with embroidered period upholstery is in keeping with the sensibility of a chinchilla throw at the foot of the bed. 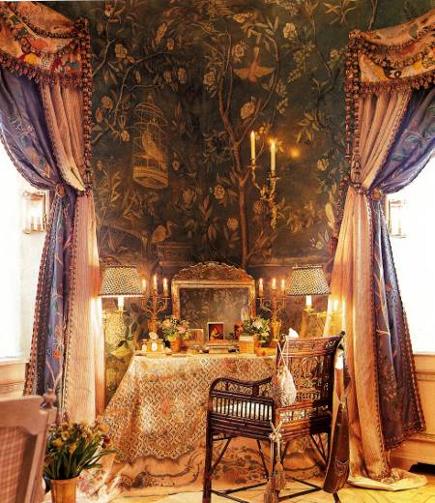 In one corner of the guest room, a dressing table is covered in hand-painted silk from the designer’s workroom along with an 18th-century Chinese bamboo chair. Two layers of embroidered silk curtains are tied back and elaborately trimmed and tasseled. Embroidery motifs on the (bluish) under-curtains were taken from an antique vest. Scenic walls, depicting flowers and birds, are a combination of 18th-century Chinese originals and matching rice-paper panels which took 7 months to create, then age with 5 coats of tinted wax. 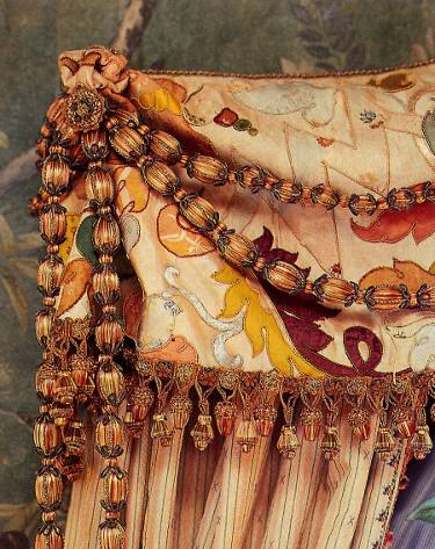 Eighteenth-century Venetian panels inspired these curtains which have elaborate tassel fringe (based on period documents) along the bottom of the valance, and ball fringe on the leading edge. Note that the pattern on the valance fabric is appliqué. 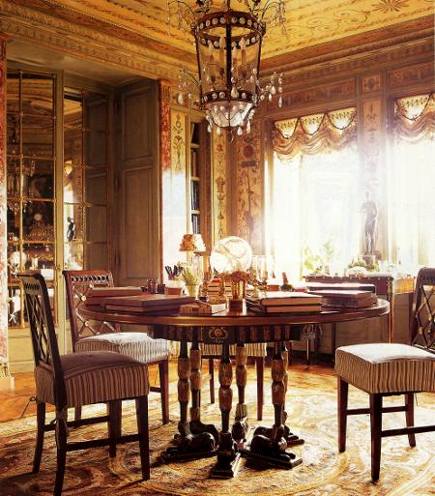 Eleven foot ceilings permitted the creation of historical scale in a pre-World War II apartment, where rooms were combined. Walls and the ceiling canvas required 9 months to create in the Neoclassical style (inspired by Raphael’s loggia at the Vatican). Borders disguise uneven ceiling beams. A pair of mirror and parcel-gilt doors widen and deepen the doorway.  Eau de nil, a watery green period color, took four artists 10 weeks to apply. The Empire style table (ca. 1800) boasts a 6-footed base of sphinxes resting below papyrus shaped parcel-gilt legs. Egyptian motifs became chic following Napoleon’s invasion of Egypt, 1798–1801. Both chairs and chandelier are 19th-century Russian and the French Savonnerie rug (a  flat-weave treasure) dates to about 1790. 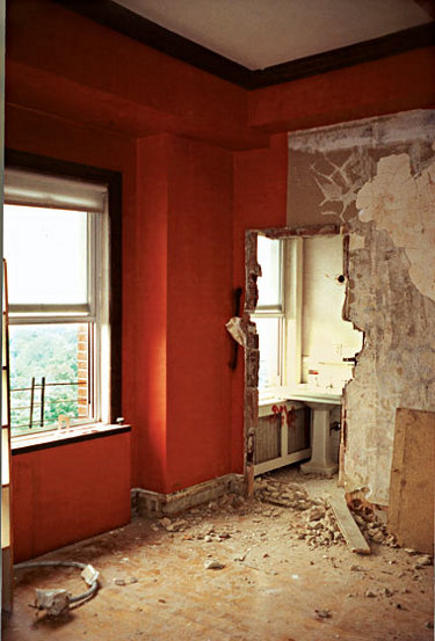 The dining room overlooks Fifth Avenue. The original strip-oak floor was replaced with geometric parquet done in the 18th-century style. Details of the new floor can be seen around the edges of the room. The bathroom became a storage closet. 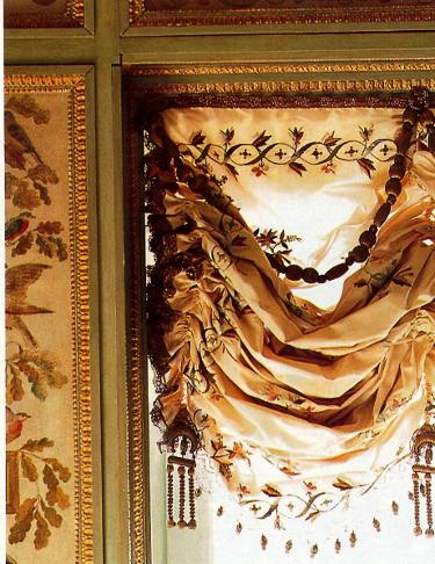 In the dining room, elaborately trimmed, embroidered silk, Russian-style shades cover the windows. It took two months to install the dining room which had been fabricated in France and included carved, gilded and painted wood paneling. The area between the windows is hand-painted and covered by a panel of hand-blown glass. 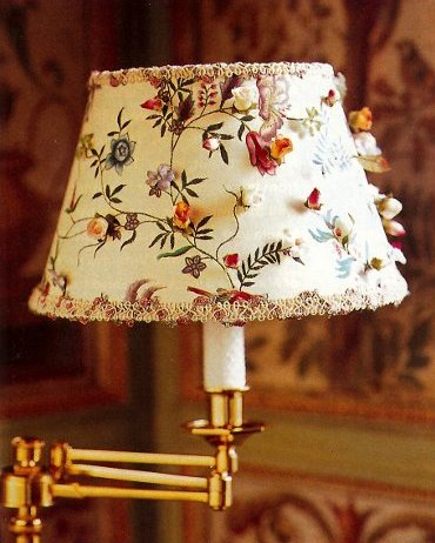 This modern, swing-arm sconce is set low on the wall (you can spot it just to the right of the dining room doorway) has an amazing shade made in the designer’s workroom from 18th century Chinese hand-painted silk, with silk blossoms, and bordered with gimp. 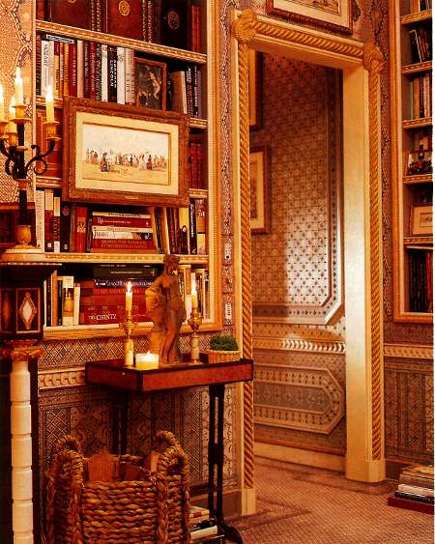 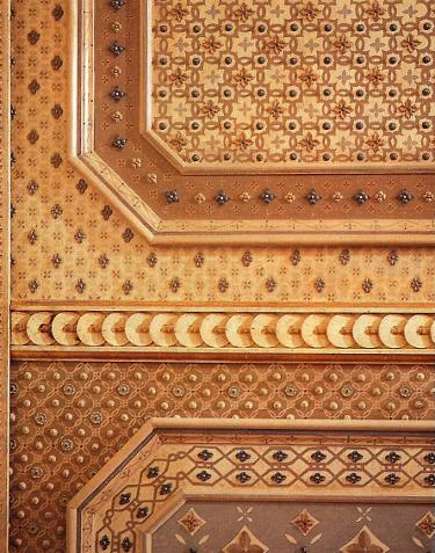 The patterned fabrics are combined with hand-painted and stenciled plaster appliqués to create a 3-dimensional effect on the walls of the hallway leading from the bedroom to the closet. 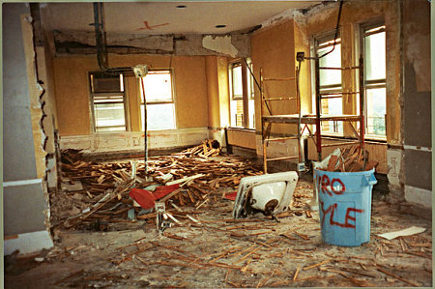 Two rooms were combined to create a 46-foot living room with an antique-oak parquetry de Versailles floor, which the designer had installed upside down to enhance the texture. Afterward, the floor was bleached, limed and glazed with 10 different shades of gray to look worn then fixed with polyurethane. 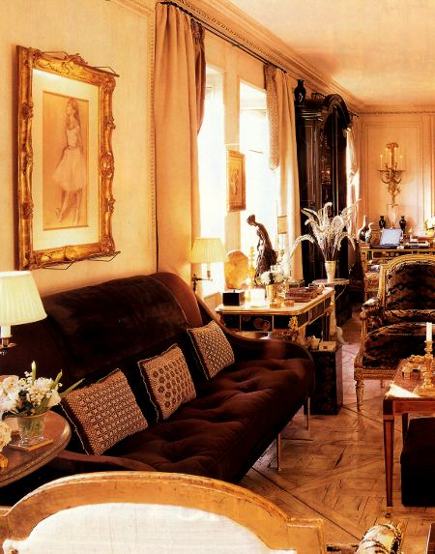 The sofa is upholstered in cashmere, with suede arms (a Degas pastel floats above it). Embroidered and quilted silk curtains hang on a double return rod.

The living room floor was was ripped out, along with the window air conditioner and metal window guards. 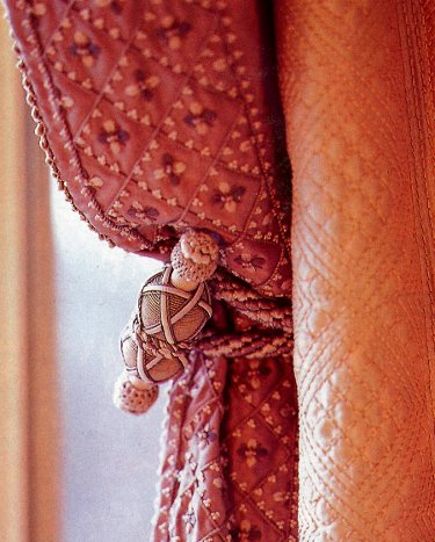 A close up of the dusty-rose living room under-curtains reveals embroidery plus an intricate design inspired by a gown depicted in a Veronese painting in the Hermitage Museum. The designer based the tieback on model in Marie Antoinette’s bedroom at Versailles.