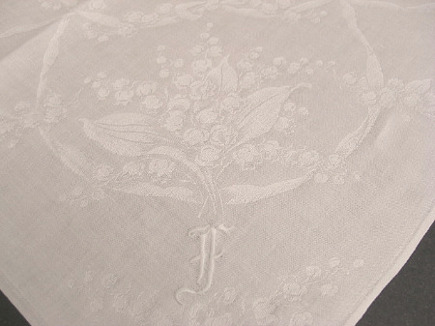 Over the years, I’ve purchased vintage white linen napkins and hand towels as I found them at antique shows. Some are monogrammed; some are not but I’ve been slow to use them because they require hand-ironing. And so they sat in the cabinet for far too long.

Earlier this summer I embarked on a napkin-washing project. In part, my aim was to test various brands of “fancy” linen washes I’ve been playing with for while (I’ll have a laundry washing post coming up to discuss my favorites). In part, my stuff simply needed laundering.

I love old napkins and towels because they iron perfectly and crisply — no hidden percentage of synthetic fibers. And for me, the astonishingly lustrous and complex woven details of white-on-white patterns are incomparable because they remain lively after 40, 50 and 60 years of use. (They are, however, murder to photograph.)

One beauty [top] features lily of the valley with sprigs of the gracefully belled flowers and leaves arrayed in a garland. The flower itself is a telltale clue that this is a trousseau napkin. My Mother was married with a lily of the valley bouquet and my Dad wore a sprig as a boutonnière. It’s likely this dates from the late 1940s, or early 1950s, when lily of the valley was chic. The area between the corner and center figuring leaves just enough space for the monogram. 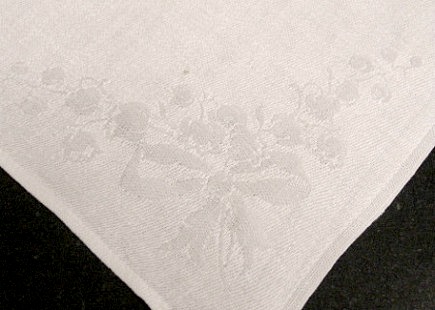 A less elaborate napkin has the same motif, tied with a sweet bow. Today, this type of napkin is (sadly) considered quaint and high maintenance. 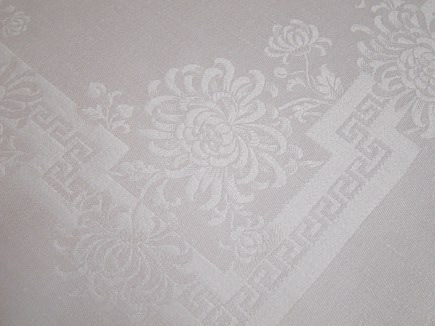 I don’t recall when I purchased this set of a dozen very large napkins but I immediately fell for the formal design of chrysanthemums and a Greek key-motif.  The border has the flowers piercing the zig-zagging Greek-key banding. In the center there’s an oblong cartouche  (or frame) interwoven with blossoms. I’d imagine these date from the 1950s, though it’s difficult to tell.

Textile experts will tell you to store fine linens flat. That takes a good deal of space, which I don’t have. So I do fold them before storing but in my defense, the crease is not ironed down. When I double fold them for the table, they have a lively springiness that makes them attractive to pick up and unfurl since there are no hard lines. 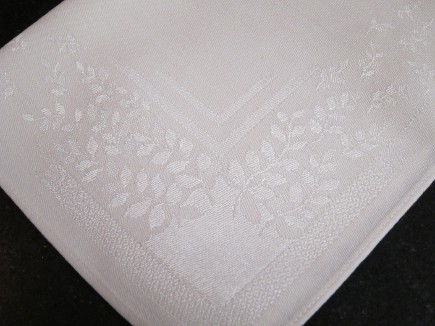 I’ve inherited several sets of cocktail napkins, mainly from the 1950s or early 1960s. The centers of these are absolutely plain — it’s the corners that feature mounds of earth with leaves growing out in each direction — the perfect frame for a wine glass. 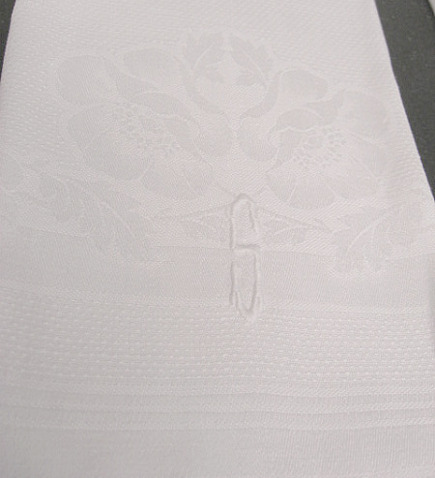 Monogrammed linen hand towels were a household staple before terry cloth came into daily use. And if you think about it, monograms were the means to tell who in the family each towel belonged to.  Rows of a delicate knot pattern surround the poppy motif on this vintage towel. When these rectangular towels are folded lengthwise into thirds, and draped over a bar, they have a special time-worn elegance unique to vintage damask.