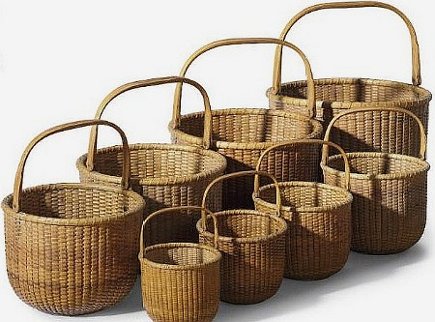 First moored off the coast of Nantucket, Massachusetts in 1854 in an area known as the South Shoals, lightships (essentially floating lighthouses) were strategically placed around the rocky shores to aid passing ships in navigating around the perilous area.  Crewmen on board would raise whale-oil lanterns at night to guide these vessels. 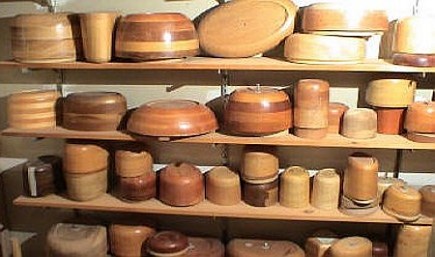 Spending several months at sea, the crewmen took to basket-making to fill idle hours. The weaving process began with a hand-carved mold (like these) to shape the basket. The bottom is constructed of solid native hardwoods.  Staves (vertical pieces of wood) provide the frame into which the cane is woven.

Back on land, they would sell their handicrafts, fetching $1.50 for a small basket up to $50 for a set of eight nesting baskets.  These works of art became known as Lightship Baskets. The set of 8 nesting round swing-handle lightship baskets [top], featured at a 2009 Christie’s auction, sold for $37,500. These were attributed to Captain Andrew J. Sandsbury (1830-1902) one of the best-known lightship basket-makers of the 19th century.  These baskets would have been crafted during his time aboard the famous Nantucket South Shoal Lightship from 1867-1869. 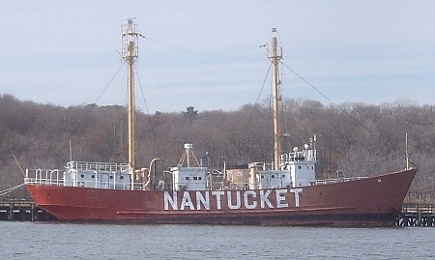 The Nantucket South Shoals Lightship was established on June 15, 1854.

A rare labeled Nantucket basket reads “Made by Thomas W. Barrally on Board of South Shoal Lightship.”  $2,850.00 from Nauticalnantucket.com.

Lightship baskets are still woven in Massachusetts. This video features a group of women who gather to spend time weaving together and shows the various parts that make up a classic lightship basket.