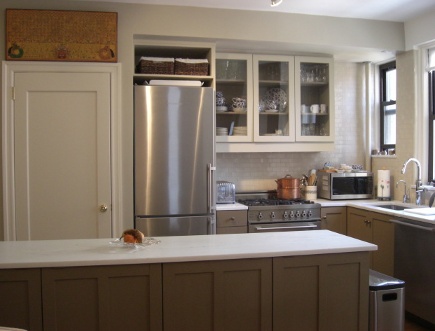 Key kitchen upgrades in our apartment and the difference each one made.

In the summer of 2009 we made some kitchen upgrades. Our apartment kitchen is small (14’ x 8’) and our building was built in 1924, so the walls are lath and plaster.  Nothing had been changed since 1986 when Mr. AM moved in and installed new appliances. The previous tenant had combined the kitchen and dining room and both open into the entry. A hallway to the bedrooms also is visible from the front door. 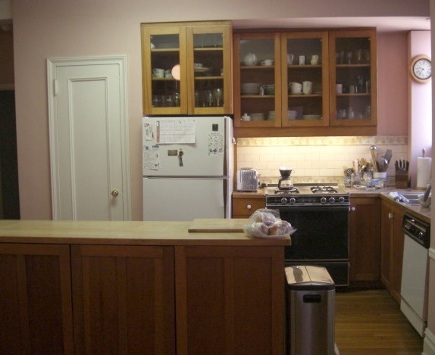 I wrote about the old kitchen at various stages before, during and immediately after construction. But now that it’s 99% finished – my new rug is down but window shades are still temporary – there are before and after photos to illustrate the 7 key areas we improved and the difference each one made. The 80s-vintage white GE refrigerator and dishwasher were old, noisy and mismatched but still going strong. The old microwave door latch was iffy. Worst was the small top-loading washer and unvented dryer set on a shelf in the utility closet [door left of refrigerator]. 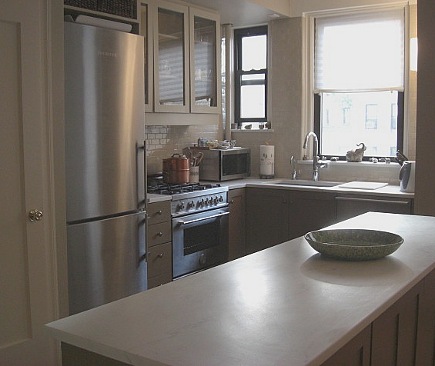 Stainless steel appliances were the obvious choice. I chose a Liebherr 30-inch bottom mount, free-standing refrigerator which slipped into a box we built. Made in Germany and popular in Europe where space is tight, Liebherr has a 0-clearance door which allows counter depth installation next to a wall (see first photo, above). 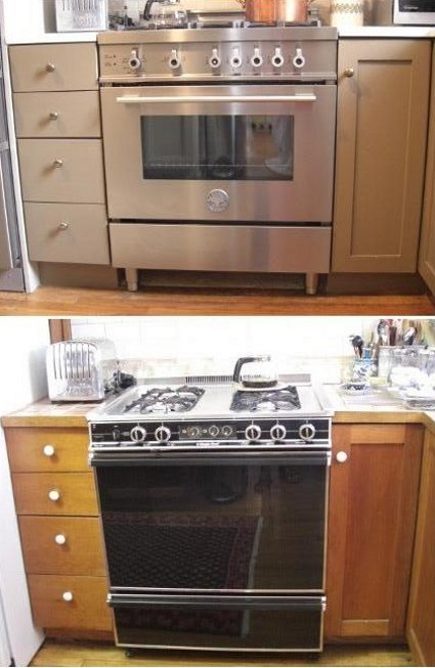 The Bertazzoni 30-inch all-gas range [top] has great style and worked well in a kitchen with  no vent hood. It fit neatly into the space occupied by the old Modern Maid [second photo], which was an old but good stove I actually considered keeping. In the end, it had to go. 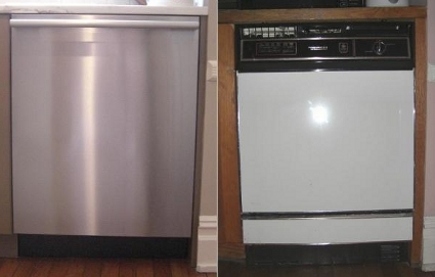 The new Miele Optima dishwasher [left] is virtually silent and the Express setting lets us do a small load quickly. The 20-year-old GE Potscrubber [right]  sounded like a truck without a muffler — so loud we could hear it on the other side of the apartment. 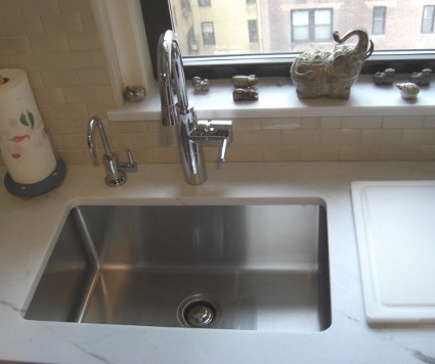 The old, double-bowl drop-in stainless steel sink was replaced with a 30 x 16 x 10-inch deep Julien 16-gauge stainless sink, undermounted. When the 2-year old Hansgrohe faucet and Dornbracht nickel soap dispenser were mistakenly junked by the contractor, I replaced them with a KWC Systema pull-down faucet and installed an EWS filtered water system and compatible small faucet from Newport Brass.  We also added a garbage disposal. A bonus from the new counters were the new marble windowsills made from remnants of the slab. 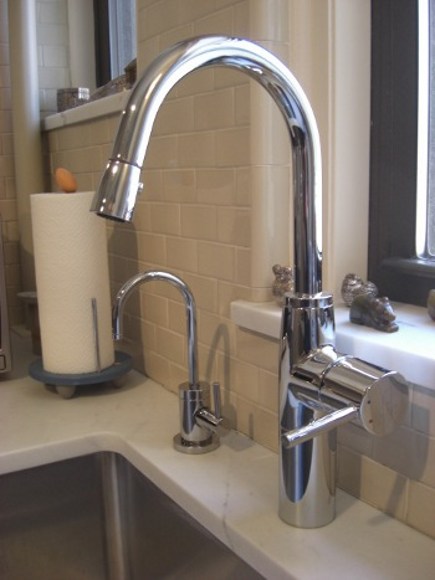 My faucet choice was based on 4 must-haves: a sprayer (activated by a button in the nozzle), 20-inch height (to line up with the bottom of the corner window sill [above left], 9-inch projection (the sink drain is 5-inches from the back, not in the center) and price. The KWC met them all and the quality is superb. The EWS water filter has a UV component that ensures water free of any bacteria or grunge from old building pipes. 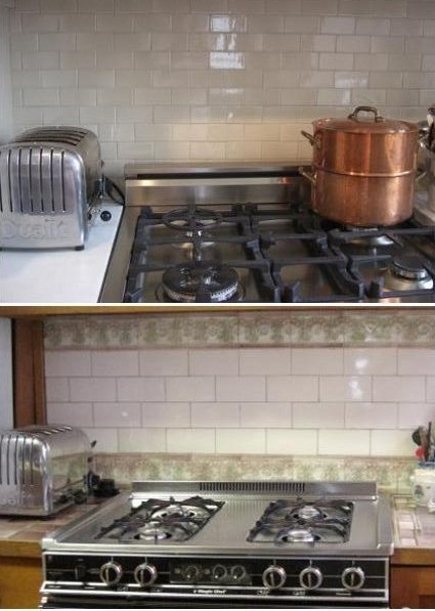 The antique subway tiles [bottom photo, above] were replaced by 2 x 4-inch Ann Sacks Essentials tile in Glossy Fog, [top photo, above] a color that matched the paint used in the room. Tiling from the counter to the ceiling behind the range and around the sink [see sink photo, above] eliminated painted walls in a relatively inaccessible and heavily used area of the kitchen. 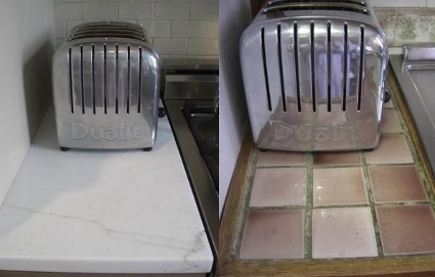 The difference between the worn out mauve-tile counters [above, right] and the marble is easily compared on the heavily-used small counter between the stove and refrigerator. The toaster resides there and it is a major landing spot for cold drinks and hot coffee. The marble is sealed with Akemi Nano, which has minimized etching and prevented staining. The island had a grime-magnet maple butcher block top, which I also replaced with marble. I was able to salvage the butcher block by having the contractor saw it into two pieces. It now has become a utility bench in the basement of our house. 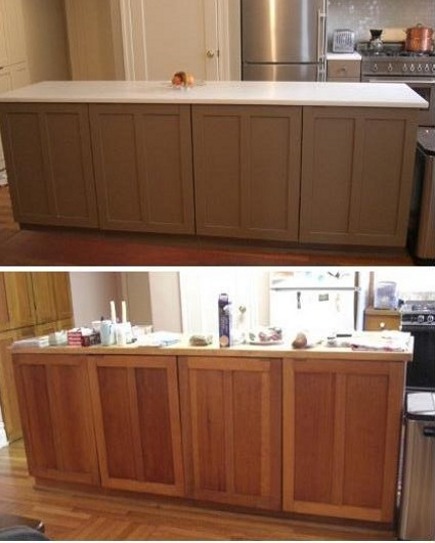 Technically, the cabinets were not worth preserving yet replacing them would have increased the cost of the project by nearly 30 percent and extended the completion time significantly. The cabinet over the stove was painted the same as the wall and tile color, Farrow & Ball’s Stony Ground. Bottom cabinets and the entire island were painted with Farrow & Ball Dauphin, which creates a good contrast with the ambered oak floor and blends extremely well with stainless steel. White porcelain perimeter drawer and cabinet knobs were replaced with Rocky Mountain hardware bronze mushroom knobs to match bronze finger pulls on the island. 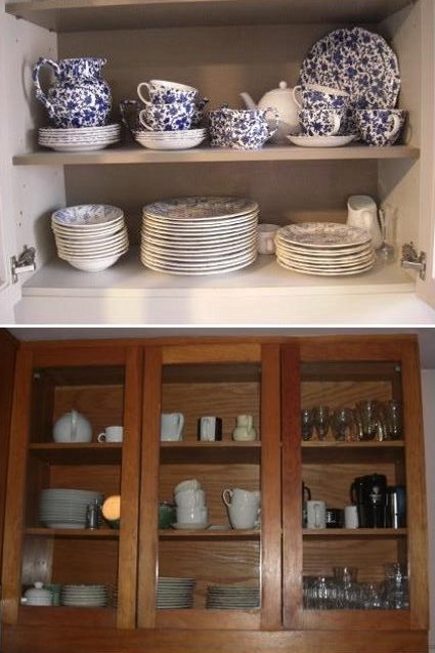 The  front of the top cabinet was painted to match the walls. Inside [top photo, above] we painted the back and shelves with Dauphin, for contrast and the sides with Stony Ground so they would blend in. As a result, the shelf-color is not noticeable. The old cabinets [bottom photo, above] had an ugly finish and needed repainting. 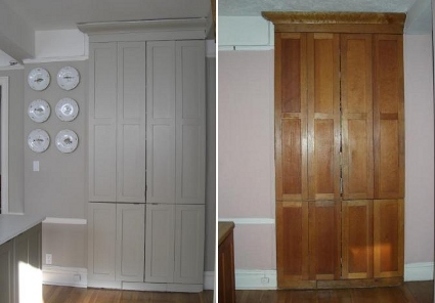 Painting the floor-to-ceiling pantry at the end of the kitchen in Stony Ground to match the walls made a big difference in the appearance of the entire area. Had I replaced the cabinets this would have become a hutch.

The kitchen had a practical but unattractive central fluorescent ceiling fixture. There was an ancient fluorescent task light under the upper cabinet and a 80s vintage wall-mounted can light that provided little general illumination for the sink area.  We added an 8-foot track with 3 heads to the kitchen ceiling, replaced the single fluorescent task light under the cabinet with two, and chose a Foscarini milk-glass fixture for the wall to the right of the sink. 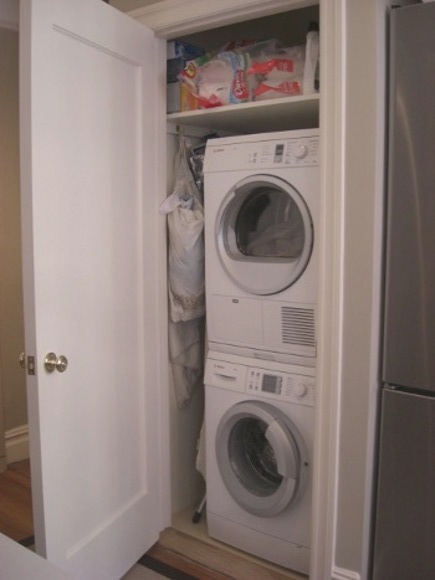 The laundry closet had a 24-inch door [see second photo from top] which was widened to 32-inches to make all the space accessible in the 40-inch enclosure.  Because a makeshift top-loader and dryer pair was replaced by the excellent Bosch Axxis stackable front loaders, we were able to add shelves for critical paper-product and laundry soap storage above. Additionally in the kitchen,  moldings which did not properly extend from the dining room were added to give all the walls a more finished and coherent look. The popcorn kitchen ceiling was stripped and replastered. These 7 kitchen upgrades made a huge difference in the style, cleanliness and enjoyment of the kitchen even though the cabinets were not replaced. As upgrades go, they were well worth the considerable construction and work.