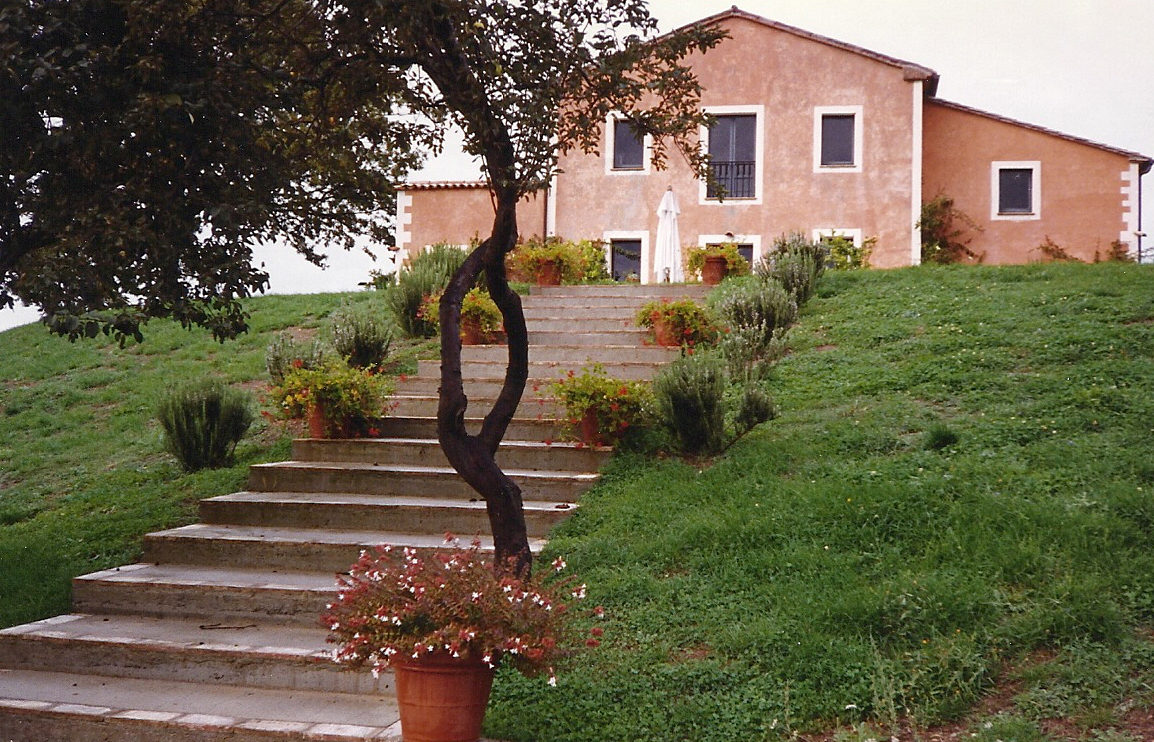 Tour our home away from home, an 18th c Tuscan villa with a cooking fireplace.

One of the most magical months of my life was spent in a villa we rented in a tiny town in Tuscany in 1991, More than any other house, this one influenced my idea of comfort and nurtured my love of simple furniture and old things. At the time, the house had been rebuilt and furnished by an Italian count and decorator from Rome who acquired the 18th century farm house and property two miles outside the town of San Casciano dei Bagni, an ancient spa in the Val d’Orcia about two hours north of Rome. 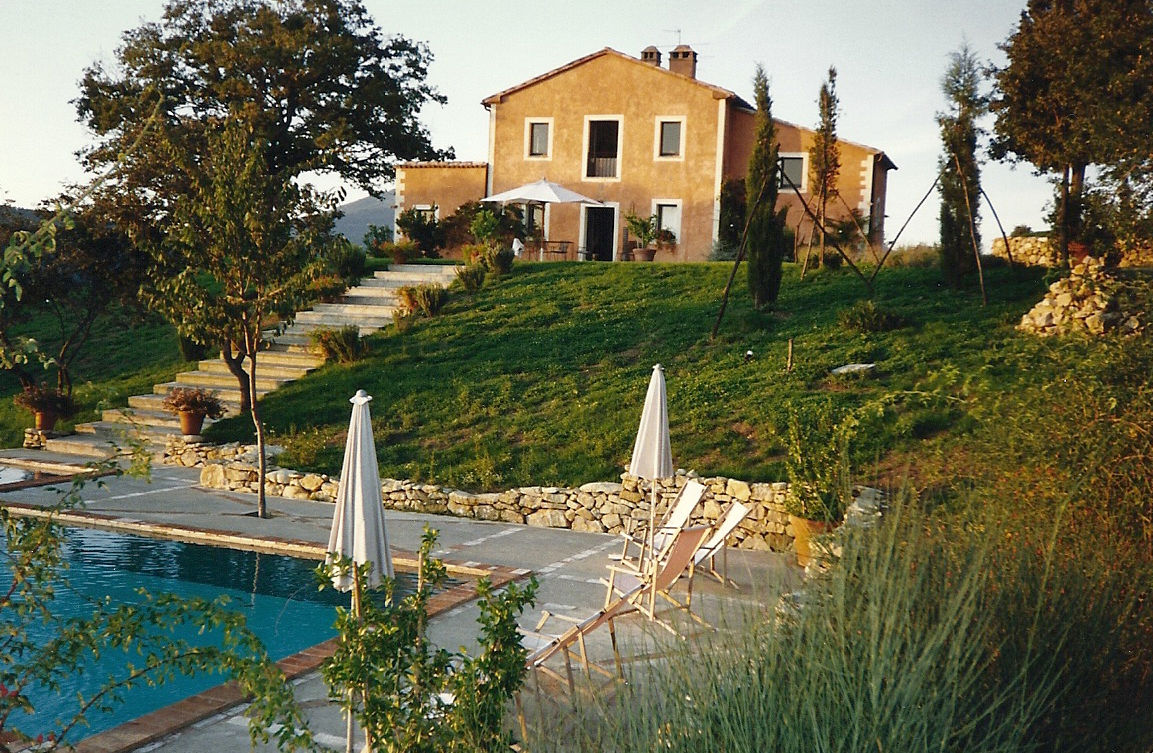 His sister-in-law, also a decorator, had renovated a house in the same town and a friend who was renting that one found it for us. The house was called La Vetrichina. At one time, I knew the translation of the word (I think it means dragonfly but I cannot find it in the dictionary to confirm that and never wrote it down). 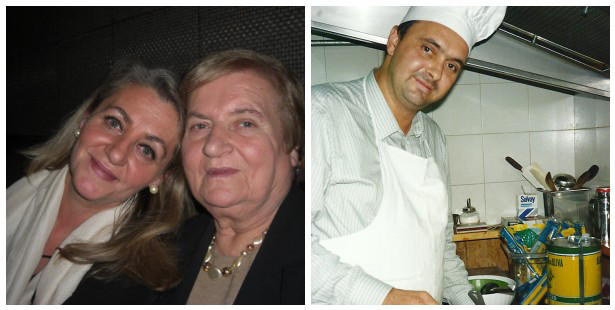 During the month we lived in San Casciano we met our dear friends Daniela Boni, her mother Bruna [L] and her husband Silvestro Baraldo [R] who own the Bar Centrale in the town piazza and who now have the Ristorante Daniela next door to the bar, where Silvestro is the chef.

Our friendship with their family continues to this day – we have in New York when they visit. Silvestro and Daniela also opened the beautiful hotel Sette Querce across the piazza, where we stayed one year. The albergo was decorated by Daniela’s friend the English designer Trisha Guild of Designer’s Guild.

Anyone planning a trip to Italy should spend a few days at Sette Querce, a most welcoming and enchanting place.

The year after we rented the villa, it was sold. The new owners have converted it into a rental property which looks nothing like “our” house. Before we left that November, I photographed every room so I could never forget them. These were informal photos done just for myself, with no idea of publication. For many years, I could not find them. I thought they had been lost when we moved. Then, two months ago, I stumbled across thes photos at the bottom of a bag my husband had packed away. I was sifting through his papers in search of photographs for an anthology of his war writings that I was helping him put together. Searching for war, I found peace! Finding these photos, and being able to share them and the story of how we came to know that house, has been like an emotional reunion with an old friend.

Now that you know the background, here is the first part of the tour — the ground floor of the villa. 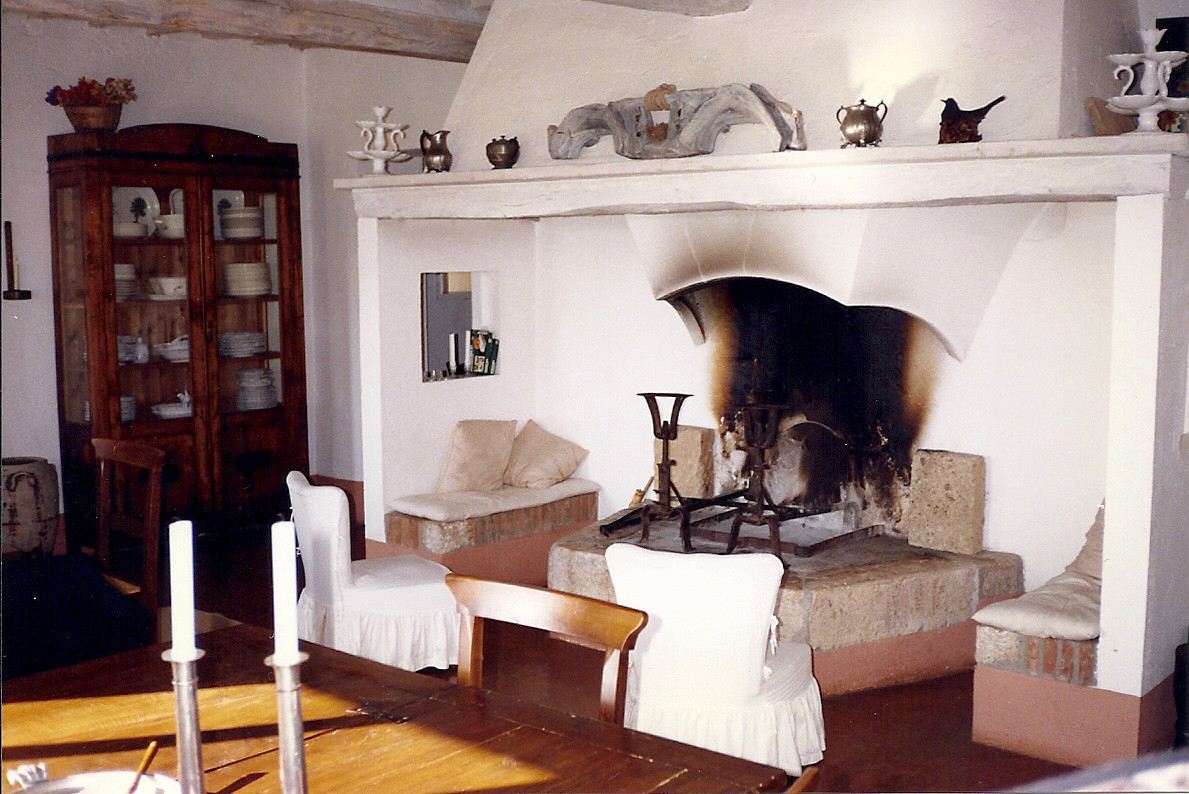 The dining room is the heart of this house and the most important room on the ground floor. To put it simply, we lived in this room. There were two small antique tables and chairs — enough to seat 8 to 12 people. We used them both for everything from writing letters to dining with the new friends we made. Much of the furniture in the house was chestnut, including the large china cabinet filled with dishes we were asked not to use as they were the good china with the family crest. 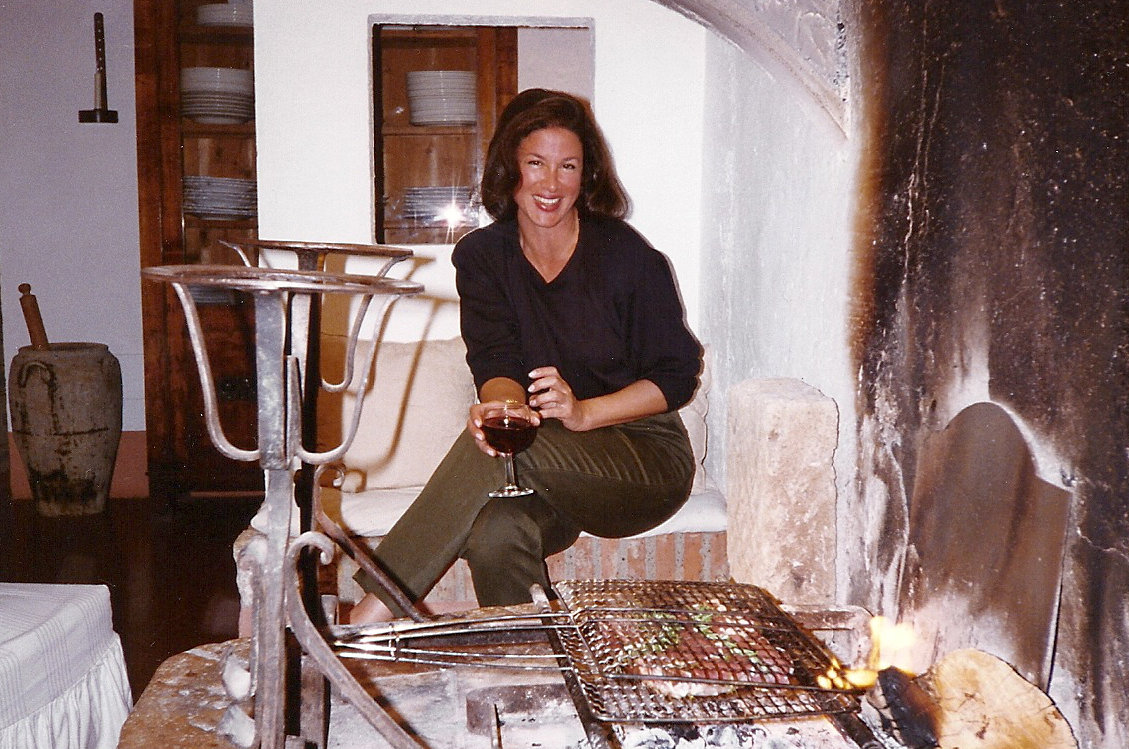 But the main and most important feature of this room was the camino, or open fireplace, flanked by what’s called an inglenook — two small banquettes. The fireplace had been set up for cooking and had no screen. Two low chairs sat in front — these as well as the tall andirons were very typical of Tuscan furnishings in this region. Done in this way, the fireplace seats four — imagine how much fun that is. While enjoying a glass of wine I’m also keeping my eye on two Tuscan rib eye steaks, tucked into the grill basket along with springs of rosemary, as they cook. In the camino, two rods sat across the andirons and supported the basket holding the steaks over the coals. The steel plate leaning against the back of the firebox reflects heat. We also enjoyed going to the enoteca (wine store) and having local table wine decanted from vats into empty bottles. 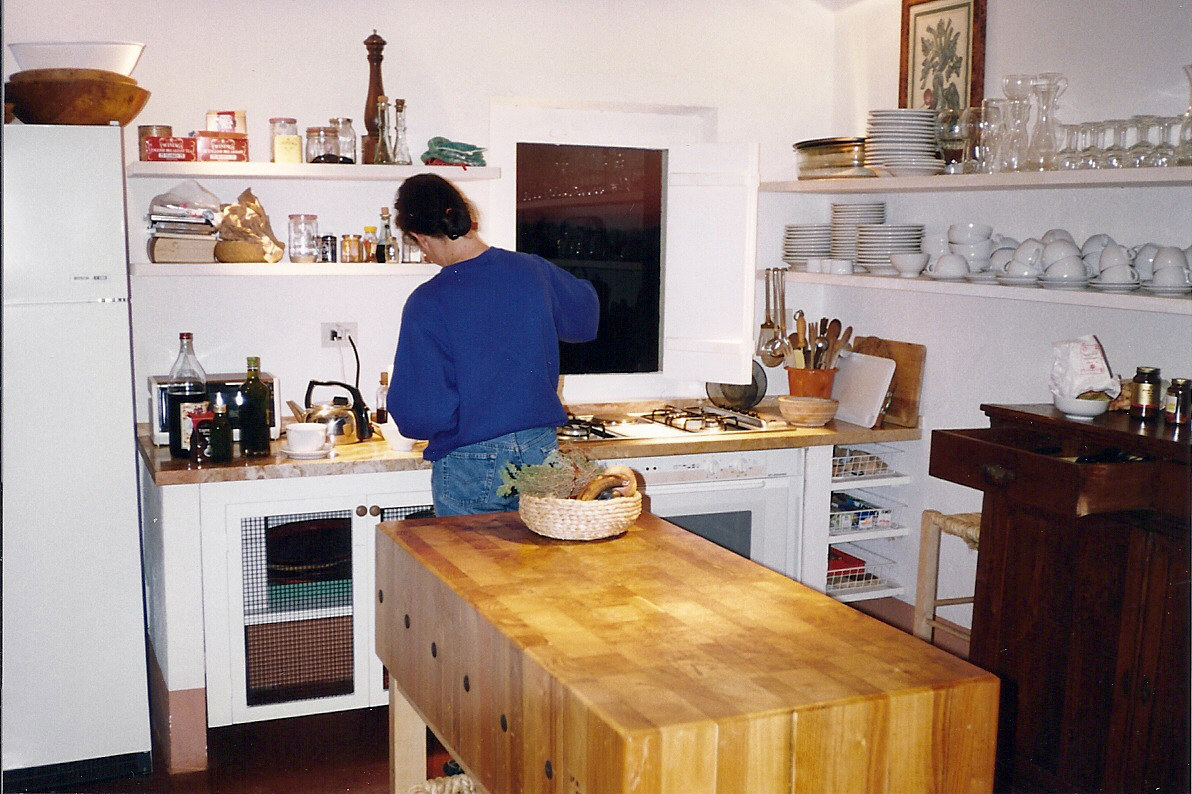 The kitchen was very simply done with wire-mesh doors enclosing the lower cabinets and a big butcher block in the center. The dishware was put out on open shelves. I really do feel that the design of this kitchen pushed me towards wanting open storage years later when I renovated my own kitchen. 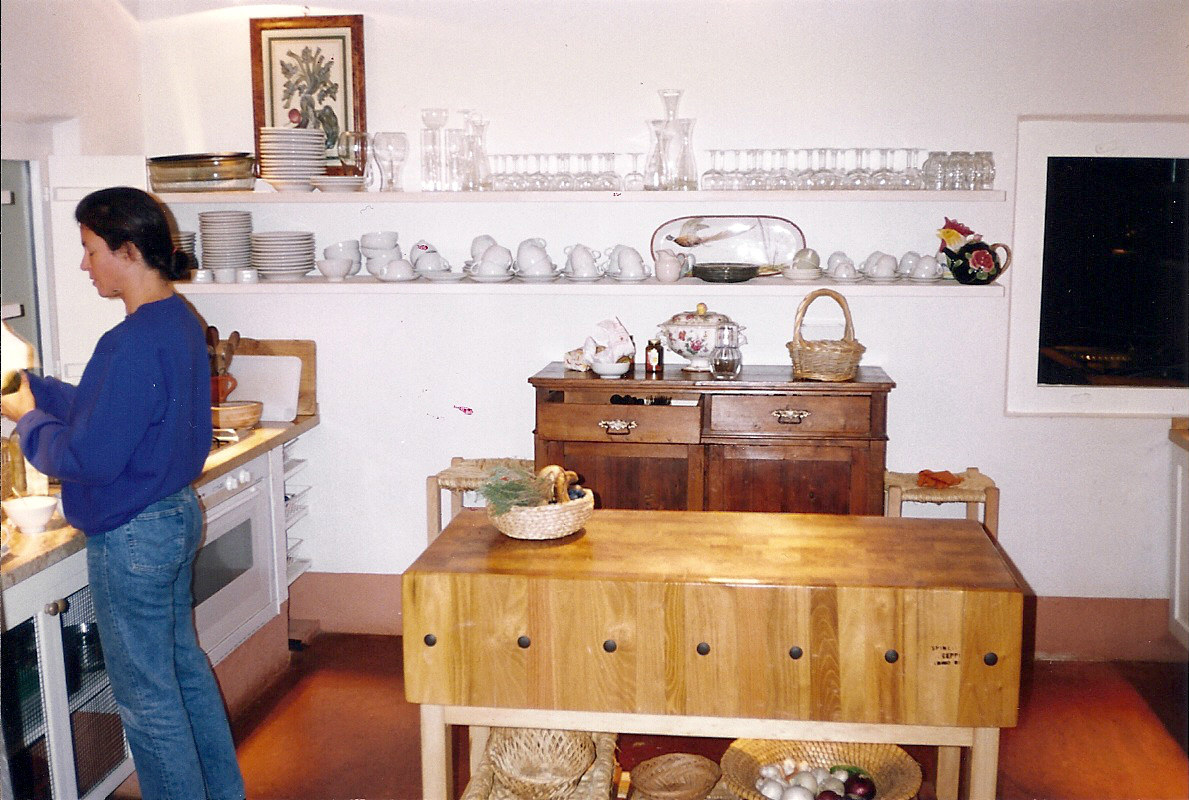 Virtually every house and every restaurant we visited had a piece of furniture like the cupboard behind the butcher block. Silverware is stored in the drawers and the cabinet on the bottom was used for platters and cookware.  As you can see, there’s a pot shelf below the butcher block where frequently used kitchen things were stashed. 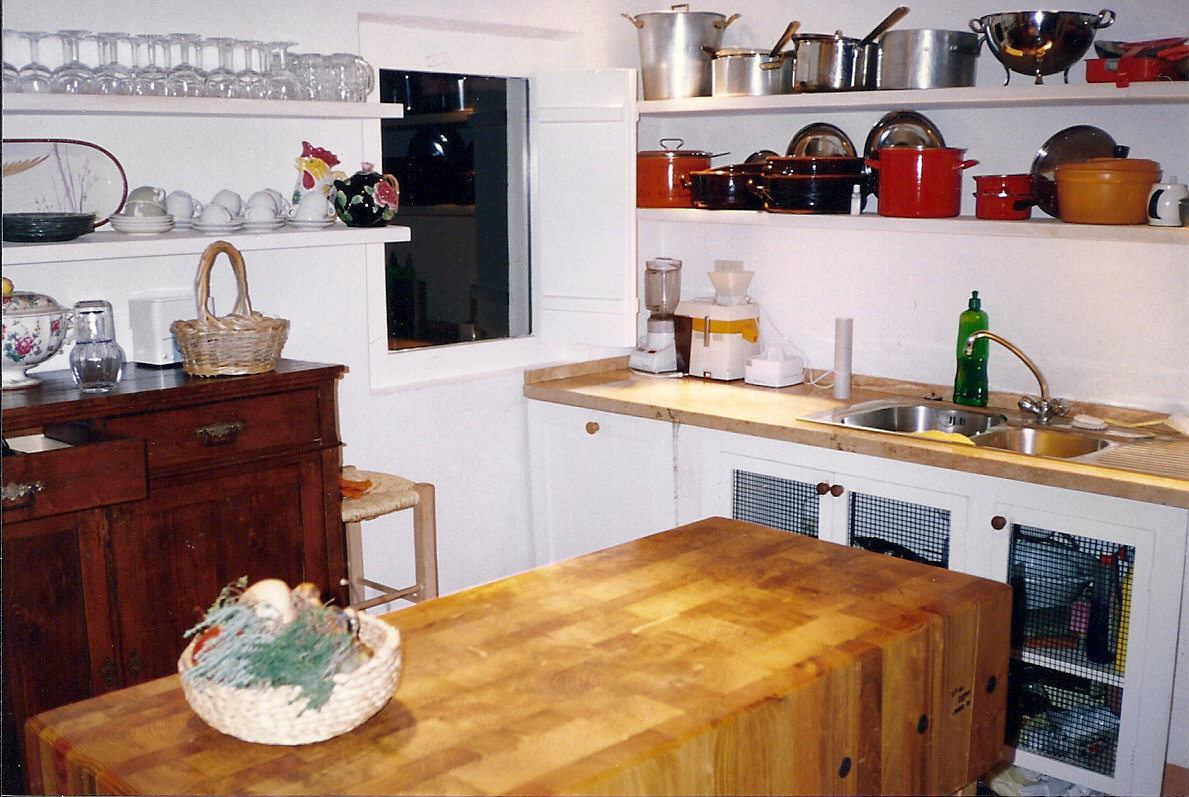 The sink is on a wall opposite the stove but it’s not a long walk. With open shelving above and mesh in the cabinet doors it’s easy to see where all the equipment is stored. 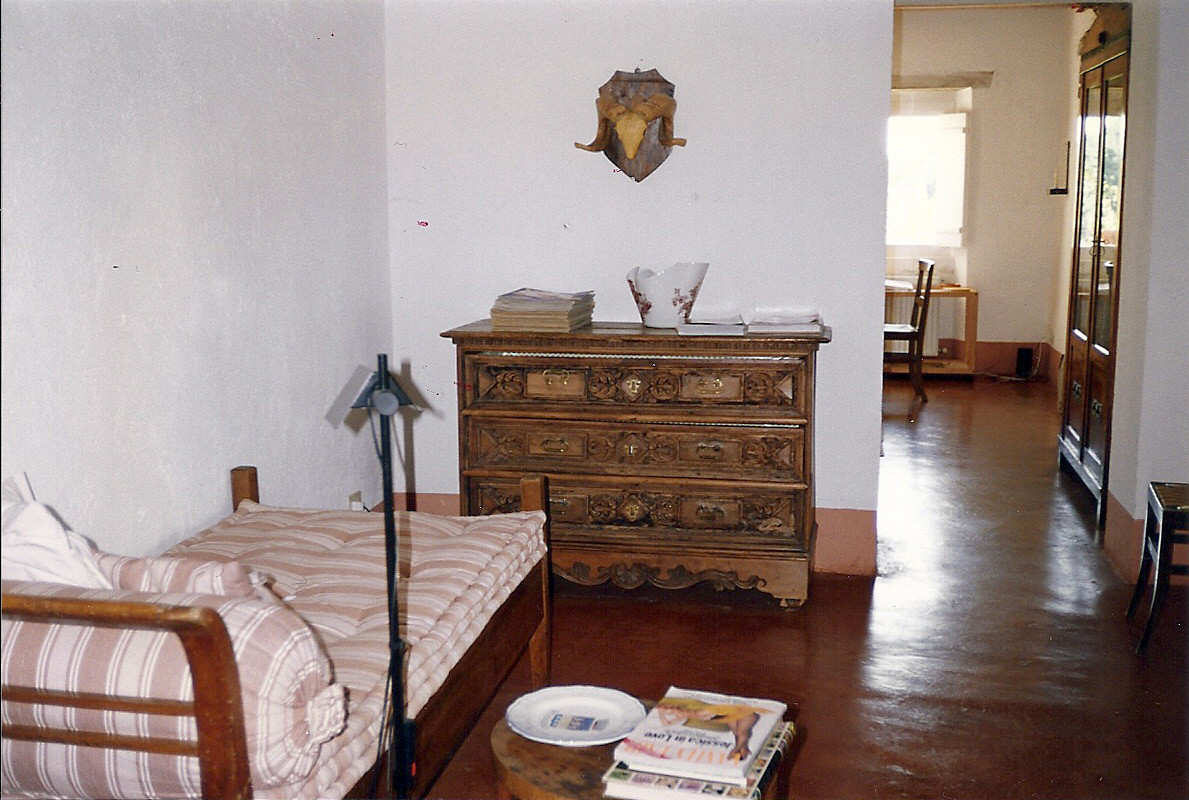 Adjacent to the dining room (notice the china cabinet on the right) was an odd space with French doors that led outside to the little one-bedroom guest house and to the L-shaped wing of the house with three additional bedrooms. The hallway was outfitted with a daybed that had a surprisingly comfortable French mattress and head roll. I often used it in the afternoons as a quiet spot to read. The pile of blue cushions for the outdoor table and chairs was stored here, too, since this door led to an outdoor seating area. A terra cotta oil jar took up another corner. 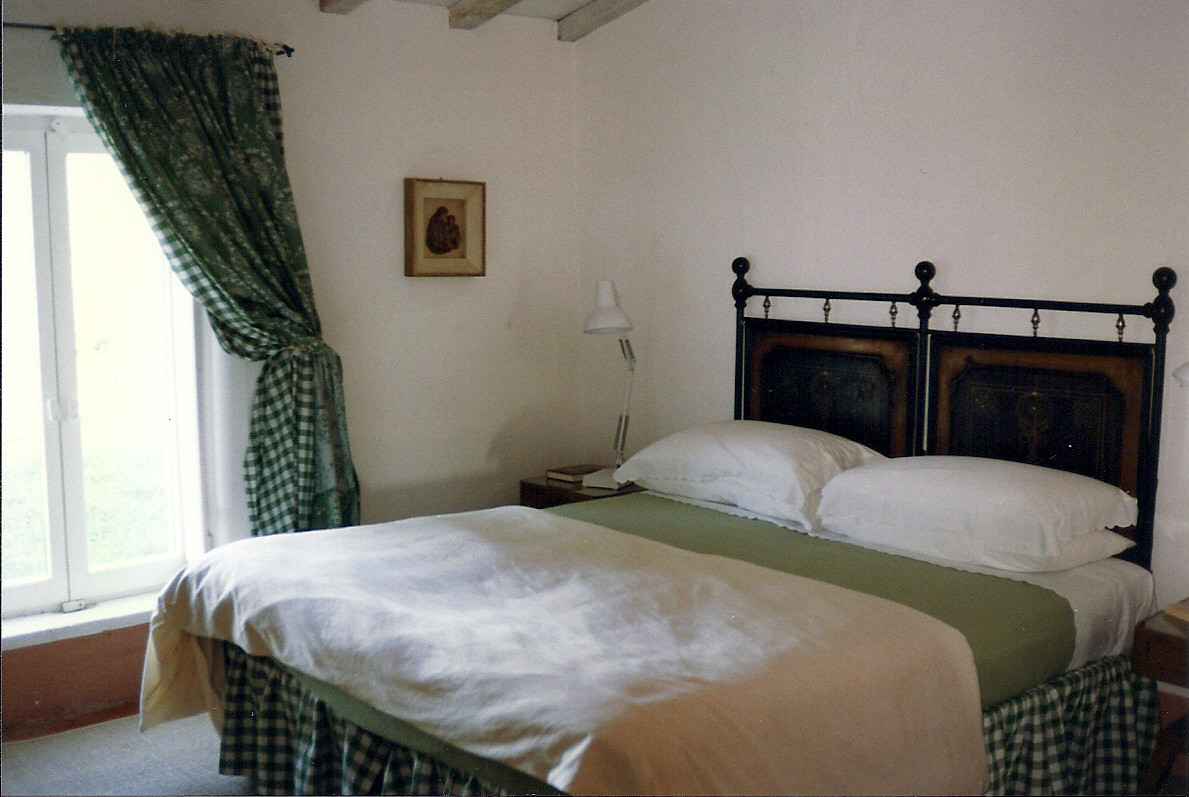 The wing in the back of the house seemed designed for guests. While the master bedroom is on the second floor, the guest rooms are on the first floor, with good access to the kitchen, dining room and outdoors. Decorated in the local style with an antique black-painted tole bed, the larger of the two bedrooms was done in green check. 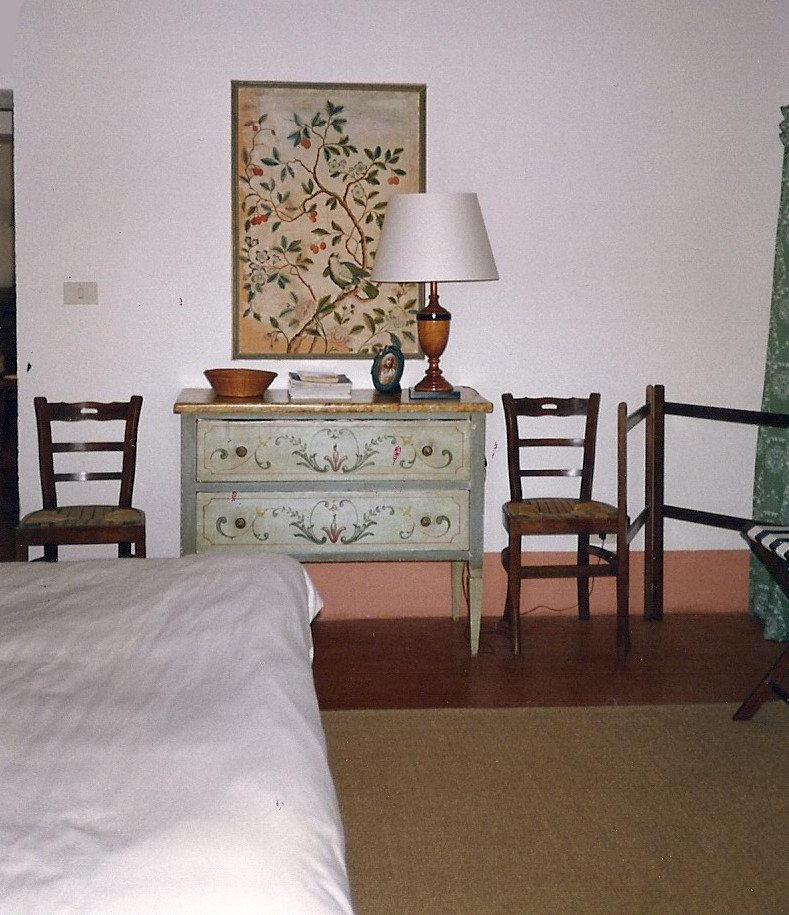 With an antiques markets nearby and flea markets on the weekends it’s easy to pick up wonderful old dressers and pictures in Tuscany. The dark, ladder-back chairs with rush seats are typical. It’s also interesting to note that the stucco walls are all painted white and that baseboards — which appear to be terracotta – are actually painted on. 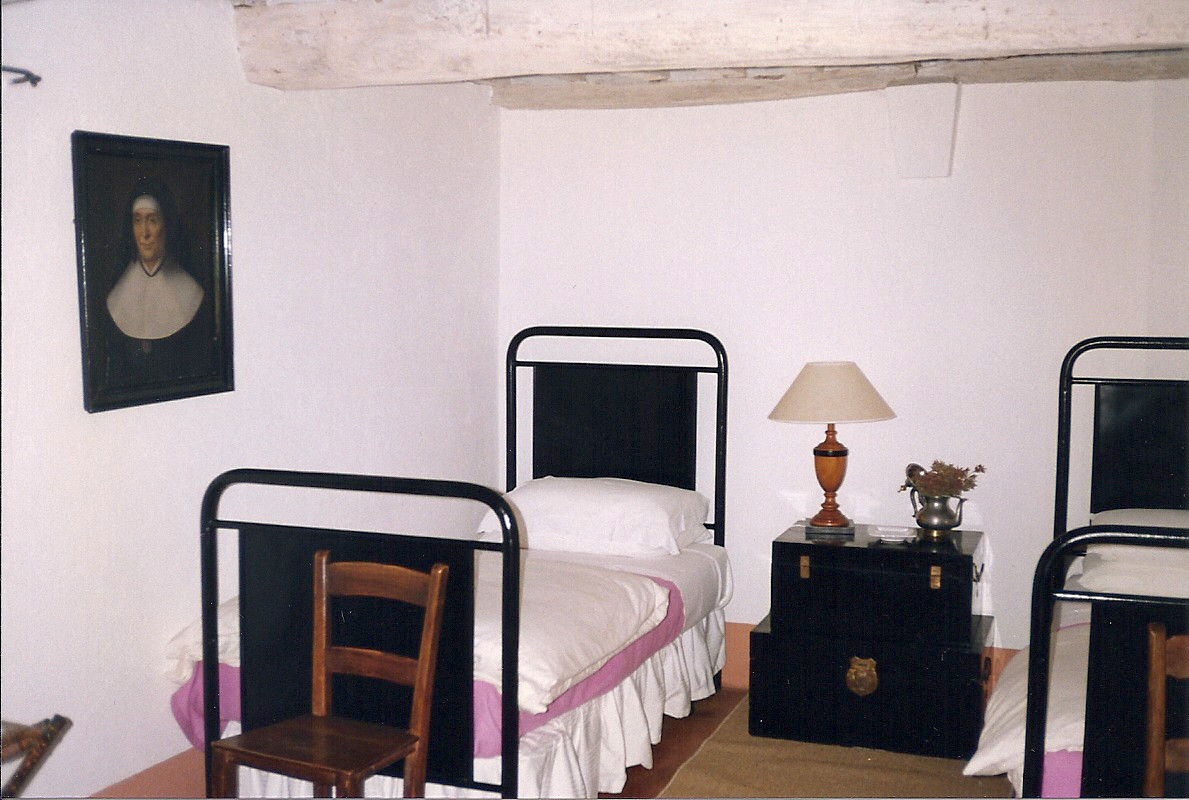 The smaller guest room has twin beds — also black-painted iron. And old painting fits in well with the color scheme but this bedroom always reminded me of boarding school for some reason. It was my least favorite room but one, if we had young guests, that would have been wonderfully useful.

But we’re not finished with the tour! Take the Tuscan Dream Villa II tour to go upstairs to the living room and to see the detached guest house.