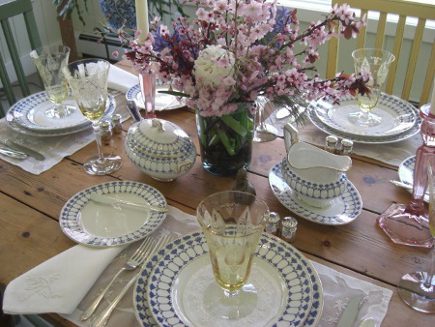 Five years ago I fell in love with dishes I saw online at an auction. Stacked and glittering, the lot featured more than 100 pieces plus a variety of serving plates that would take a lifetime to collect. It wasn’t a set – no cups or saucers — but I was lost the moment I saw the stylized blue cornflowers between thin gold bands. 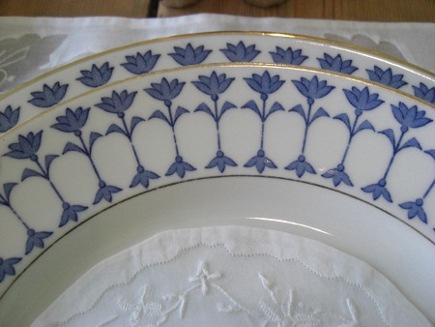 The dishes were from Rorstand, a little-known brand in the U.S. but one of Europe’s oldest, manufactured in Sweden since 1726. They were surprisingly affordable and I was able to snag them. My rationalization:  I needed at two dozen dinner plates for the buffets I planned to give when we finished renovating. 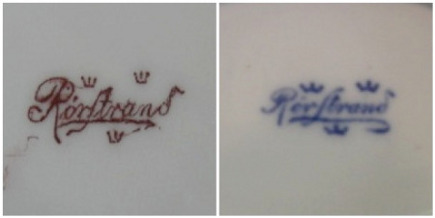 When the dishes arrived I realized that they were pieces of a fish and dessert service — probably used for Christmas and Easter. Stamps on the backs went from the oldest brown Rorstrand script, to the more modern blue hallmark. At the time, Rorstrand had a photos of their marks with the years they were used on the website. Sadly, it’s no longer there. Using the marks, I estimated they had been collected between the 1920s and 1960s. I wound up with 39 dinner plates — more than anyone needs.

My dear friend and blogging partner, Jane T. has been after me to show these off. They seemed perfect for a Spring table and I hope you all don’t mind the long story but I love a good puzzle, which these presented. 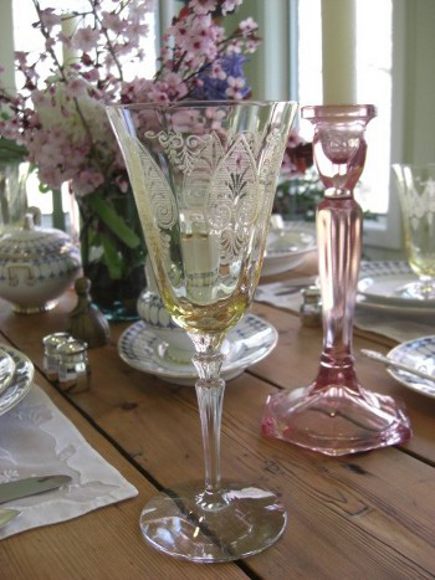 When I use the blue and white dishes I enjoy mixing it with Fostoria Trojan topaz (Depression) glass crystal we received as a wedding present from my sister-in-law. It was half her set of twelve purchased at a jewelry store in Clinton, Mass., when my in laws married in the 1920s. I would love to add some pieces and learned from comments on this post that I had never seen any from this pattern for sale because I had misidentified it! Behind it is an American colored-glass candlesticks from the late 19th century, which I collect. The pink pair work well with the plum and cherry blossoms in the vase (more on those in a minute). 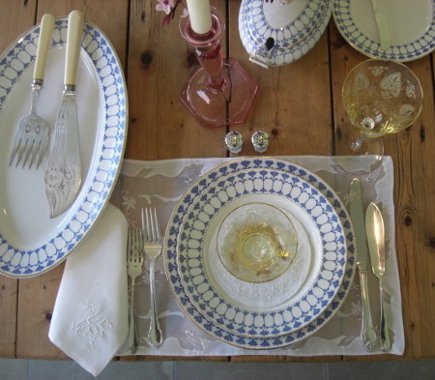 In a way, this place setting is like a map of my life. I acquired the embroidered voile placemats and napkins in Venice during the summer I spent studying Italian cooking there. The vintage fish knife and fork [far left and right on the mat] are from a set of six given to me as a birthday gift by a foodie friend.  The ivory-handled English fish serving set on the platter [left] came to us as a wedding gift. The knives and forks closest to the plate are Rodgers Bros.  Remembrance, from a silver-plate service for 12 I bought at a flea market near my house for $200.  I found the little sterling silver salt and pepper shakers, in Gump’s boxes, among my Mom’s things when we cleared out her house. They have tiny glass liners inside to prevent the spices from corroding the silver. 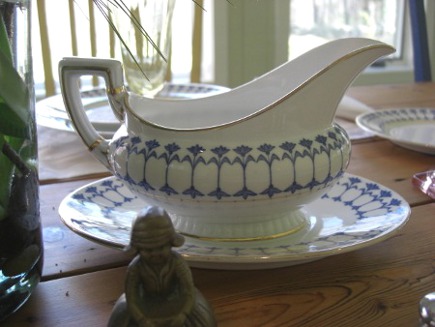 A pair of Rorstrand gravy boats come in handy at Thanksgiving — I love the graceful arc of the spout. The little lady in the cap [foreground] is a brass bell my Mom used at the table when we were small. It’s been somewhere in my kitchen  all my adult life. 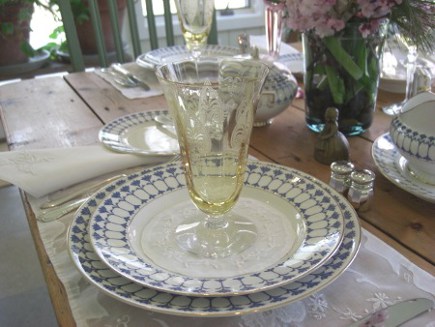 One of my mother-in-law’s parfait glasses seems so at home on a Venetian voile doily. I could see seviche or even a shrimp cocktail served in one of these, even though they are meant for dessert. I purchased the doilies in Venice at the same time as the mats. During the years I taught cooking I also entertained formally and frequently so I’ve always used them. I even enjoy ironing them. 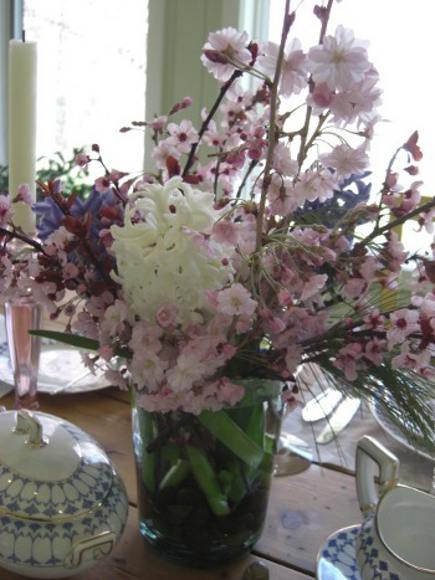 I don’t do elaborate flower arrangements but when things are blooming I love to bring them inside. The hyacinths sprouted right on time — I planted them last fall. Some of these pink branches were clipped from our flowering plum tree which was heavily damaged by a snows storm last month. It’s a miracle to see huge broken branches hanging on the ground and yet still blooming. No matter what happens, nature has a wondrous way of showing us how to be optimistic.