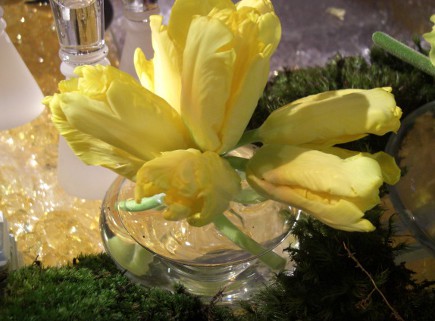 For Earth Day, a group of tablescapes inspired by nature.

Some 45 fantasy tablescapes were created by New York designers in March at the “Dining by Design” benefit for DIFFA (Design Industries Foundation Fighting Aids)  associated with the Architectural Digest Home Design show. Each was created by a different sponsor and no two were alike. Today is the fourth, and final, group — one  that shows how natural elements such as flowers, paper and textiles were used  — which seems a fitting way to honor Earth Day this year. 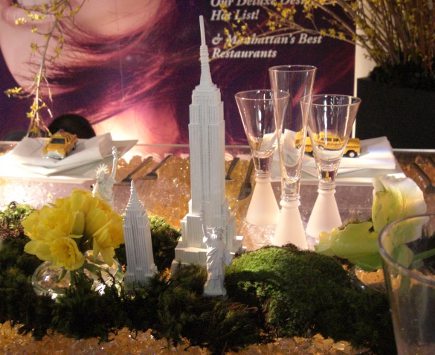 Designer Marc Wilson created a New York-theme table for Manhattan Magazine and what could be more appropriate than a mossy representation of Central Park in the center combined with statuettes of the Empire State building and Miss Liberty as well as bowls of bright yellow tulips [top] and orchids? Using low vases with flowers cut very short is a practical way to keep the center of the table open and visible. 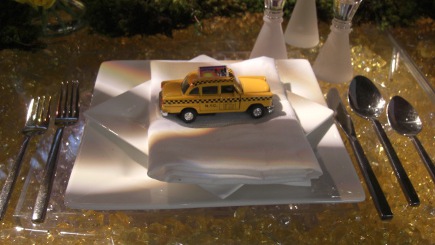 The lucite table was filled with jello-like chunks of yellow plexiglas and illuminated — no cloths required.  Continuing the yellow theme, a huge vase of forsythia filled a corner of the booth with blazing color. 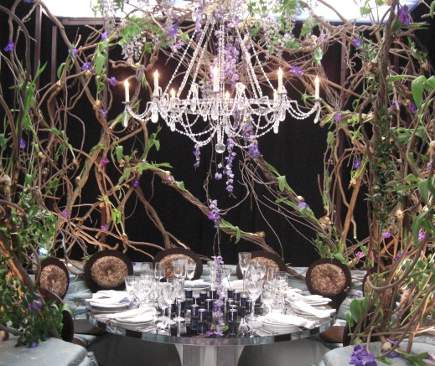 Several tables featured upholstered booths instead of chairs and this was one of the most interesting. Blooming vines, trailing down around the edges of the seating area, were illuminated by natural light as well as a crystal chandelier of impressive proportions. The combination of the chandelier and vines produced a fascinating indoor-outdoor statement. 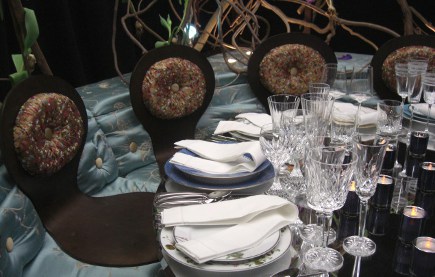 Dark wood seats — like the tops of chairs with upholstered backs — were placed on the banquette to help define each place. 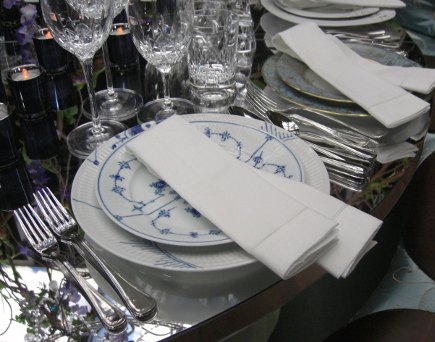 The table was lavishly set with blue and white china — each place had a different pattern (here Royal Copenhagen) as well as a battery of cutlery and glassware. 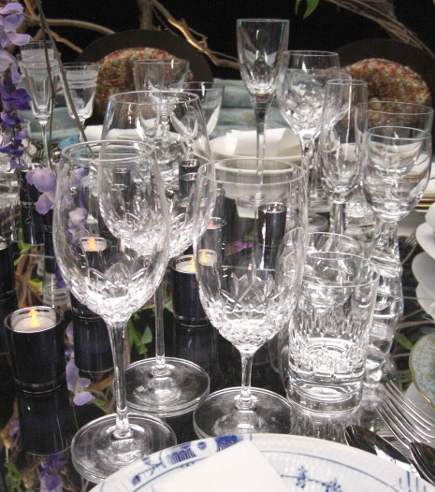 Who knows what menu the designer had in mind but, given the number of goblets on this table, he seemed to be very serious about serving his wine! 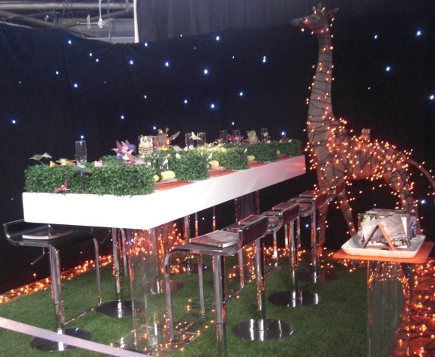 A table by the author of a book entitled “Party Like a Rock Star,” featured a copy of the tome on each seat — great as boosters for a table  set up like a communal browsing bar. High stools with low backs provided perching spots for diners. The table was divided into places by green shrubbery arranged like a formal garden on the white tabletop. That’s a huge giraffe back in the corner. 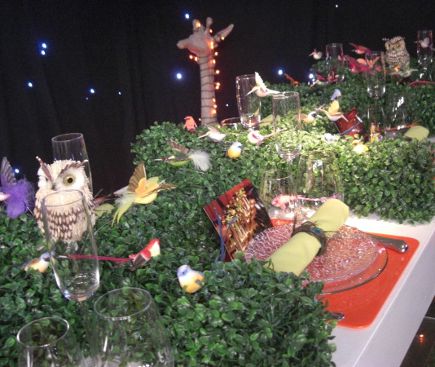 Trendy orange placemats were remarkably effective amidst all the green and there was a definite Facebook quality to the settings, which included a photograph of friends propped up in front of the plates. 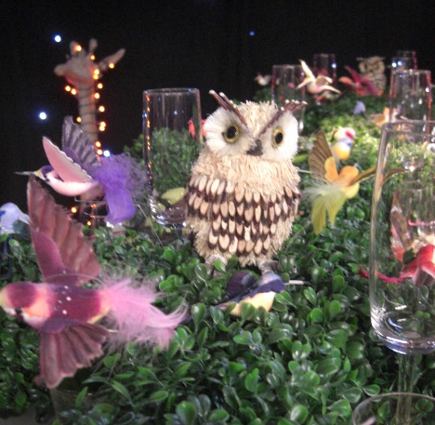 Cute critters nested in the shrubbery all over the table, which definitely had a out-all-night vibe. 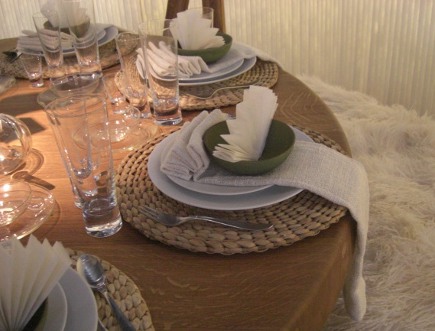 Rustic wood and natural fibers were emphasized by this table which was surrounded by a half-circle of pleated white parchmentlike paper, illuminated from behind — as if a shoji screen had been envisioned by Fortuny. Placemats are braided sisal and an origami-like paper fan adorned each bowl. 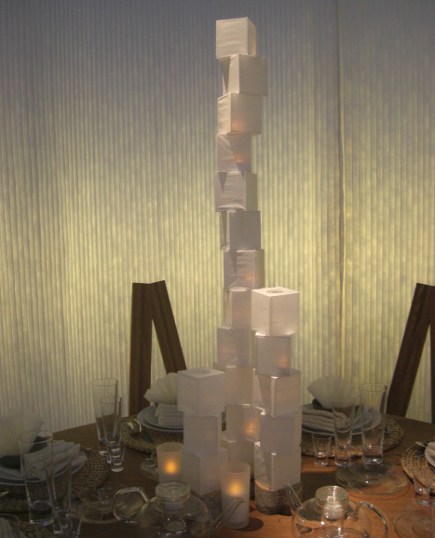 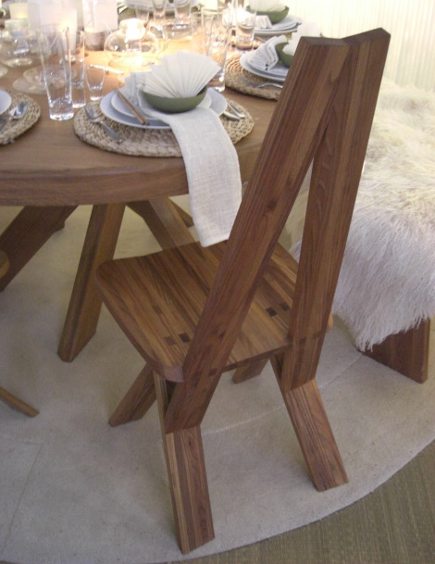 The rustic, exotic wood table and chairs, in addition to a shearling-covered bench, were placed on a delicate, circular fiber “carpet.” 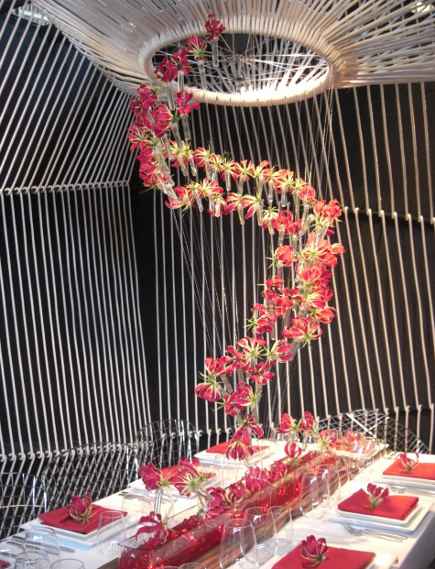 This isn’t some demented spider web — honestly. Architect Arpad Baksa created an visual pun by constructing trussed rope walls around this table. Iconic Harry Bertoia side chairs are the hint. A red orchid centerpiece hangs down from the center of the rope truss like a double DNA helix — it’s a stunning effect and a visual twist of color that drew me from across the room. 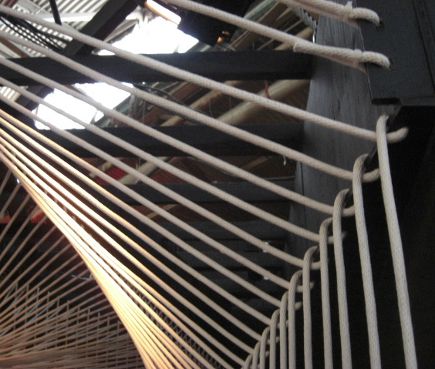 I took a close up of the rope trusses because I thought it was a fascinating (not to mention difficult) way to create a room environment. They were strung through holes in wood strips that had been painted black so they completely disappeared. I’m always fascinated by how things are built and go together. school. 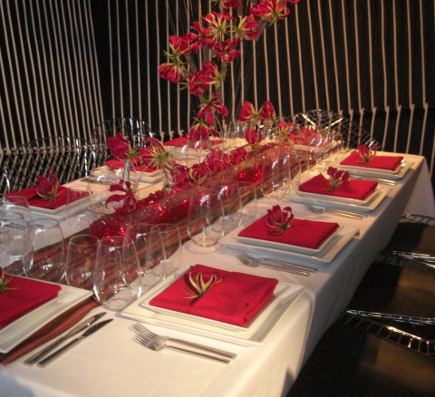 Baksa’s place settings each featured a red orchid tucked into a napkin. He also used Riedel’s O glasses. The perfectly symmetrical table for ten might have seemed ho hum without the amazing rope walls and hanging garden overhead.