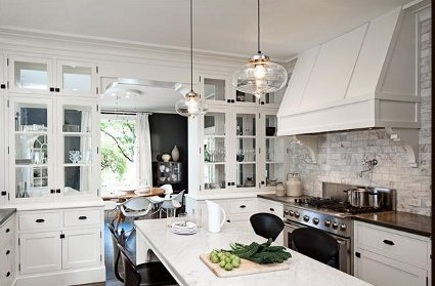 Recently I found a variation for black-and-white kitchens– which by definition have white cabinets and black counters. That involves marble subway tiles. Designers are always looking for ways to personalize kitchens, particularly the two standby classics: all white and black-and-white kitchens. Back in January I wrote that all-white had become formulaic. Two designers working at opposite ends of the U.S. have moved them forward by swapping Carrara marble subway tile for default glazed white subways. 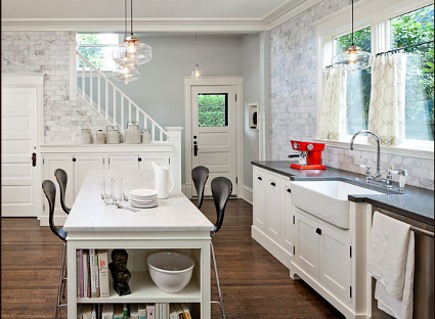 In Portland, Oregon designer Jessica Helgerson renovated a 100-year-old house [top and above ] for a young family who wanted to modernize. Tiling walls –not just the back splash — with Carrara subways adds a slick texture as well as characteristic mottled grays to the walls. Although the Barber Wilson’s gooseneck faucet says “traditional” the mid-century-style pendants, open pattern of the curtains and modernist black chairs help update and individualize the look. 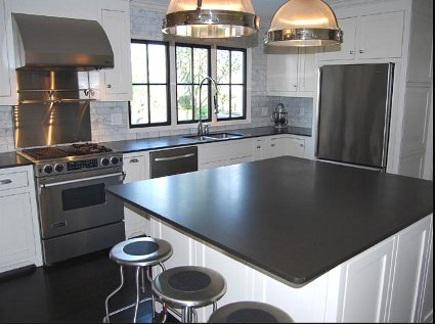 The similarity of Helgerson’s kitchen and designer Ty Larkins’ marbelized beauty in Baton Rouge is striking.  The common element is the tile used in a similar way — from the top of the counter to the ceiling.  I call this a “Eurosplash” as it is often seen in English and American kitchens of the early 20th Century. 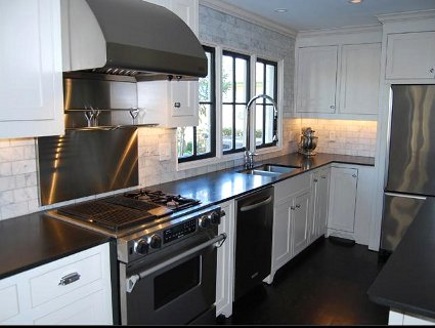 Even with the marble detour, Larkins’ kitchen tilts to the default pro-style with the Viking range, back guard and hood in addition to the now trendy pre-rinse faucet at the sink. Art Deco diner stools and the style of cargo lighting popularized by Urban Archaeology (via Martha Stewart) make Larkins’ kitchen a bit more conservative than Helgerson’s but no less lovely.