You are here: Home / Decor / Color / One Hallway, 2 Color Effects 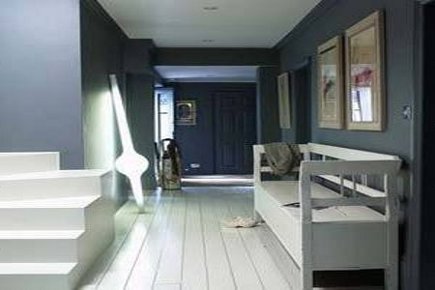 One of the best examples of how different color effects look in the same exact space is perfectly captured by these photos of a hallway in a Victorian house in London. For me, it’s a study of how color can affect a floor and a stairwell.

The house belongs to Joa Studholme, color consultant to Farrow & Ball paints, which were used for the project. The floor and stairs in both photos is F&B Slipper Satin, a blush-y white recommended for use with strong colors, which here almost appears to be lit from below. “We installed the light-painted staircase to slot a contemporary element into dark Victorian architecture,”  Ms. Studholme told an interviewer. 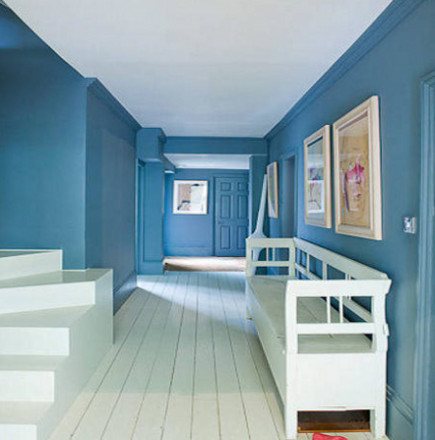 The hallway is painted in Downpipe — essentially the color of steel. However, the  lighter variation is not a variation at all — it’s a photograph of the hallway that appears to be a different color. It is not! Originally, we thought it might be one of the F&B blues — until Joa herself weighed in: ” Never trust photography of colour,” she said in her comment, below.

So ironically, the darker hallway appears to be the more dramatic of the two because it offers a higher contrast with the floor, it also looks shorter and narrower because the walls advance visually.  In contrast, the distorted blue hallway looks longer, wider and shows more detail.

The few furnishings in the hall also coordinate with the wall and floor color. However, Joa noted in a later email that the bench — Slipper Satin in the top photo — “has been Rectory Red, Arsenic and Charlottes Locks since!”