You are here: Home / Houses / Our Houses / Alabama Stone Cottage 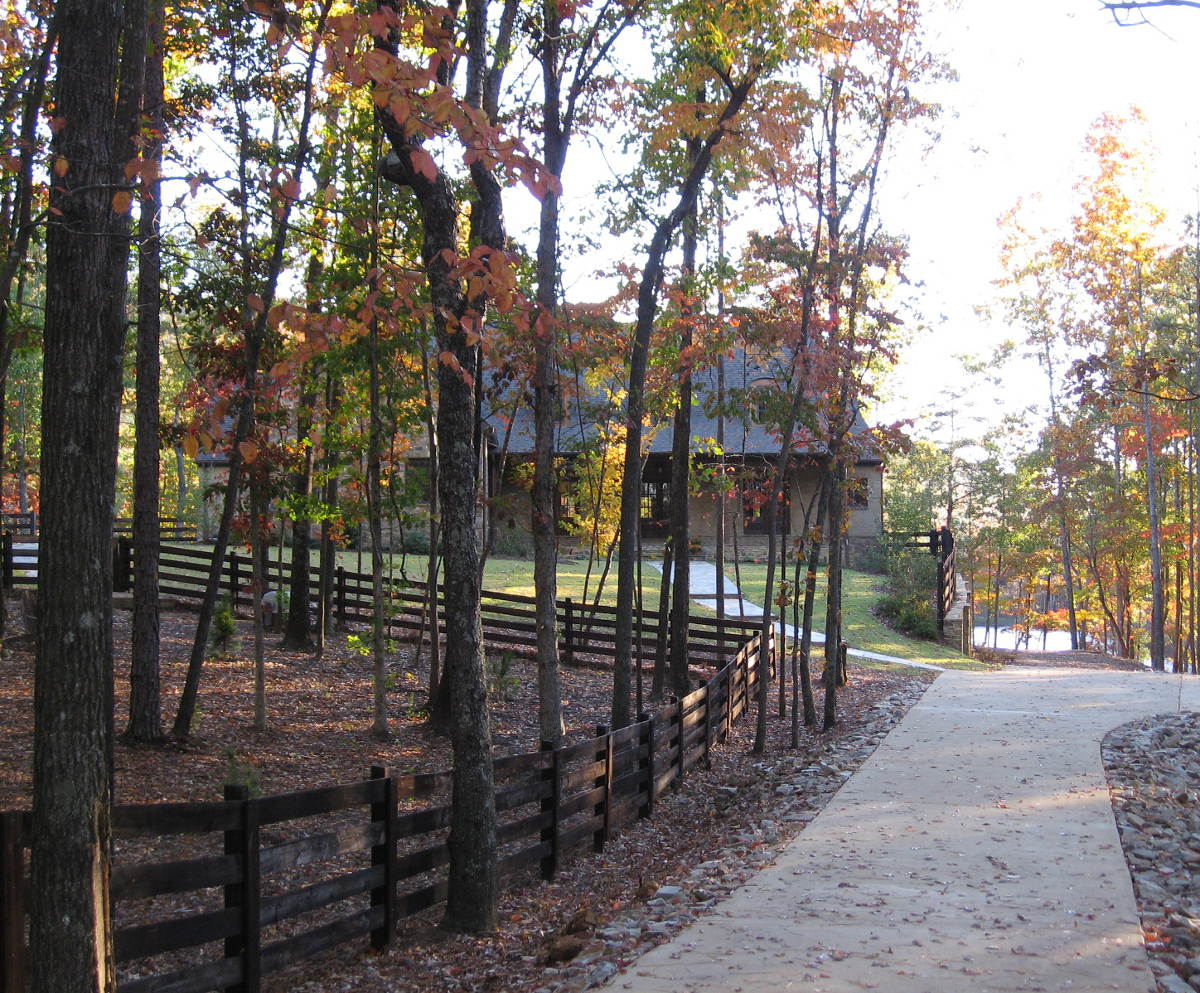 Calling a five bedroom four-and-a-half bathroom home sitting on 4-1/2 acres an Alabama stone cottage is a way of describing the style of the house our Allison and her husband lovingly built on an Alabama lakefront lot.

Designed by Tulsa architect Jack Arnold – who the couple has never actually met – the house was three years in the planning. “I saw a house he’d done in a magazine years ago but never dreamed we would have a house designed by him,” Allison explains. “We sent off for his information and came up with a floor plan that would work with our lot. We tweaked the plan for a year on and off making interior changes. We wanted views of the lake across the whole back of the house.”

The house looks as deceptively small as a cottage from the front. “You don’t ever see the whole house from the front or the back. When you come in, you aren’t expecting it,” Allison notes. She likes that element of surprise. 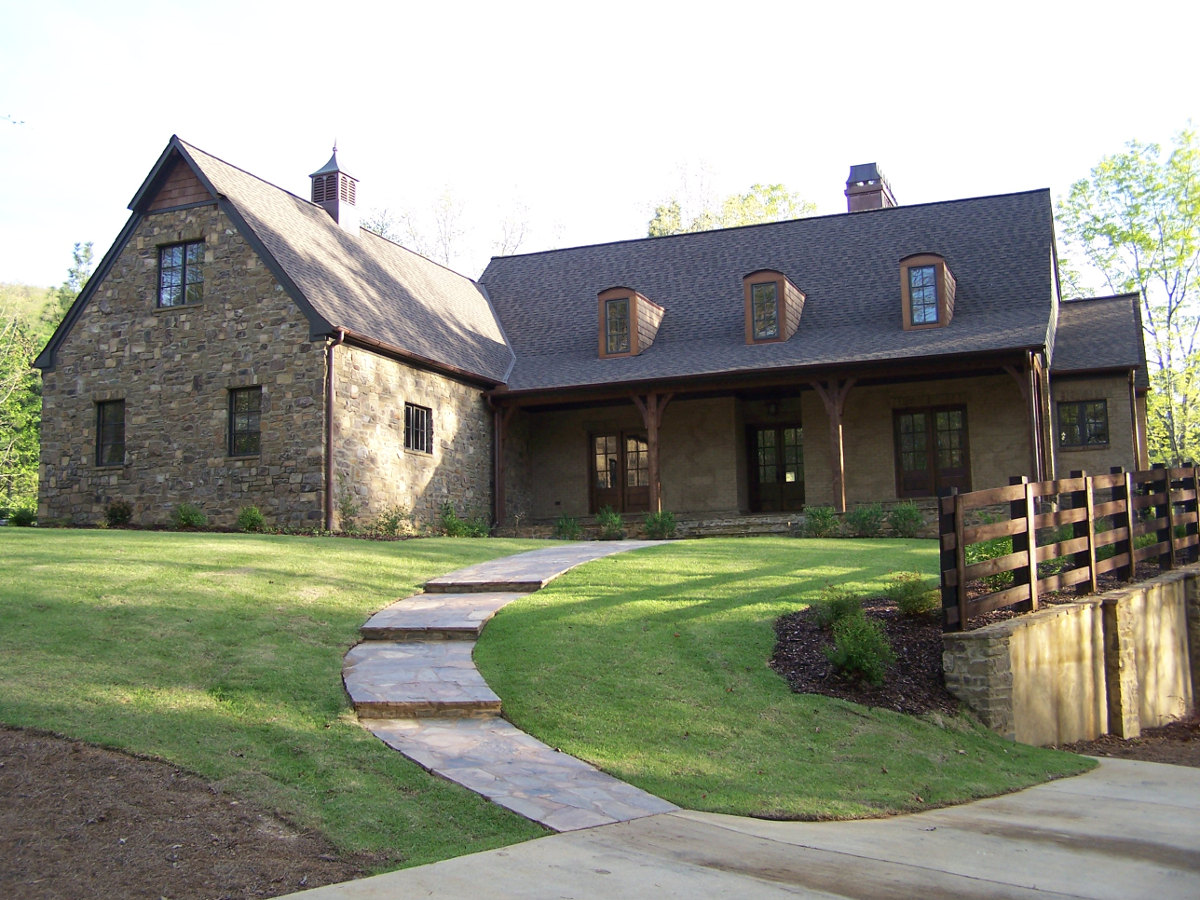 A local custom builder stick-built the house [see the garage, in progress, below], which is finished with a mix of three local stones. “We wanted low maintenance outside,” Allison says. 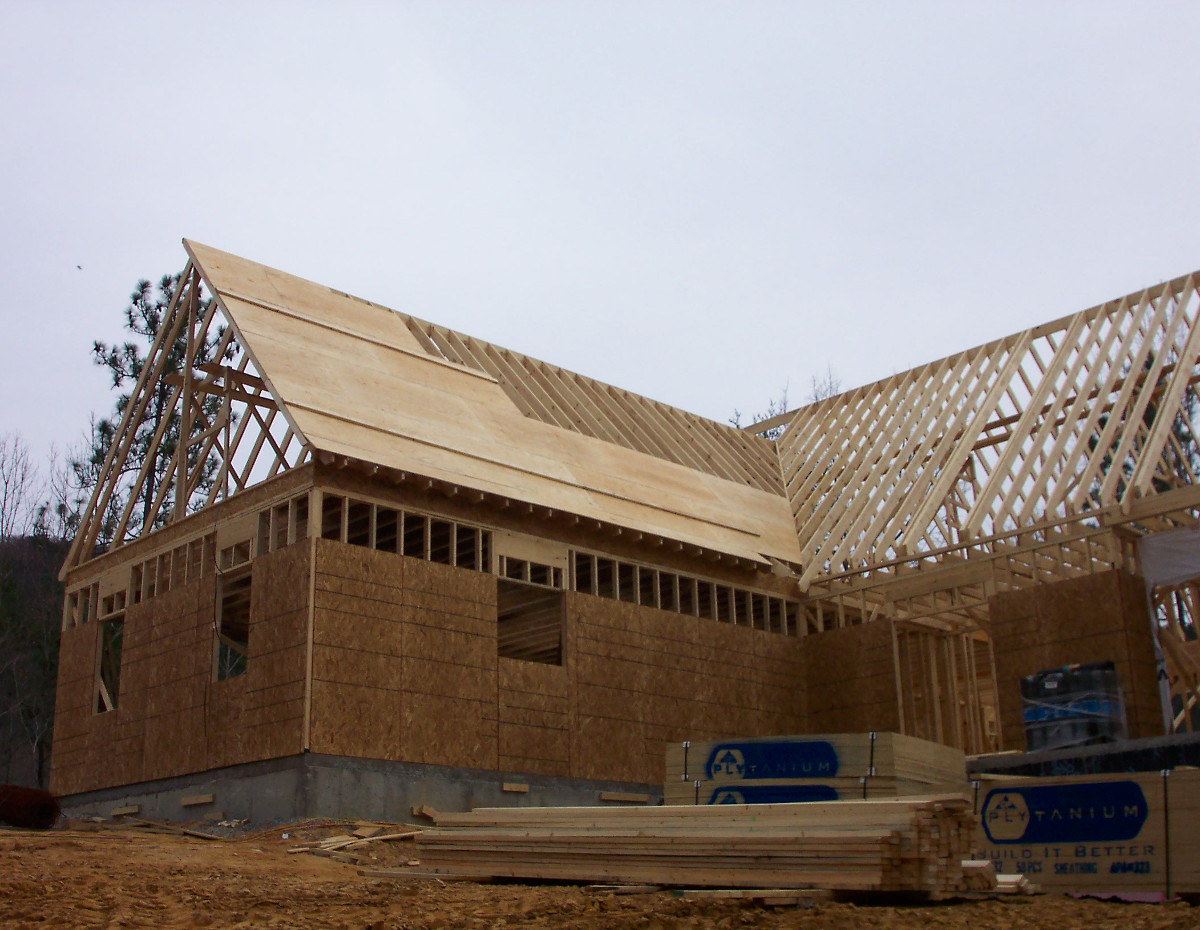 While the 3-car garage appears to have a room above it, this one does not. The couple eliminated that. The garage connects to the house via a short hallway that opens into the back of the kitchen. 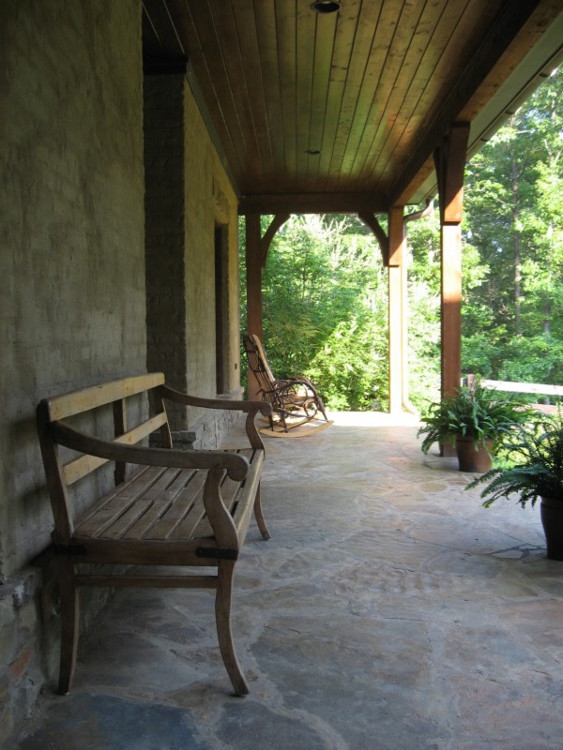 The front veranda above one of three overhanging porches that help keep the house cool. The main entry is to the right of the Mexican-made bench Allison found at a local shop. The bentwood rockers were purchased from an Amish wood worker on eBay. 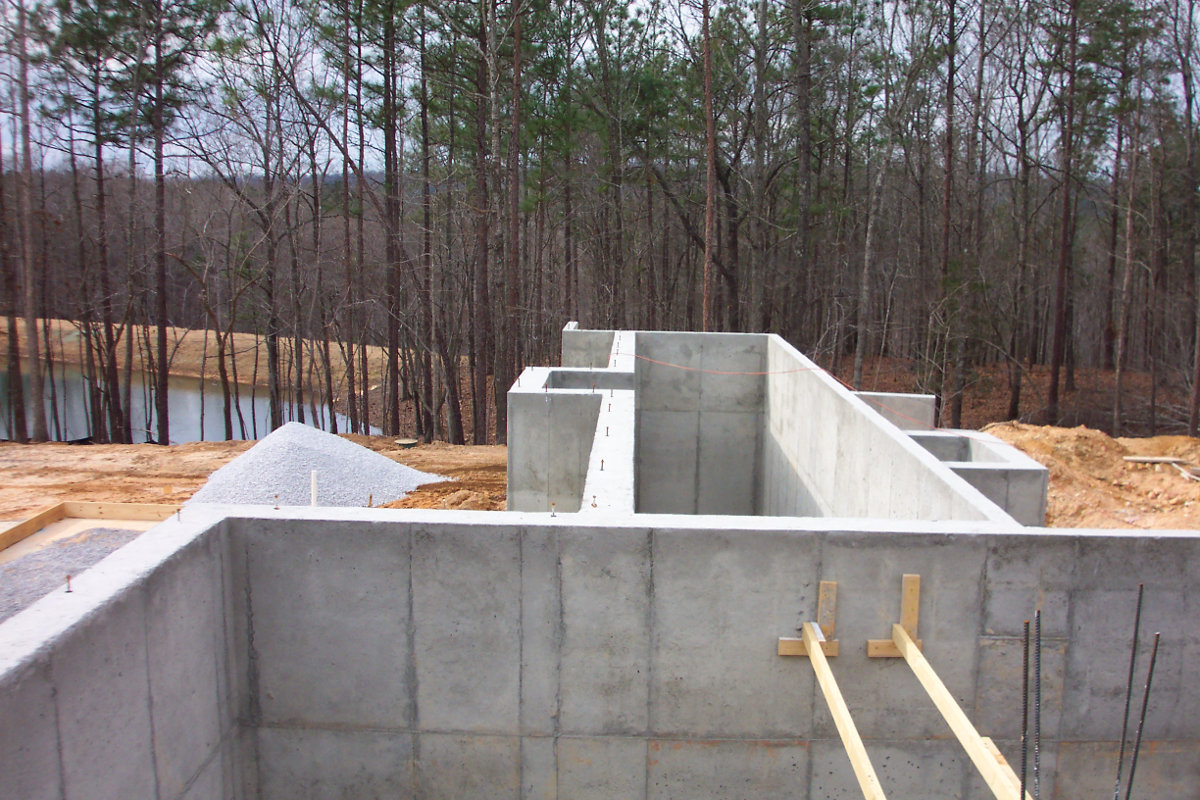 Here’s the foundation for the front veranda area. Because the house is on two levels, Allison wanted the foundation to be extra tall — 12 feet vs the usual 10 feet — to keep an airy feeling in the lower level rooms. That strategy paid off. 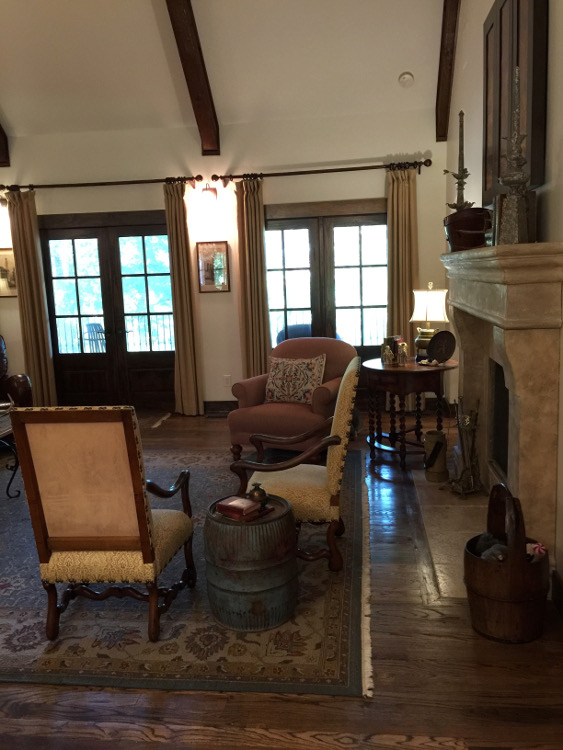 The front door opens into a foyer and beyond is the great room, which forms the heart of the house and has three sets of French doors [left of the photo, not in view] along one side affording light and lake views along the entire length. Local artisans crafted a wood and copper sliding screen that conceals the TV over the fireplace. The media closet, to the right of the fireplace, has a door fashioned from a wood and metal shutter by the same woodworkers. The entry to the master bedroom is to the left of the fireplace. Chair cushion is an Uzbek suzani purchased from a Tashkent textile dealer Allison found online. 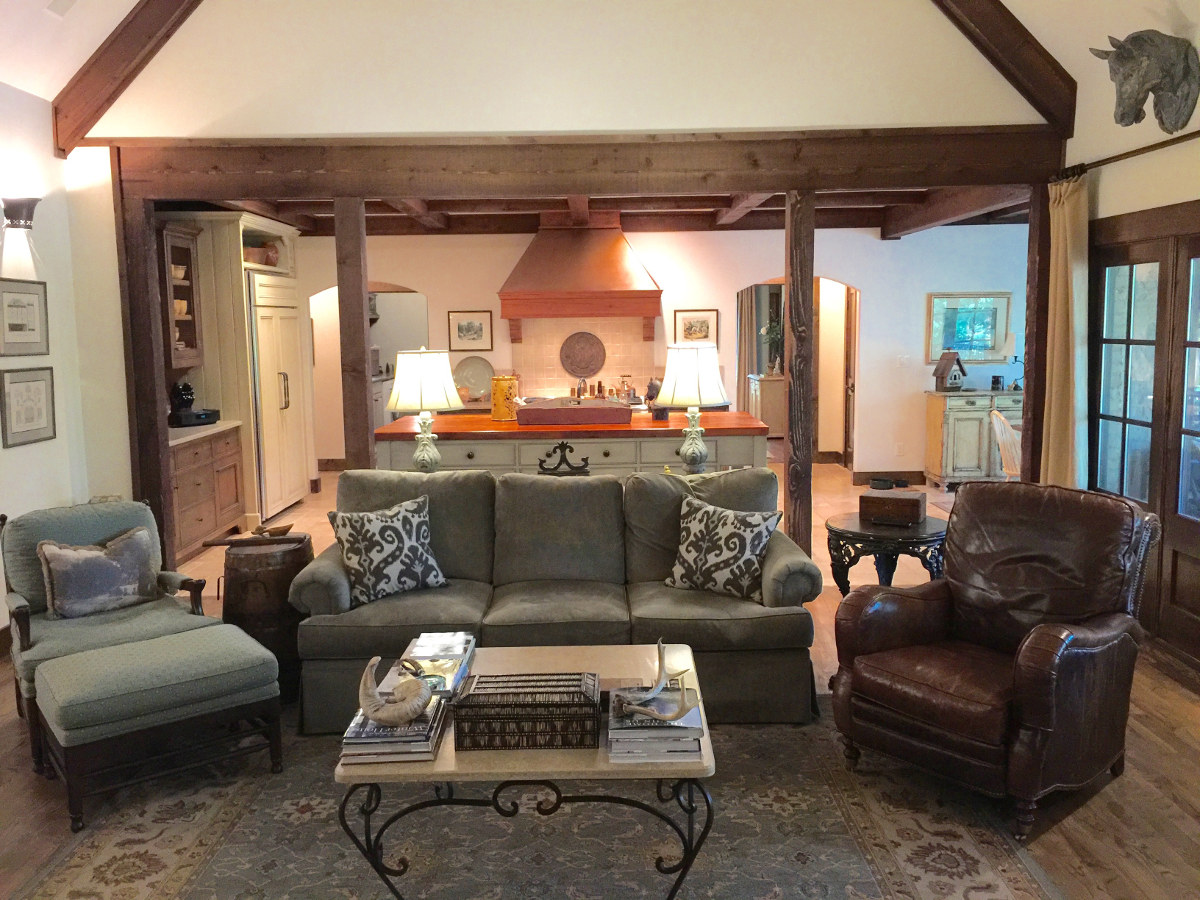 Here at Atticmag, we have long had a tour of Allison’s beautiful French Gray Island Kitchen.  The kitchen opens onto the back of the great room, for which Allison purchased a modern soumak rug with pale blue ground. The taupe colors in the rug coordinate with the fabric on the Henredon sofa and also with the Sherrill leather recliner which is her husband’s TV chair.  Above the door [top right] is a French zinc butchershop horse head Allison found on a trip to San Francisco. 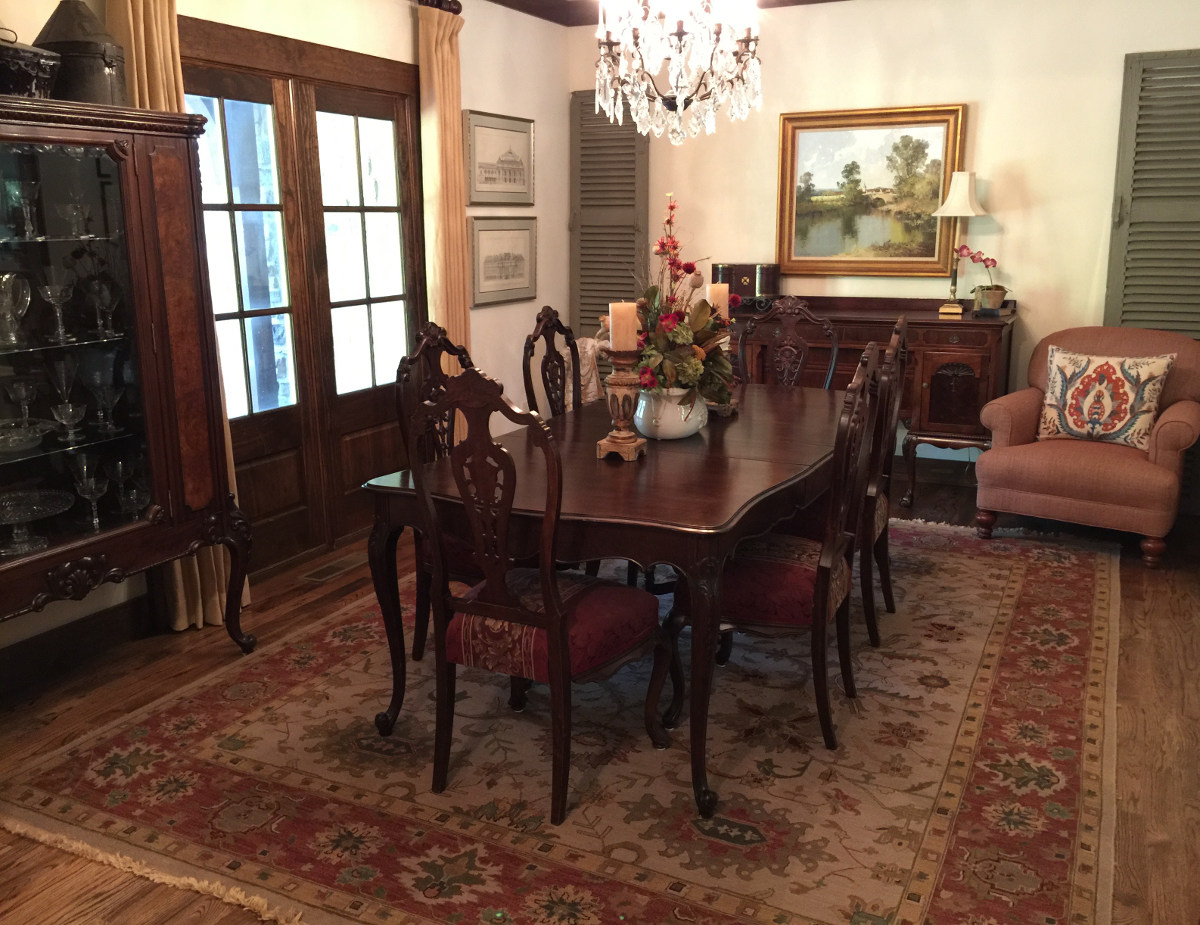 The formal dining room has antique walnut furniture, a Kalaty soumak rug, and a vitrine loaded with Allison’s grandmother’s crystal. Allison found the dining room’s German grandfather clock [below] the day after Christmas at an antique dealer moving to a new location and bought it for a song. Doesn’t every shopping editor love a bargain? 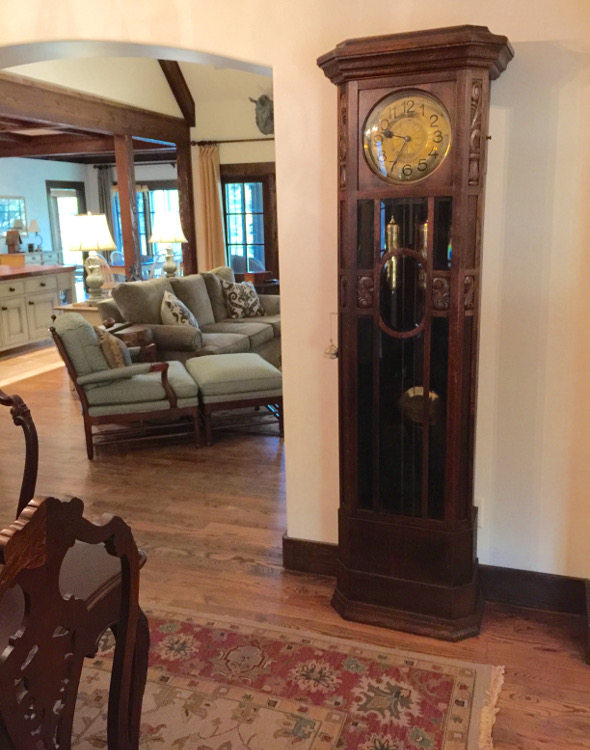 From the entrance to the dining room you can see across the great room and into the kitchen, which has a coffered beam ceiling that extends into the breakfast room [below]. 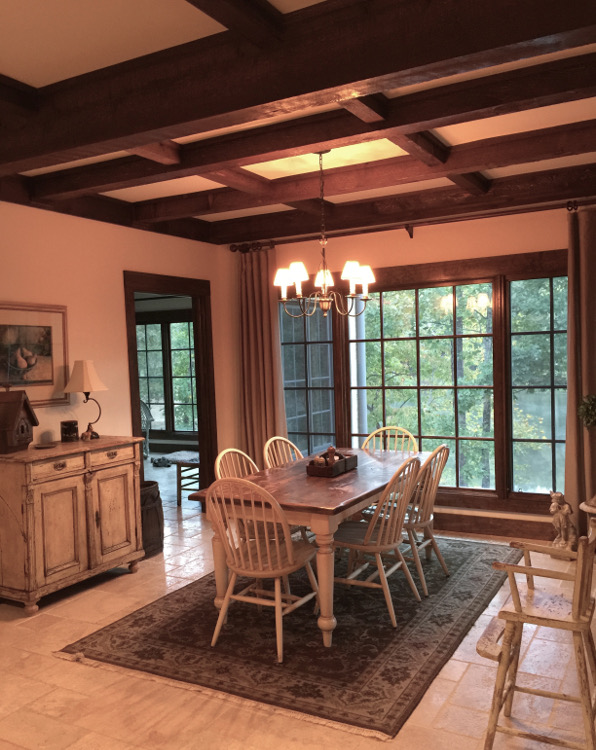 Stone flooring throughout the house helps reflect light from the lake. For the breakfast room, Allison asked the artisans who made her fireplace screen and shutter-door to repurpose an old table, distressing it and replacing the original maple top with one made of reclaimed wood.  The breakfast room chandelier, like most of the lighting fixtures in the house, is from Hubbardton Forge in Vermont. 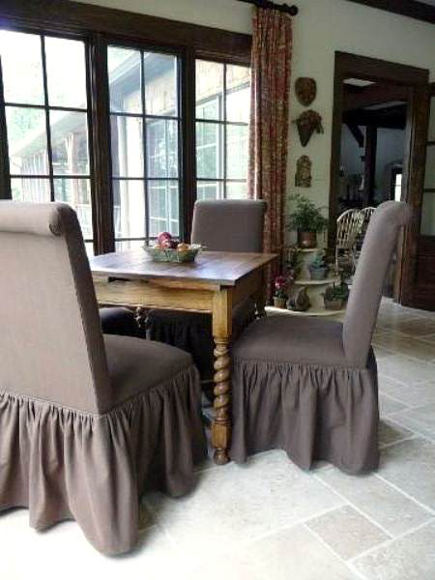 Allison says, “I spend a lot of time in the sunroom.  “The dogs and cats like to sleep in the sun as it has three walls of large windows.  The room has fabulous views of the mountain ridge and the water on three sides.”  An old table that has been used in several different rooms over the years landed here and Allison recently added new, skirted chairs. 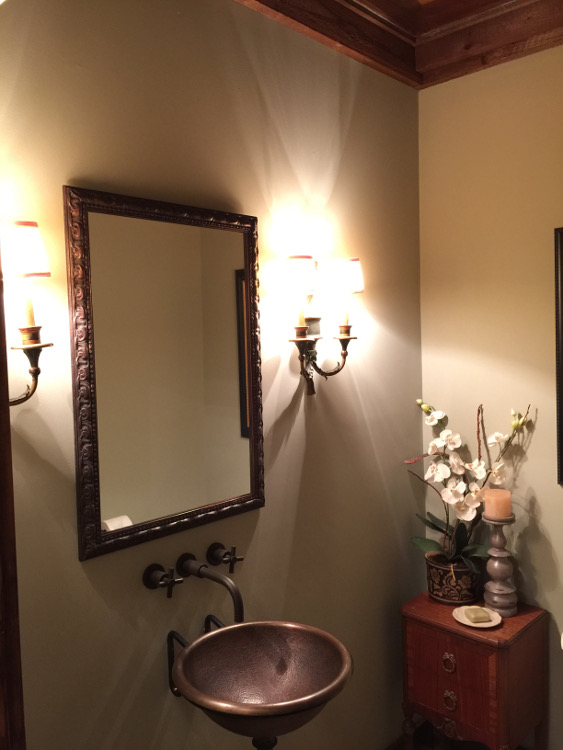 The powder room features a copper lavabo from Stone Forest paired with an oil-rubbed bronze Newport Brass wall-mounted faucet. The small chest belonged to Allison’s grandmother and the antique sconce is one of four Allison brought with her from her previous home. The mirror was made by a local framer with a copper-kissed frame that coordinates with the washbowl. 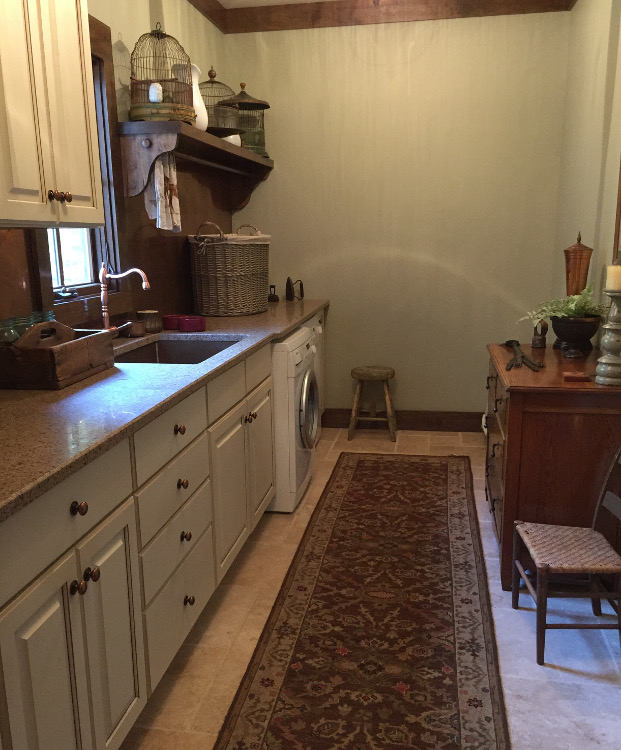 “I wanted a pretty laundry room because I had a basement laundry area for 23 years,” Allison says. To enlarge it, she stole space that had been allotted to a closet in an adjacent room. Her cabinets house “a lot of dog and cat supplies” — the couple has 3 dogs and 2 cats (who sometimes work their way into photos). While English-made cabinets were used in the kitchen, these were made by Jim Bishop in Montgomery, Ala. The sink (another internet purchase) and back panels are copper; counters are  honed golden leaf granite.

Copy and paste link to quick-share this post:  http://bit.ly/Iv9Rqs