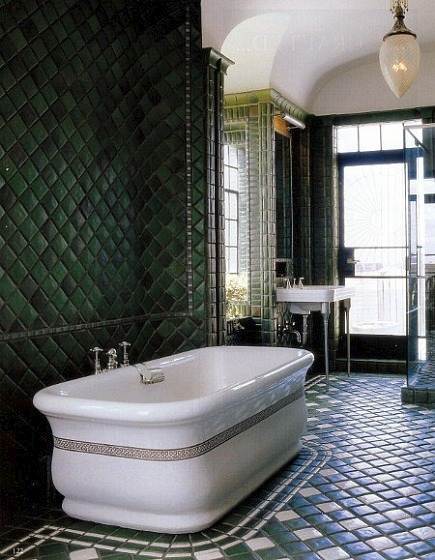 Christmas green, white and pewter comprise the stunning color scheme in this tile masterpiece bathroom, created by legendary designer Jed Johnson in a New York City penthouse.  With a pair of doors opening onto a terrace overlooking Central Park, it’s hard to imagine a bathroom as movie-set-worthy.

But when would you say it was built?

The look of green, white and pewter tile masterpieces is strictly early 20th Century Arts and Crafts, both in color and style.  Most interesting is that the surfaces were planned like a giant jigsaw puzzle with the thick, artisanal handmade Pewabic tile, from Michigan comprising all the pieces. Each piece of tile is square and dimensional in that the top is cushion-shaped. And each piece of tile was ordered to fit perfectly into a particular space – with no cutting whatsoever! 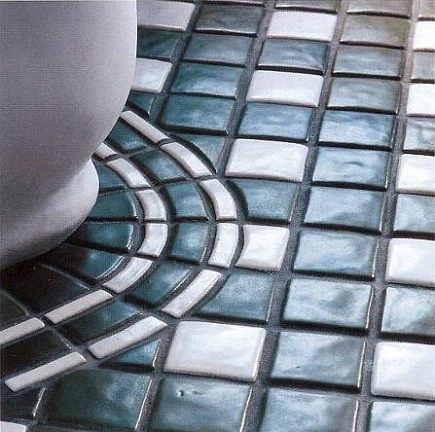 In addition to the extraordinary color is the huge quantity of tile used to cover the floors, walls and window recesses all the way up to the vaulted ceilings. 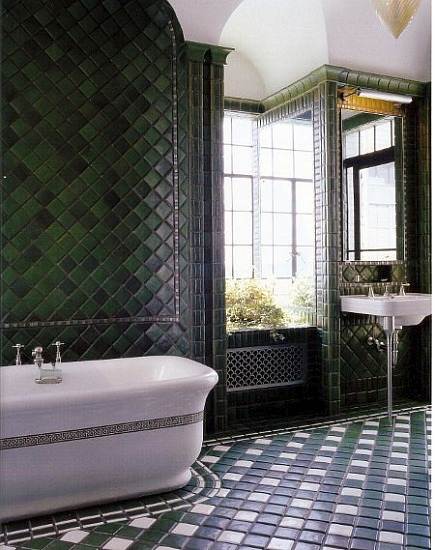 While the walls are almost solidly pine-green, with discreet nickel dots in the borders, the floor mixes in alternating rows of white and green alternating tiles, which picks up the color of the vintage French porcelain tub and sink. The Deco-Moorish stencil detailing on the tub was added to help conceal a change in the exterior surface.

Mirrors inset over the sink were repeated around the corner in the window niches to help bring in light.

Arts and Crafts tile has a strong tradition in New York City.  A father and son team of Spanish immigrants, both named Raphael Guastavino, produced highly influential public and private tiled buildings between 1889 and 1962, including Carnegie Hall and Grand Central Terminal.

Now for the answer to the question about when the bathroom was built. It is not a vintage room, having been put together in 1993 by the late New York designer Jed Johnson. His work continues to be an inspiration.