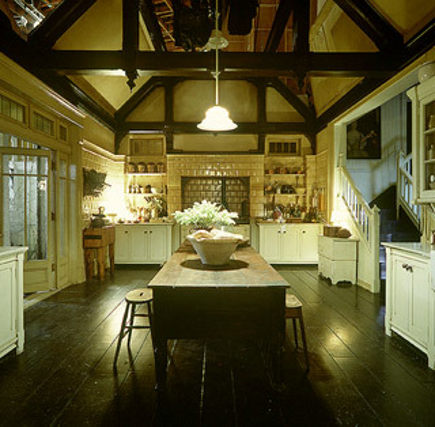 English-style cabinets, rustic tile and an Aga go to Hollywood for the Practical Magic Kitchen.

The Practical Magic kitchen is the center of action in the 1998 Sandra Bullock-Nicole Kidman film about a family of ladies with some spooky special abilities. A lot of the film revolves around action the Aga cooker and  the big, long table.

While the style of this kitchen was by no means as influential or as popular as the more delicately proportioned white kitchen in 2003’s Jack Nicholson-Diane Keaton comedy  Something’s Gotta Give, it  has a rustic staying power that, right now, is looking equally classic and — I’d like to suggest — a bit more interesting. 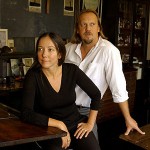 In a 1998 article in Victoria Magazine (doubtless a publicity piece for the film), Standefer describes the kitchen as “light, utopian, jovial. It’s the most used room on the set, the heart of the house.”

She then drops breadcrumbs that fans of this kitchen crave, saying she wanted it to have a cream color visible in the Ann Sacks tile. Dark floors and a high, trussed ceiling  “harks back to seventeenth-century English cottages,” Standefer added. “The Aga is almost like a shrine,” she said of the cream-colored English range and the kitchen’s focal point. 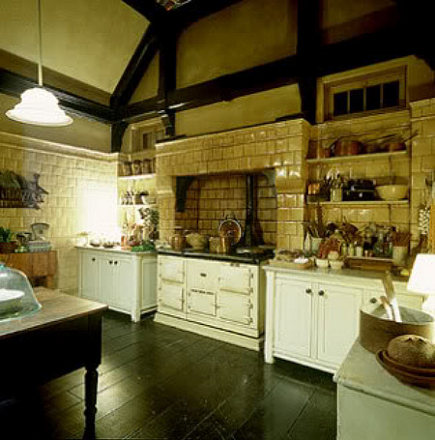 There is most  definitely a tile look, centered around the range hood and continuing on the walls. Ann Sacks is a fashion-tile house and while Standefer didn’t identify the exact pillow-shape field tile she used in the movie — set in running bond, or staggered —  I found the “Chateau” range, 6′ x 6″ crackle in the jaune princesse (princess yellow) colorway which would produce a similar effect, as the sample photo shows. 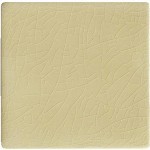 The floor could be duplicated using reclaimed wood, now widely available, but these days 10″ to 12″ wide boards tend to be wildly expensive. In many older homes, particularly in New England, they were standard. Aga is trying to make inroads in the American market. 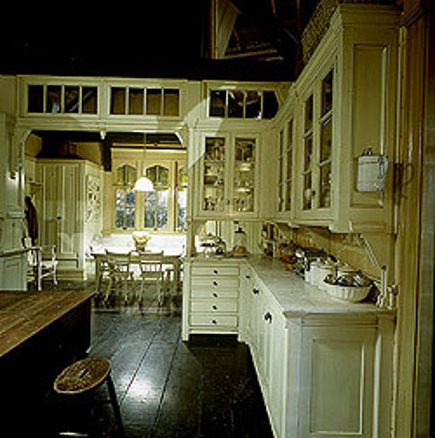 It’s not difficult to see why Victoria featured the spacious, old-house style kitchen given the elaborate cabinetry with brackets, corbels and spandrels over upper cabinets. Standefer also noted  that glass in the cabinet doors was rippled like antique hand-blown glass as “it casts a different light,” to help the overall effect.

The Roman and Williams design firm was founded in 1999 by Standefer and Alesch. Among their clients are Ben Stiller, Kate Hudson and Gwyneth Paltrow. Any questions about whether the Practical Magic kitchen was the predecessor of their own New York loft kitchen were affirmatively answered by a New York Magazine article in 2005. 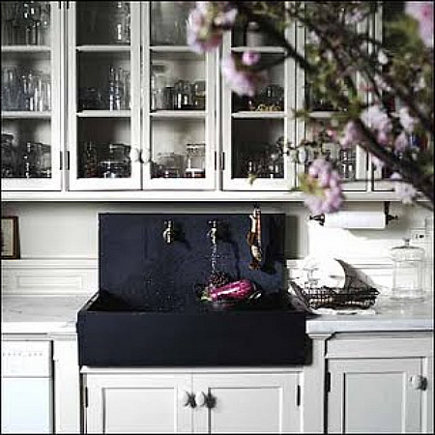 Photos of the design team’s New York loft kitchen include the sink they found in a Rhode Island mill (which also made a cameo in the film Addicted to Love) set into white cabinets with detailing inspired by, and similar to,  the Practical Magic kitchen.

The same pendant lights appear to be used in both.  Vectors in the photo  point to the island’s white marble — another common feature.  However, there is no Aga. A Garland range, ca. 1968, was inherited from the loft’s original owner (Garland later cloned the Blue Star for residential use.) 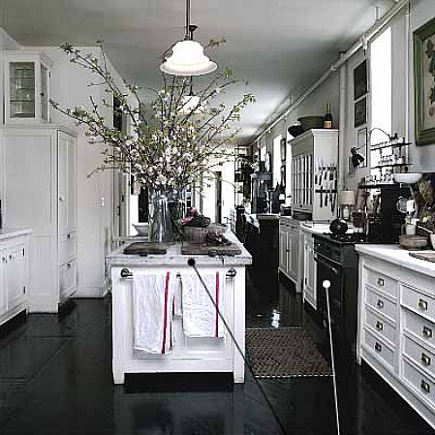 “We like weight, we like density, we like materiality. We like a lot of detail. We like articulation. We like a certain kind of conflict within the design, where everything doesn’t match perfectly, and there’s a bit of voltage between objects in the architecture” Standefer said in the New York interview. “You know, everything is not sort of so serene.”

Copy and paste link to quick-share this post: http://bit.ly/Iv9wnG