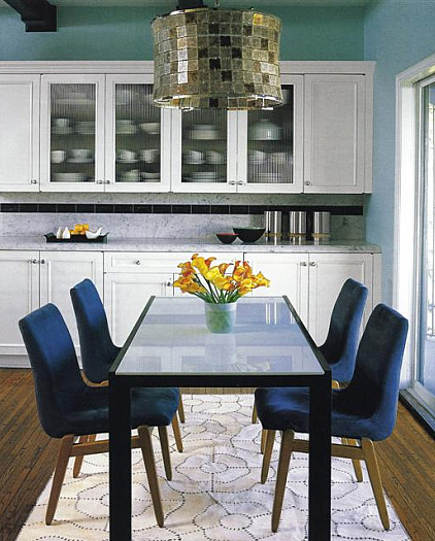 Even a long-dead movie star like Hollywood legend Errol Flynn can distinguish a house.

At some point, Hollywood legend Errol Flynn, the star of film classics like 1935’s “Captain Blood” and 1938’s “Robin Hood,” lived in this 4500-square foot, 1926 Mediterranean style, hillside home in the Hollywood Hills. The house has an 18 x 21-foot kitchen plus a panoramic city view from the dining area. Errol Flynn wasn’t known as a cook and his reputation as a ladies’ man is said to be the origin for the naughty phrase “in like Flynn.”  If only walls could talk.

Update – After this post appeared I received a note from color expert and fellow blogger Sonu, the senior interior designer at Benjamin Moore. Sonu’s ideas about the use of color in this kitchen are excellent and explain how the color and design work together to make it timeless. 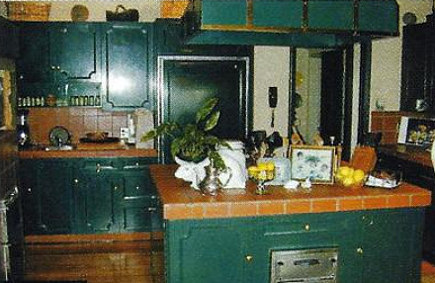 The kitchen had been redone in the 1970s with Sherwood Forest green cabinets. The ’70s vent hood was painted green to match the cabinets and both counters and backsplash were  terracotta tile, then wildly popular. 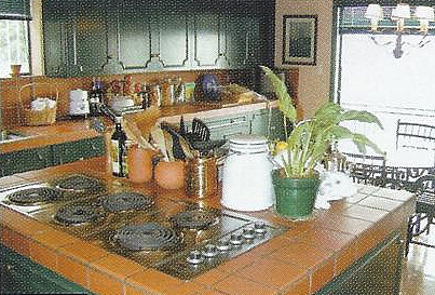 There were electric coil cooktops facing out towards the large sliding glass door that overlooked the city. The previous chandelier was out-of-scale and with the little clip-on shades provided very little light. 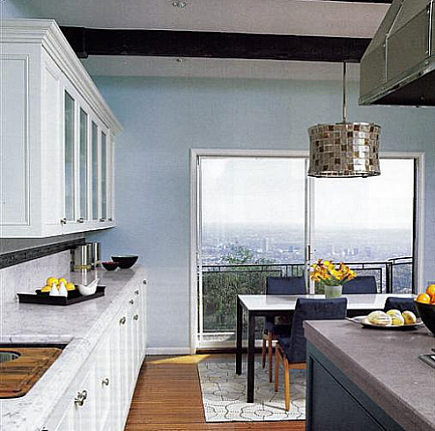 The current owners loved the kitchen’s layout and workability but wanted a  mid-20th century modern sensibility combined with an early 21st century neutral palette of blue, white, brown, and black. A light-catching Vreeland mica chandelier from Fuse Lighting became a focal point over the dining table and chairs. 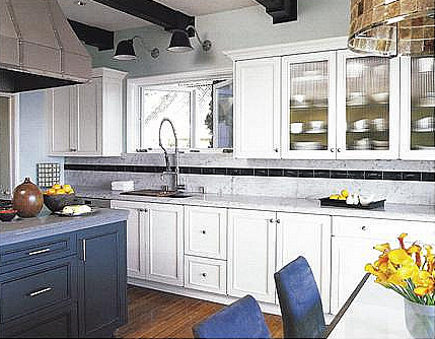 Since the metal cabinet carcasses were in good shape, only the 32 lower Shaker-style doors were replaced. Brass hardware was redone by dipping in a nickel matte finish. The peg and groove oak floor was refinished.  Upper cabinets, with reeded-glass doors, are new. 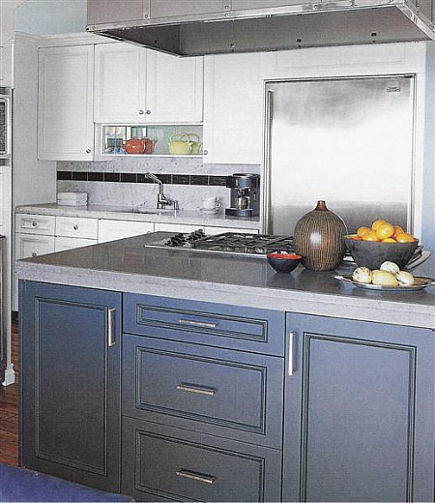 The subdued color scheme masks a surprisingly disparate grouping of materials in the space. Walls (Benjamin Moore’s Summer Spout), the island cabinet and the dining chairs are various shades of blue. Benjamin Moore Simply White paint was used for trim while Farrow & Ball Lime White became the coating of choice for the cabinets and ceiling. Cedar ceiling beams were given a java tint. Above the new gas cooktop in the island the old vent hood was repainted (with Farrow & Ball’s Mouse’s Back, one of our favorite colors) and given new metal trim. Two perimeter walls were done with Carrara marble counters and backsplash that includes a line of vintage black embossed tiles. Franke Pro series sinks and KWC faucets replaced the two pre-existing sinks. The island also was resurfaced with gray Walker Zanger basaltina stone. 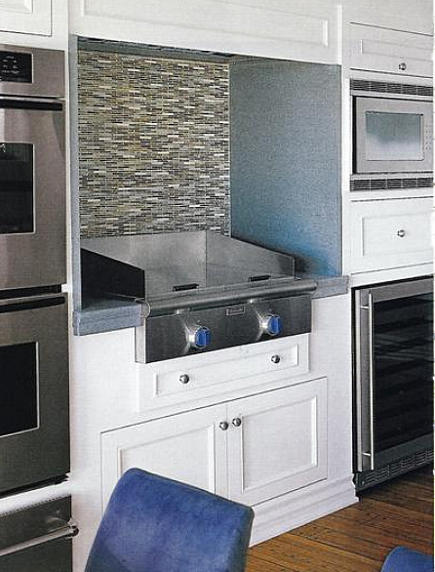 Appliances (some relocated) include the Thermador ovens and indoor grill, a DCS warming drawer, Sharp microwave, a GE Wine cooler and Sub-Zero built-in refrigerator. Behind the grill, designer Michael Berman used Erin Adams “Zen Weave” glass-tile from Ann Sacks, which mixes up the blue-white-gray-brown palette and brackets it on an appliance wall. As a kitchen that preceded the return of the blue-white-and-neutral mid-20th-century palette, it looks as  timeless as that style.