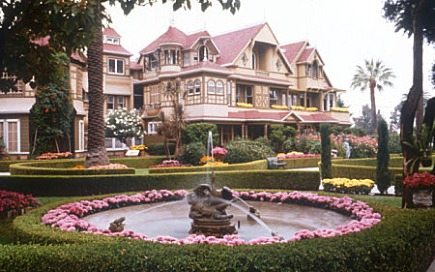 The Winchester House may be more odd than mysterious.  Ghosts, spirits and haunted mansions are what mysteries are made of and the Winchester house is all that and more — much more.  If legend is accurate, the house is a testament to one woman’s heart-wrenching grief and her never-ending quest to remain alive. 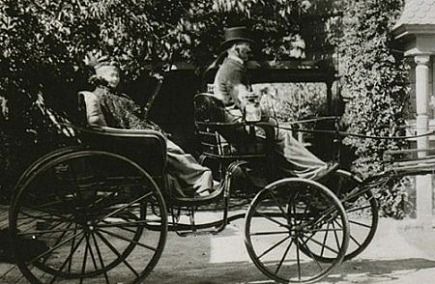 Welcome to the former home of Sarah Winchester [left], heiress to the Winchester Rifle empire. Legend has it that following the tragic deaths of her infant daughter in 1866, and husband William in 1881, she sought solace from a psychic who told of a curse on the family.  The spirits of those who died from the Winchester weapons were seeking vengeance. The only way for Sarah to remain alive was to move west, build a house and never cease building or the spirits would come after her. 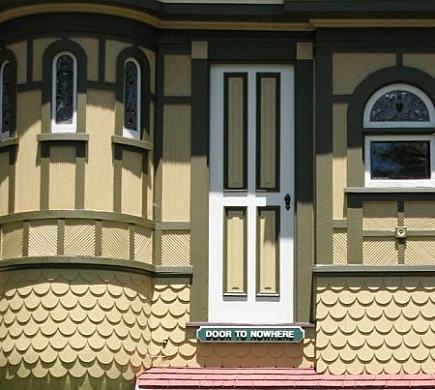 And build she did. In 1884, with an estimated $20 million dollar inheritance plus a 50% interest in the Winchester Company that provided her $1,000 a day, Sarah purchased a Victorian home in San Jose, California and began to add on.  For 38 years she kept local carpenters employed around the clock adding room after room, twisting hallways, trap doors, stairs leading to nowhere and doors opening onto walls so the spirits would become lost and unable to find her.   Construction began in 1884 and ceased 38 years later on the day Sarah died.  Cost to build: $5,500,000 – total rooms: 160. The famous door to nowhere (above) opens to a two-story plunge. 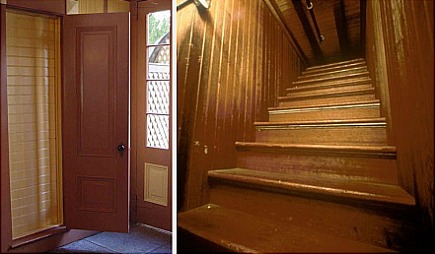 The door [left] is one of 950 in the home.  It opens onto a wall and stairs [right] lead to nowhere. 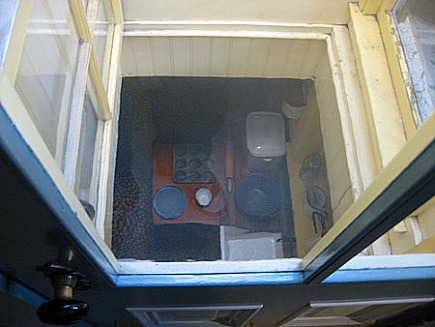 This view through a door shows a window in the floor that overlooks one of six kitchens. 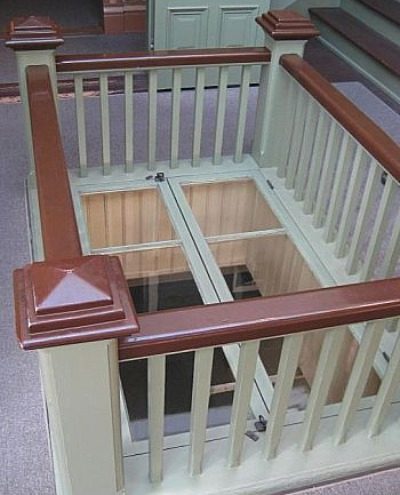 xWooden banisters surround a skylight, one of 52 floor in the house.

xSarah Winchester’s fascination with the number thirteen can be seen throughout the house.  Thirteen coat hooks in the seance room’s closet and every sink drain had thirteen holes. 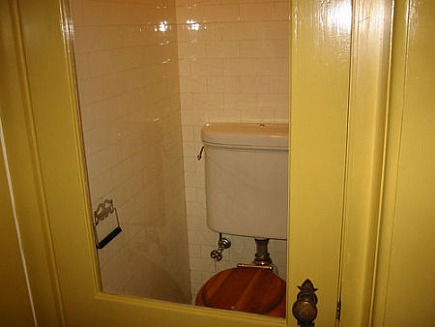 xEven filled with oddities, the home’s modern day conveniences were uncommon for the era: indoor plumbing consisting of toilets and shower, steam and forced air heating, gas lights that operated at the push of a button, and three working elevators.  All bathrooms had windows in the doors to provide light and allow Mrs. Winchester’s nurses to attend to her in her later years. Additionally, he ballroom’s parquet floor was constructed from six different hardwoods. 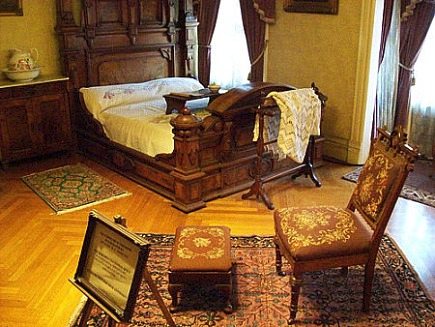 xSarah Winchester died in her sleep at the age of 83 on Sept. 5th, 1922.  Following her death, the home’s lavish original furnishings were auctioned.  It is said to have taken workmen weeks to remove the contents because they kept getting lost in the labyrinthine hallways.  Period pieces like this Eastlake chair and Persian carpet in one of the home’s 40 bedrooms were donated to the house, now a registered California historical landmark.

Copy and Paste the Link to Quick Share this Post:http://bit.ly/1Rdu0RD