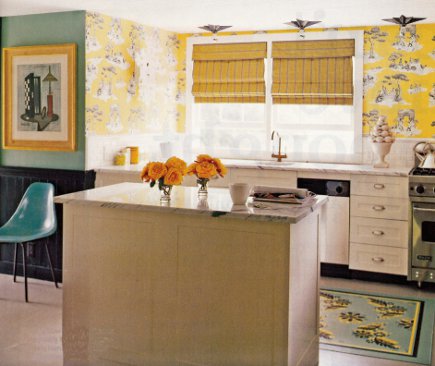 A magazine feature on Sheila Bridges country kitchen, in the late and lamented Domino magazine, highlights several unique features. Chief among them is her “Harlem Toile de Jouy” wallpaper, a modernized print in bright yellow on her kitchen walls. As Bridges explains it the Studio Printworks website  “Harlem toile de Jouy tells a rich, yet satirical, story about African-American life through the often-distorted lens of the media. I designed it to remind people of many of the stereotypes that have historically been and continue to be associated with African-Americans living in rural parts of the country as well as urban areas like Harlem.”

The “Florentine Floral” floor cloth, another of her creations from Smith Floorworks, links the kitchen colors to the vivid green-blue hue, called Arsenic (from Farrow & Ball) used in the adjacent room. Otherwise, the kitchen is relatively straight forward: white perimeter cabinets, white subway tile backsplash, gray-green island cabinet to blend with the gray floor, and marble counters throughout. There is a Viking Pro-style range. Adjacent, over-the-sink windows are covered with handsome Roman shades made of George Spencer Designs’ “Lucy in the Sky” fabric. A trio of stylish “Star Flush” ceiling lights (from a favorite source, Hudson Home, in Hudson, NY) further contribute to the perfect design pitch. 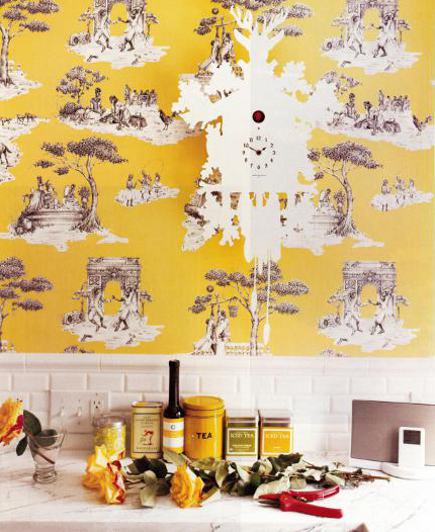