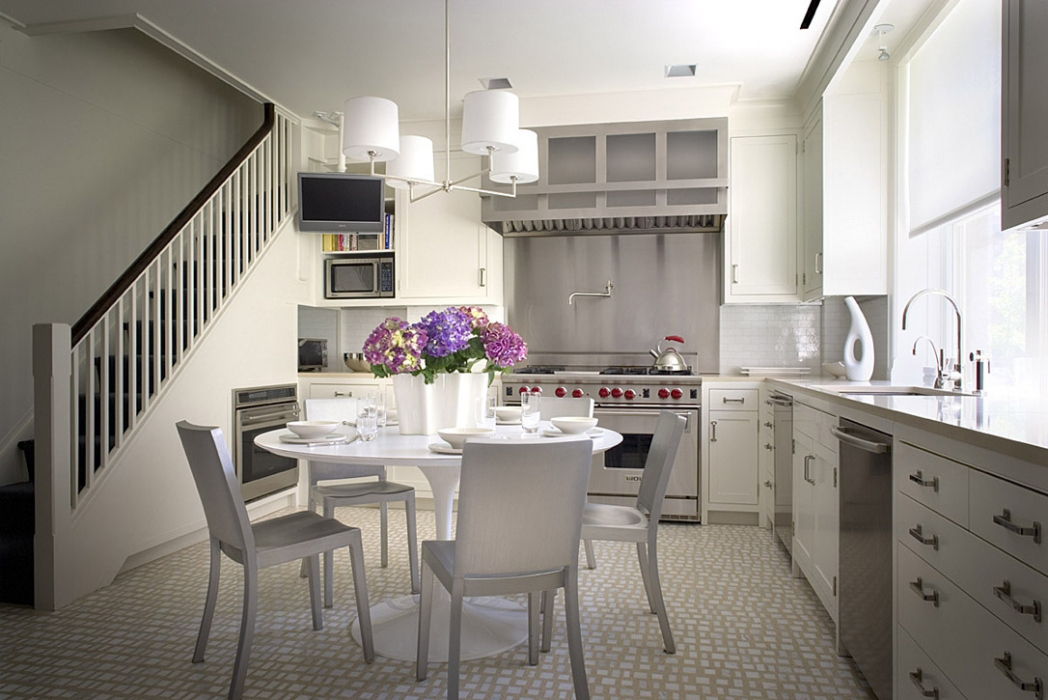 In a white and stainless kitchen, the cool tones keep thing light and neutral.

Bright reflective surfaces in a white and stainless kitchen help things looking large and cool even when a staircase occupies valuable kitchen real estate. Taking a cue from the Wolf range and other appliances, stainless steel in this kitchen has a brushed texture, even on Philippe Starck’s brushed aluminum Hudson chairs around a Saarinen table. So the material used for functional appliances is elevated into a design element.

It’s also clear that every inch of this kitchen matters. It’s not a large space — so small, in fact, a Wolf wall oven was installed in dead space under the stairs! While the oven sits higher than one of the ovens in the 48-inch range just a few steps away, the door opens into an aisle. Clearly there was no other place it could go. The presence of two dishwashers indicates that the kitchen must function for large parties and stashing a microwave on an upper-cabinet level shelf sends another message: young children don’t cook here. A toaster oven is tucked into an additional open space carved out below the staircase.

This handsome kitchen by New York designer Eve Robinson treats a serious range ventilation system as a decorative element, an effective approach to the form follows function mantra that so often raises issues in kitchens. Other noteworthy details include a the charming brick-pattern floor that appears to be vinyl and a graceful Dornbracht gooseneck sink faucet with side sprayer. A small flat-screen is suspended from the ceiling and swivels on a pole. Fortunately, it’s far enough from the attractive four-arm pendant light to not interfere.