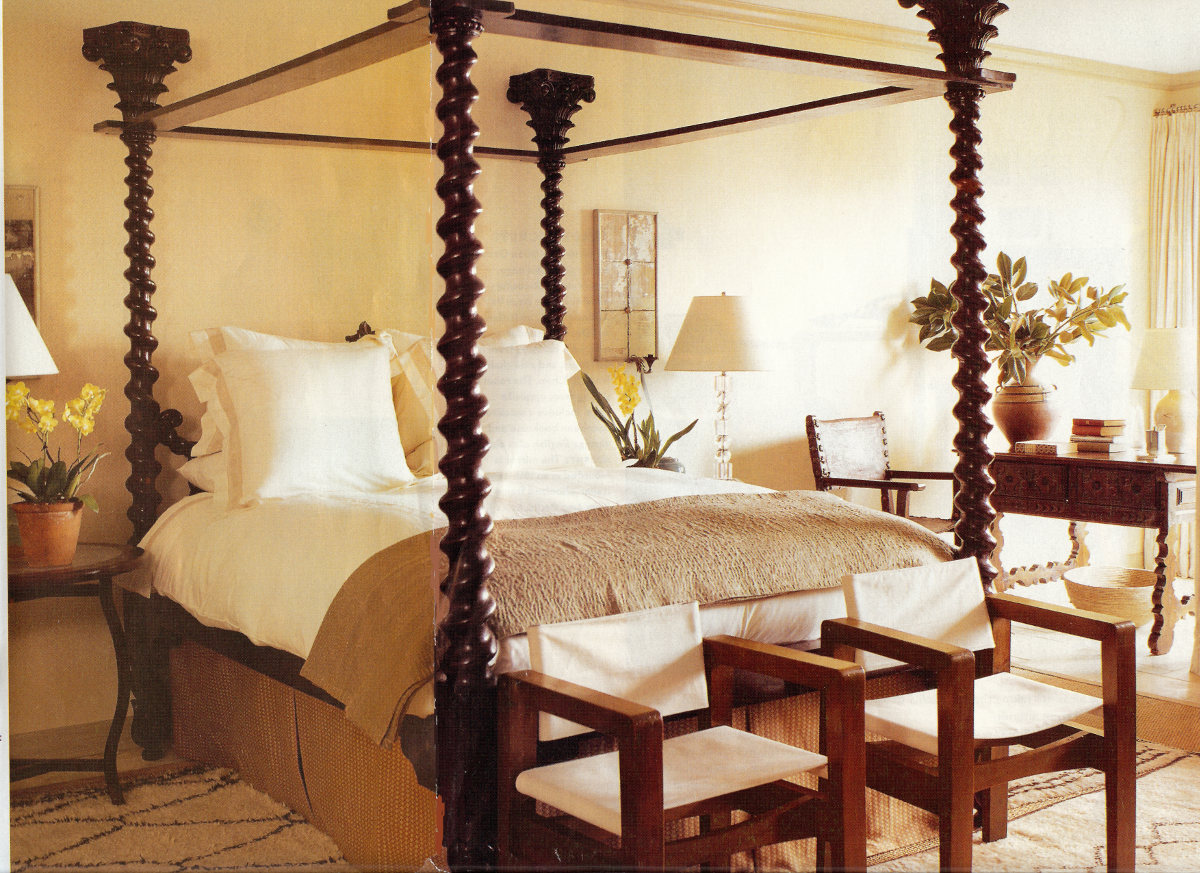 A home by Michael S. Smith in Hollywood colonial style has antique furniture worthy of a starring role.

“I don’t know whether it’s cause or effect — because I work with so many clients in films, or the reason I have so many clients in films, but I have a cinematic feel for interiors,” Michael S. Smith told an interviewer from House & Garden magazine. Smith, a California-born and based designer of textiles, plumbing fixtures, tile and furniture is a prolific designer and book author whose clientele includes the Hollywood establishment.  Notoriously demanding, but creative types, who buy historically important West Coast homes built by the likes of Schindler, Neutra, Wright and Eames see houses as a reflection of their taste and success.

The occasion for the quote was an article on a warm and masculine house Smith designed for the spiky-haired film and TV producer Brian (“A Beautiful Mind”) Grazer and his former wife, “Starter Wife” creator Gigi Levangie Grazer. This house had a Mediterranean villa vibe I fondly call Hollywood Colonial — wood beam ceilings, dark wood floors and off-white walls. The distinctive richness comes from superb antique furniture, carpets and architectural elements that movie money buys. Smith embellished it with a super-sophisticated mix of Chinese, Indian, Moroccan, Spanish and French pieces, ranging in styles from Baroque to mid-century modern. The guest bedroom [top] was dominated by an Anglo-Indian bed Smith purchased in London and it’s difficult to take my eyes off the antique Berber rugs. A pair of 1940s French chairs stand at the foot of the bed, dressed with Eleanor’s Ribbon linens from the Nancy Koltes collection. Bedside crystal lamps are of Smith’s design. 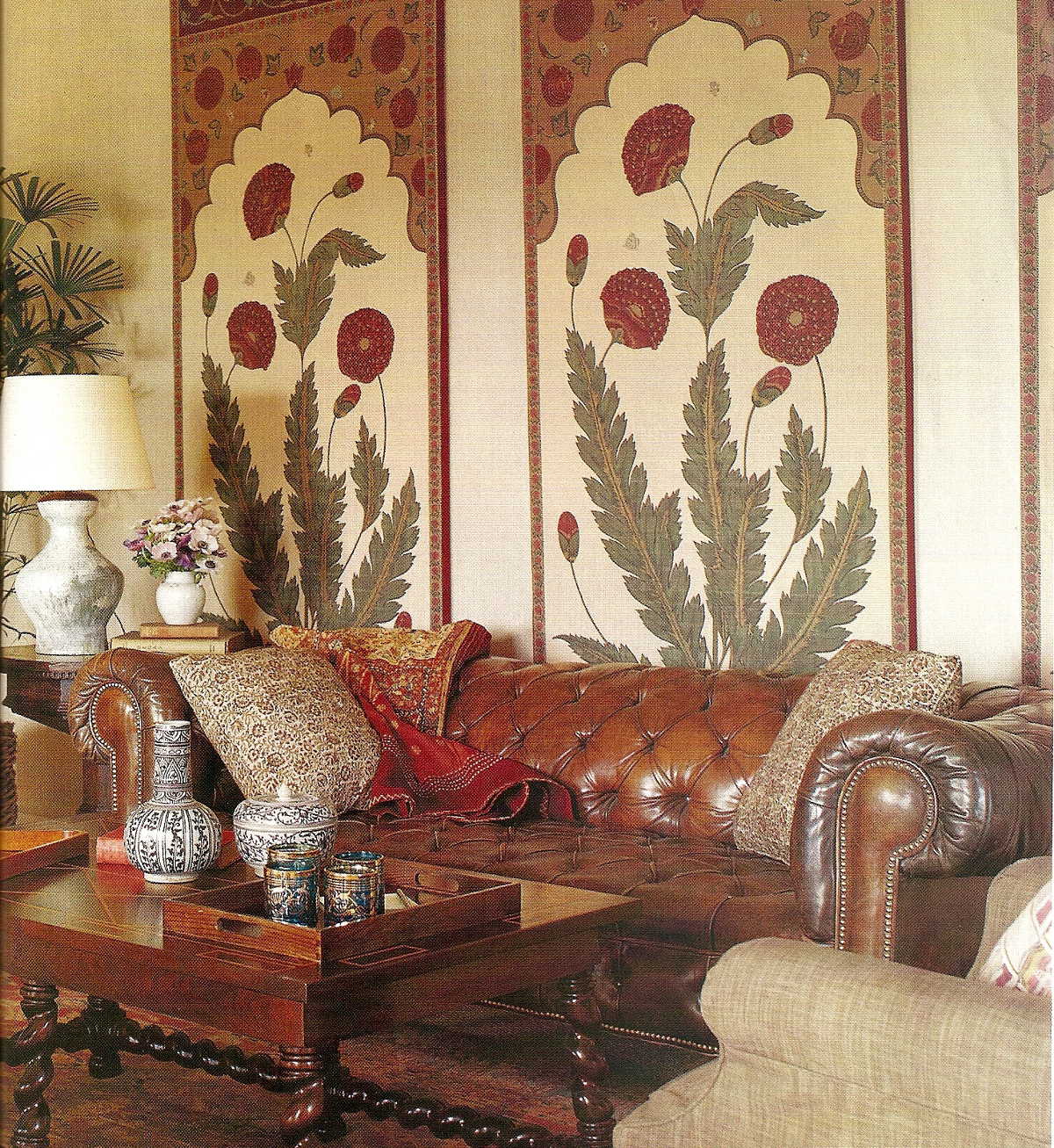 A good deal of leather upholstery adds a very solid, and surprisingly homey, mix to make the house luxurious but inviting. “In every room you can drink a cup of coffee and read the paper,” Smith said. One thing I find especially appealing are all the beautiful tables and it would be fascinating to see what he did in the kitchen and master bath, which were not shown. What appeals to me is the lack of pretension despite the awesome expense of such artful furniture. Accessories lean East rather than West and rooms have unexpected elements and details which aren’t immediately obvious. It’s a house to be studied because, as Smith explained: “The houses people remember are the ones that have a soul.” In the seating area of the billiard room, a vintage Chesterfield sofa, George Smith armchair and barley-twist-leg low table provide a plate to flop. Wall hangings are reproductions of an antique Mogul tent panel Smith found. Paint color is Pratt and Lambert’s Burnt Umber. 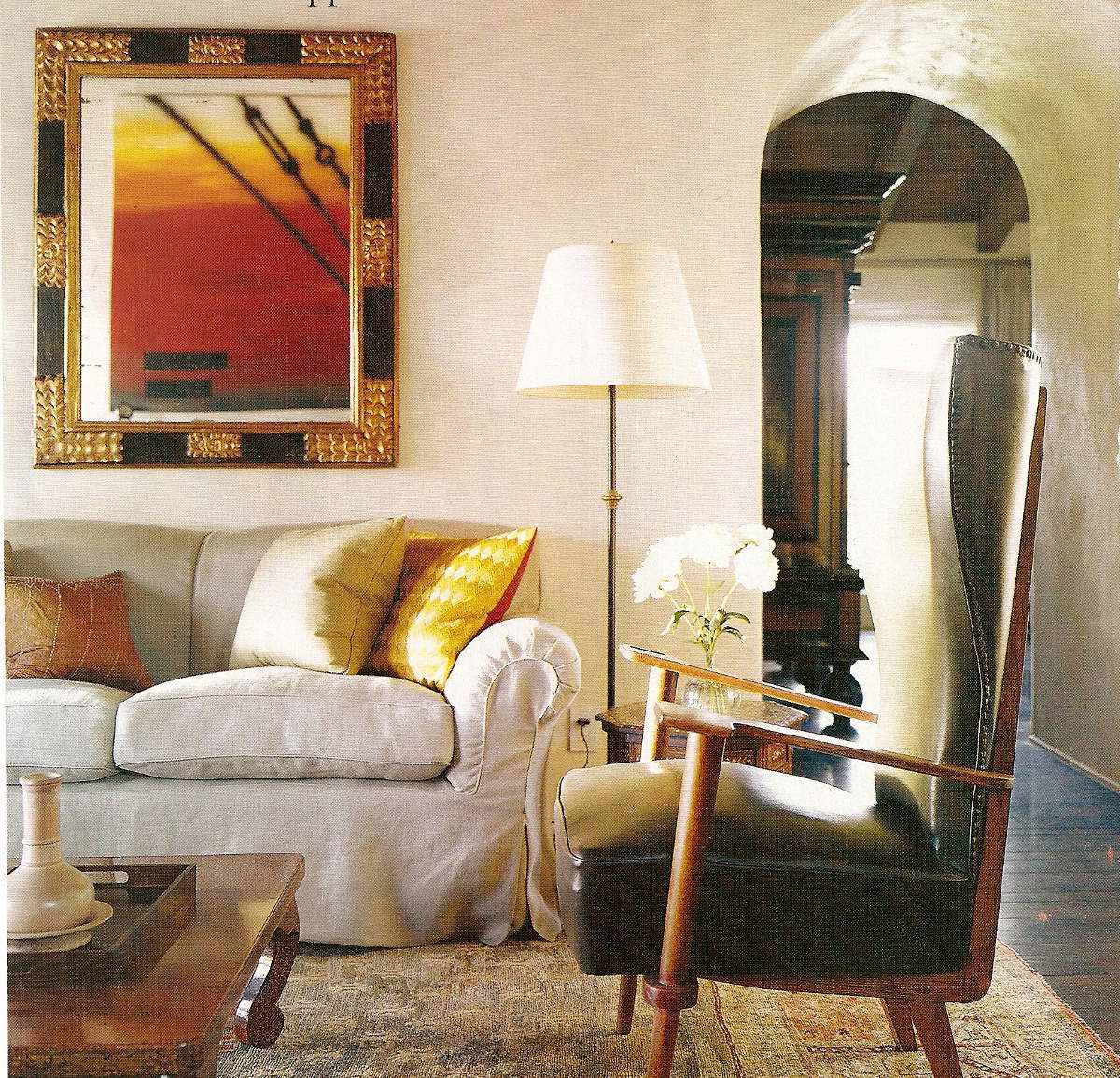 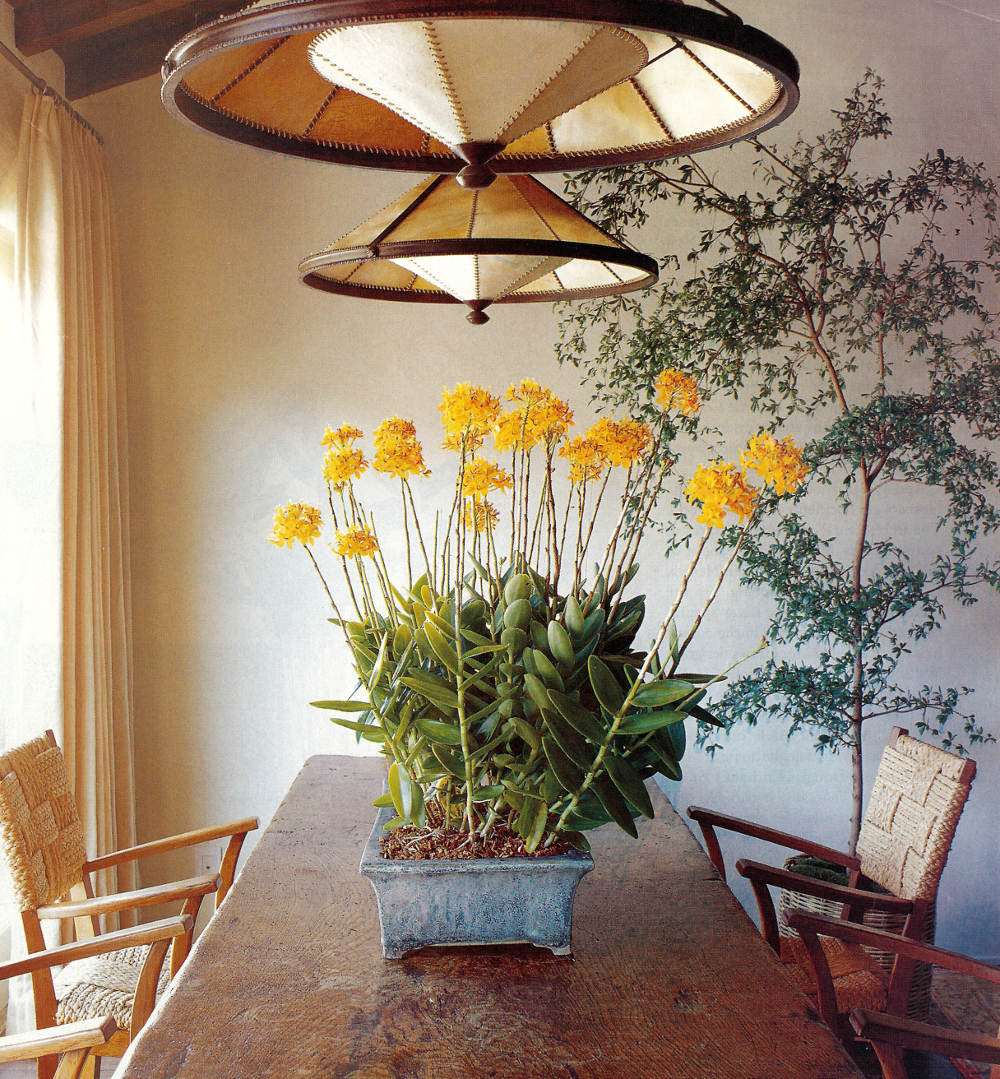 Forgive me for drooling over the 1940s French chandelier with parchment shades and whipstitch detailing hanging above the French 19th century elm refectory table in the breakfast room. 1940s French oak and rope chairs are by Audoux-Minet. 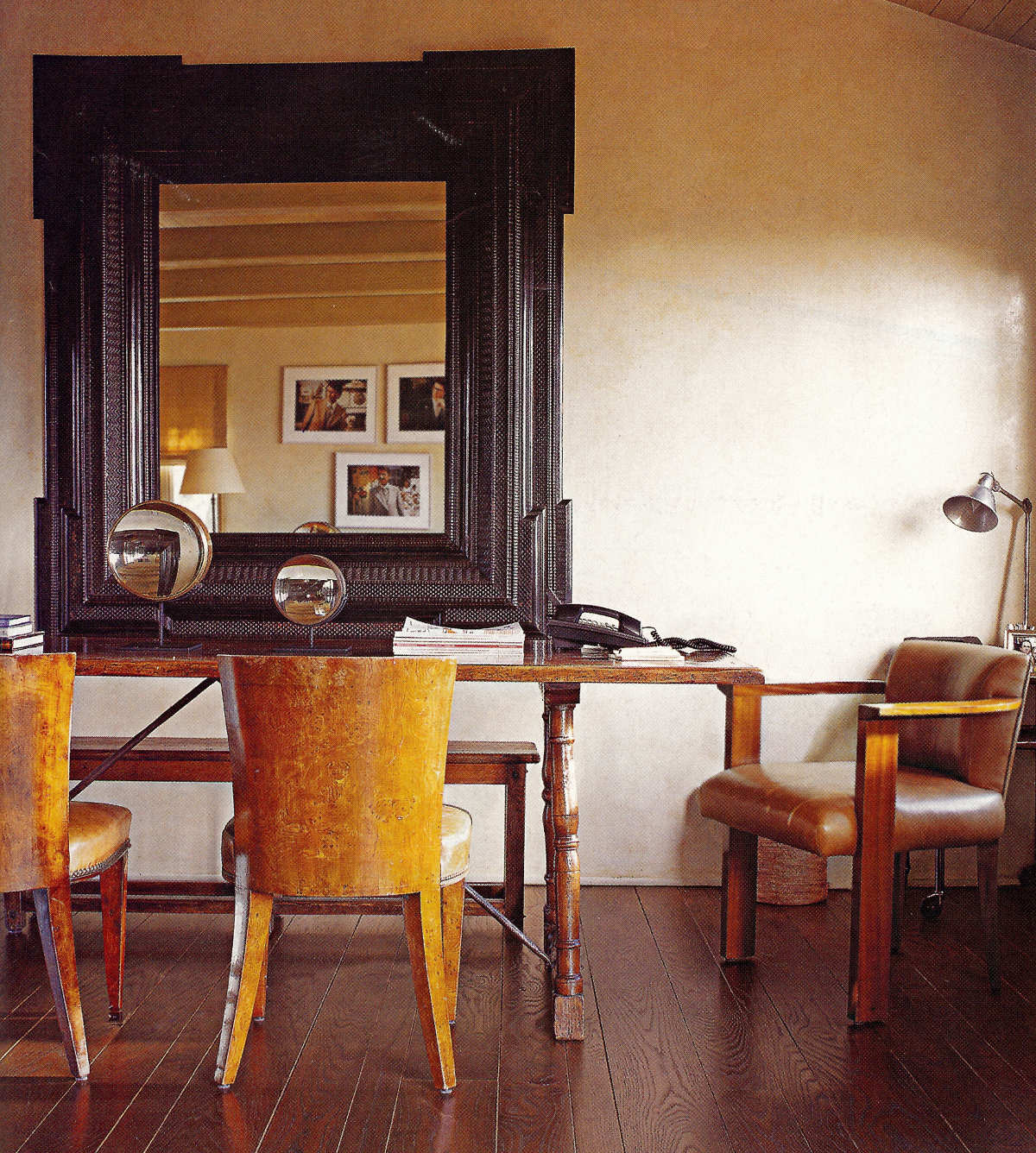 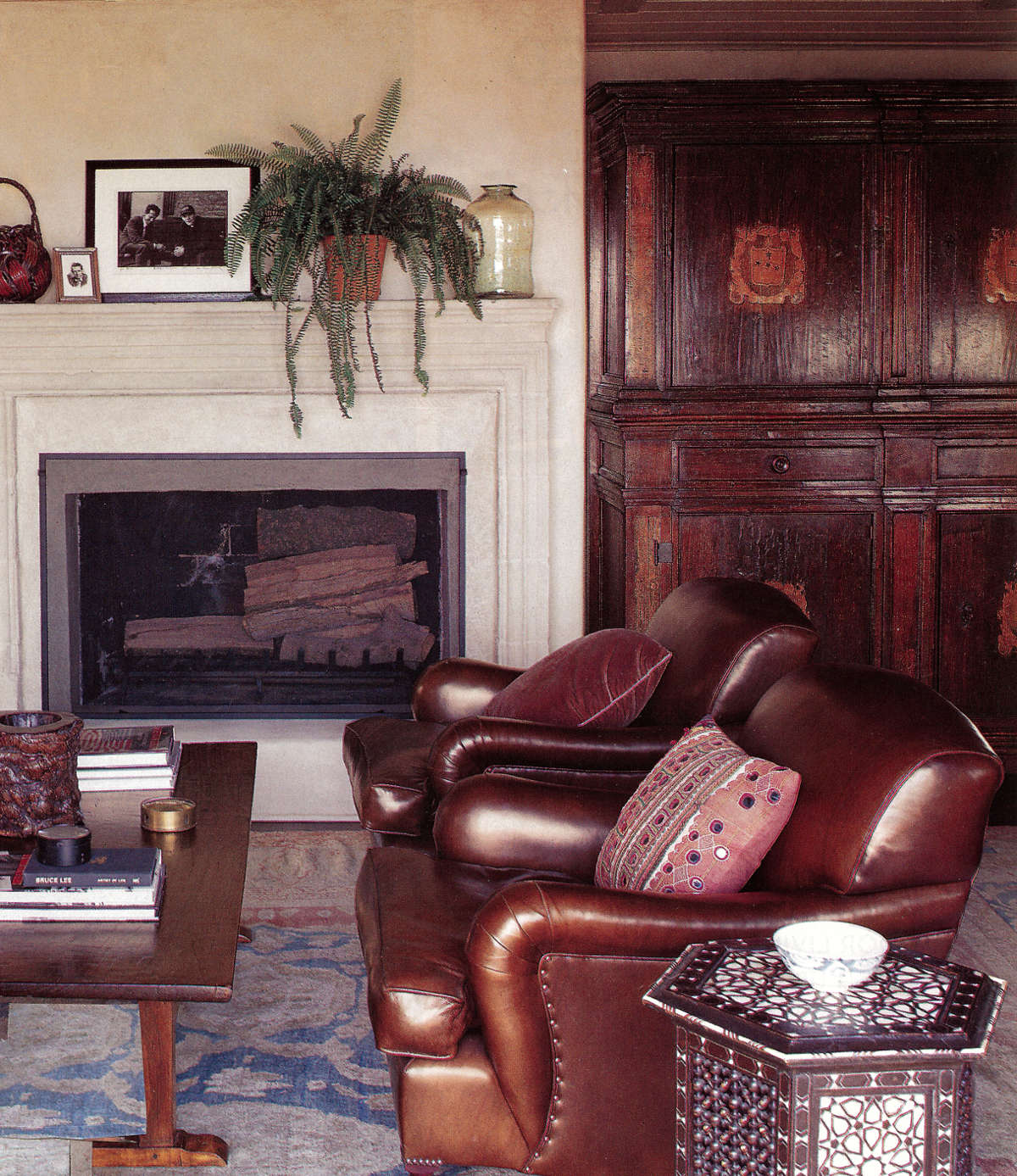 A 17th Century French limestone fireplace was purchased locally and installed in the work room seating area of the home office, along with vintage English club chairs and a beefy Jacobean cabinet. Hollywood producers often hold meetings at home.

A Spanish-style trestle table is paired with leather Baroque-style side chairs plus an Italian walnut host armchair and an antique Sultanabad carpet in the dining room of the house. In a way, it’s a fitting look for entertainment executives who are Hollywood royalty in their own right.