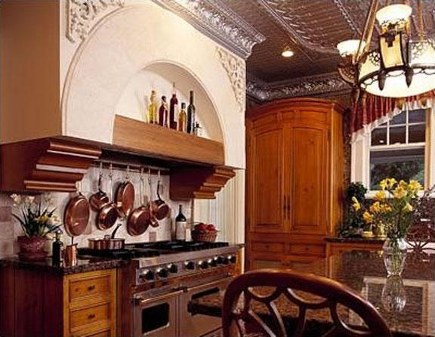 In a kitchen super-abundant with detail the most striking feature – embossed tin tile  – stands out.

Tin tile was used for ceilings early in the century as a way to add detail and pattern but inexpensively. No doubt the tiles were also used for cosmetic reasons. Tin tile isn’t for every kitchen but it works in this one which is full of Victorian style details including the light fixture, curtains and an armoire. The ceiling tile recreates a  Gothic-arch pattern. There are elaborate borders that function as crown molding and the silver hue is most often seen both in original ceilings and in new ones designed to look old. Such a ceiling would be a knockout with many kitchen styles, particularly something very modern and hard-edged. Here, there’s a good deal to compete.

Down at eye level — not to be outdone — there are Victorian-taste details. First is the antique armoire with an arched top just tall enough to graze the crown molding. Over the range there are muscular wood corbels with a matching beam. The front of the chimney hood also is embellished  by a Romanesque arch flanked by relief brackets. Incongruous over the big Viking range? Perhaps. But it’s all a matter of taste. Stir in a pot rack, modern granite on the island and stools with Hepplewhite backs and you have an eclectic mix of kitchen elements that is individual, if elaborate.