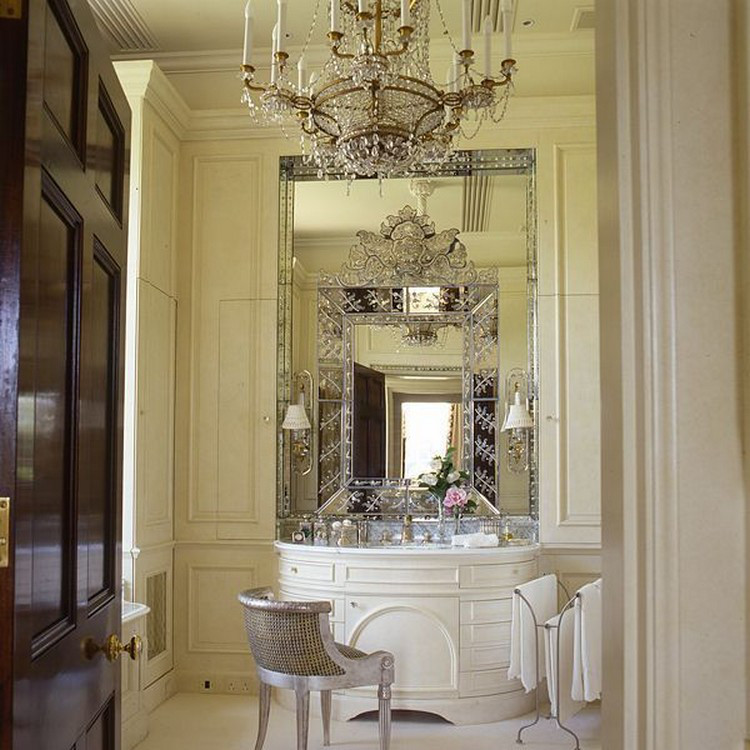 Details in a French château bathroom seem larger than life, due to the grand scale of the rooms.

Modernizing Madame’s French château bathroom? That starts with wood-paneled walls (boiserie), that have concealed storage behind barely visible panels – see the telltale crystal knobs. The French have long been fond of judiciously cutting into antique wood paneling to create closets and cupboards, even in a setting as grand as this one. But then what happens beneath a vanity mirror that’s nearly 14-feet high? A special vanity, of course. It could be said that a curved bathroom vanity has roots in a serpentine front antique bombé commode in the sense that it’s a modern, simplified version. Here that takes the form of a storage piece with curved-front drawers. Very swanky in it’s own right, especially with a marble top. The mammoth over-mirror also has sconces mounted directly on it. Note that there is an elaborate Venetian mirror reflection in the center. A peek at the ceiling and floor shows that the château has been modernized since air conditioning vents are visible in the ceiling and electrical outlets have been worked into the baseboard. Happily, a mammoth Empire chandelier of the appropriate scale was either preserved or added to help keep the effect of 18th century elegance with benefits — including a silver-gilt chair. Nobody does it better than the great Alberto Pinto.