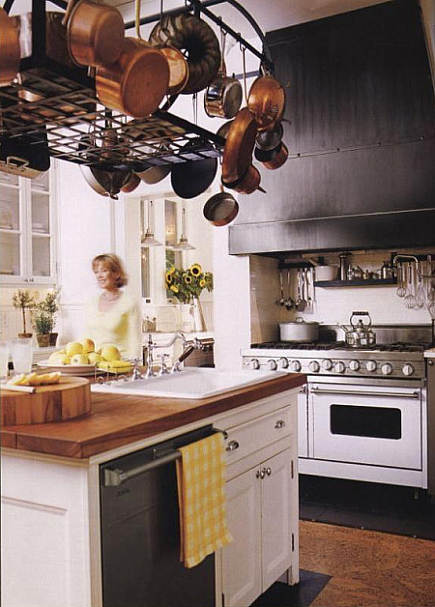 A big black hood from the ‘time before stainless’.

This large black hood is likely custom made. And it’s so massive in this kitchen space it becomes the dominant design element. It also works the play of  black and white appliances that was popular before the kitchen renovation boom of the early 2000s. The hood holds sway over a white gas range surrounded by a black inset in the floor. Likewise, a black-front dishwasher is installed into a white island, also set on a black area with cork surrounding it. The large wrought-iron pot rack over the island ties into the black elements while the wood counter on the island functions as a neutral material nearly the same color as the main areas of the floor.  Only the drop-in enamel sink with seems anything less than current although this kitchen design reflects transitional trends between 2002 and 04 though the Waterworks Julia hooked faucet with side sprayer is a classic. Perhaps there’s some inspiration to be found in old ideas. Later, undermounted sinks and  farm sinks became more fashionable. A butler’s pantry is partly visible to the left of the doorway.