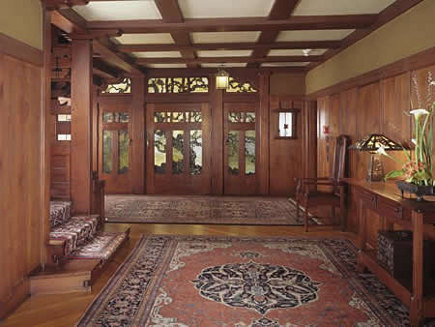 Our tour of ten historic homes and see what makes these architectural treasures great.

The iconic American teak and mahogany, 8200-square foot, Arts & Crafts home was designed by Charles and Henry Greene in 1907 for David Berry Gamble, heir to the Proctor & Gamble fortune. It is the only house designed by the Greenes to contain the original furniture and open to the public. The official website for the house has color photographs and panorama visual tours. 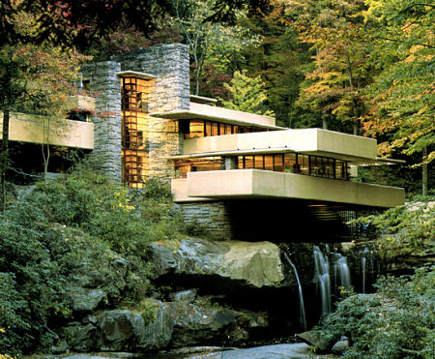 One of Frank Lloyd Wright’s masterpieces, Fallingwater has original furnishings and artwork intact. Built in 1939 as the weekend home for department store magnate Edgar J. Kaufmann, the house is famously cantilevered over a waterfall.  Official site. For more, there are additional photos of the Fallingwater interior. 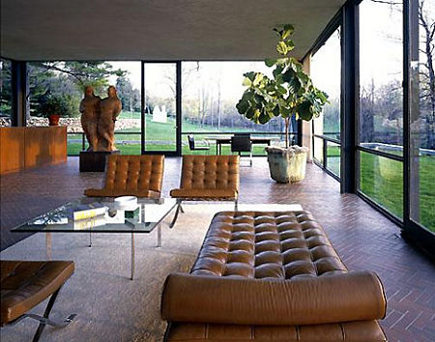 Built in 1949 on 40 acres, one of America’s most beautiful modern historic homes  was designed as a statement on postwar Modernism by Philip Johnson, the Harvard-educated architect, who died in 2005 at the age of 98. Interior and exterior walls do not touch and the space is transparent, with the bathroom (and presumably some type of kitchen set up) housed in a cylinder. Outbuildings include an underground painting gallery, a sculpture gallery, a one-room studio and library, and a gate house which will serve as the visitor’s center. The architect lived in the Glass House but following his death it opened to the public in June 2007. 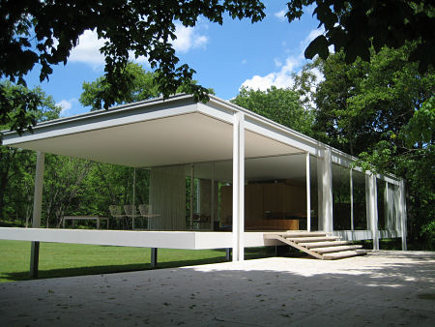 One of the premier architects of the 20th century, Ludwig Mies van der Rohe, brought the International modernist style of the German Bauhaus architecture school to the U.S. shortly before the outbreak of WWII. A model for the Farnsworth House, a completely transparent steel-and-beam glass house of unrestrained purity was first exhibited in 1947 by Mies at the Museum of Modern Art in New York (where it was seen by Philip Johnson). Designed for Dr. Edith Farnsworth in 1945, the house was built in 1951 with cast concrete floors and roof. Official site. 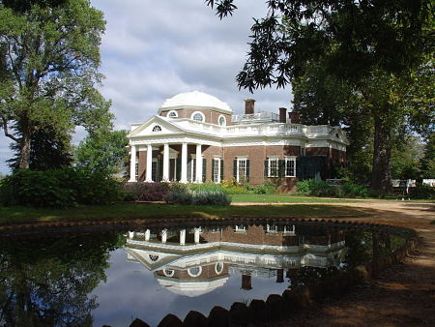 Thomas Jefferson began building his 33-room neoclassical home  in 1769, on a hilltop of the Virginia plantation he had inherited from his father. Work on the house, gardens and outbuildings continued throughout his life. In addition to his activities as a politician, political theorist and architect, the third American president spent time on mechanical inventions and botanical experimentation. The extensive Monticello grounds included a 1000-foot long vegetable garden, which served the plantation kitchens.  Official site. 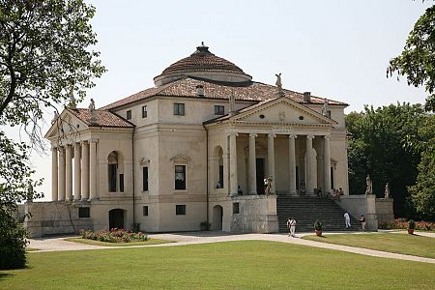 Italian Renaissance architect Andrea Palladio built five villas near Venice in his lifetime (1508-80) and wrote a four-book architectural treatise  in 1570, inspired by ancient Rome. The impact of the villas and the books made him the equivalent of an architectural brand name and profoundly influenced the next five centuries of Western architecture, especially in Great Britain and the U.S.  The last and most influential of his villas, this one features a flight of steps leading to a portico supported by six Ionic columns and topped with a pediment on each of the four sides, or facades of the building. The circular center or rotunda, is surmounted by a shallow dome. Palladio’s iconic window features three vertical parts with a fan-shape over the center section and remains a feature used in new homes even today. Tour Information.  Photos and history. 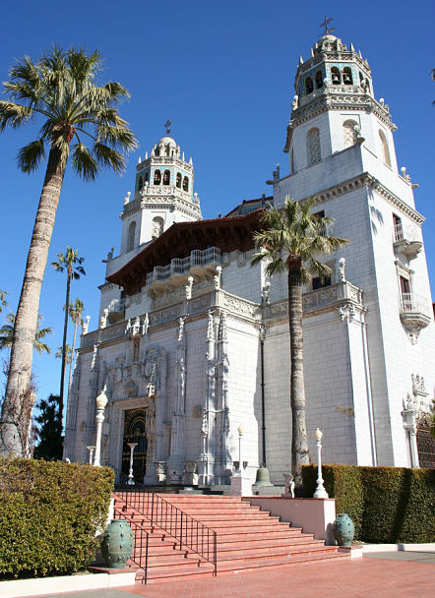 Press lord William Randolph Hearst began construction on his 200,000 acre ranch overlooking the Pacific coast in 1919. The main house, inspired by Spanish cathedrals, was designed by architect Julia Morgan  who applied many different styles to the Hearst ranch and spared no expense in importing and reconstructing complete rooms of architectural paneling. Considered somewhat of a monstrosity, San Simeon  was nonetheless an attraction, stuffed full of art and antique furnishings. It was the grand backdrop for Hearst’s Hollywood weekends with friends during the 1920s and 30s, and equally magnetic to the public following its donation to the State of California in 1957. Official site. More information and photos. 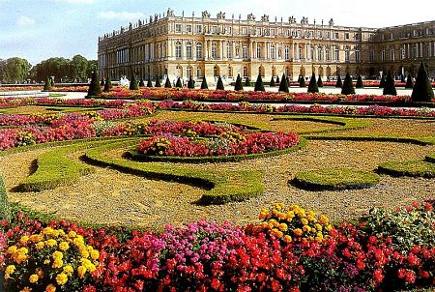 One of the most famous monuments in the world, the Palace of Versailles  was transformed from a hunting lodge to a royal residence by the French king, Louis XIV, and was the home of the monarchy between 1682 and the revolution of 1789 which established France as a republic. During those 107 years, the French court at Versailles fostered and defined French style. Court patronage developed the French textile, porcelain and carpet industries and nourished a standard of quality and refinement in architecture, furniture and the decorative arts that remains unrivaled today. Versailles is equally known for its gardens. Official site. 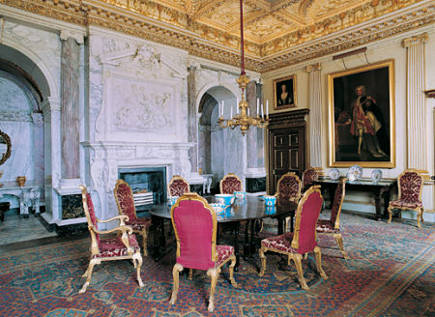 Sir Robert Walpole, the first English Prime Minister, began work on his Norfolk estate in 1717, hiring the great William Kent to create furniture and interiors of his own rich and unique design. When Sir Robert was named Prime Minister in 1722, he commissioned architects James Gibbs and Colen Campbell to transform his home into one of the great Palladian-style houses in England. Kent’s original furniture and interiors can still be seen at Houghton Hall although the family has managed to finance a decade of restoration and construction. The official website offers an extraordinary guided tour. 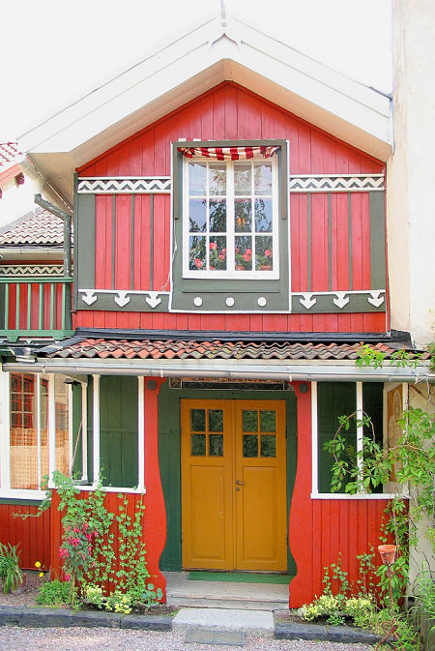 Swedish artist Carl Larsson is known for his charming artwork and his book At Home, in which he drew scenes of domestic life. Just as Norman Rockwell’s world centered on Stockbridge, Mass., Larsson and his wife, Karin, unwound in a country cottage at Sundborn,  which the couple took over in 1888 from Karin’s father. Decorated with bold colors, the house was something of a revelation in rural Sweden at the end of the 19th century. The red and green dining room, in addition to the yellow, blue and white drawing room, provide iconic images of simplicity that typifies Swedish country style.

Copy and paste l ink to quick-share this post: http://bit.ly/I9AdM5